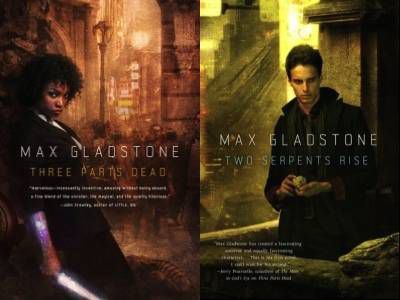 The Fantastic Future Spotlight is a series of posts highlighting writers in the fantasy and science fiction field who are not only producing great work, but are actively contributing to progress and pushing against the norms of the genre.

A new, nervous law student has been accepted to one of the best and most ruthless firms in the known world and must work to figure out the death of a prominent client, doing her best to untangle the deals that led to his demise and how to save his clients in turn. A risk assessor with a gambling problem has a very short window to save the city’s water supply before a rival power takes over the city, not to mention his terrorist father who keeps making things worse. A young, transgender investor has to investigate a leak at her bank and figure out who stole from her, before her superiors make sure she never works again.

Except Tara, the lawyer? She’s a magician, a Craftswoman of incredible power, working to resurrect a dead fire god before the city he powered collapses on itself.

Caleb, the risk assessor who takes too many risks? He’s the son of a terrorist leader who still preserves the True Quechal faith, and his boss is the one who killed his dad’s god. And that’s not even mentioning the power beneath the earth that’s waking up.

And the investor, Kai? She invests souls in artificially constructed gods, benign and harmless and completely invented for all your worshipping needs. Except maybe that’s not all quite true, and what happens if you worship something enough?

Max Gladstone is one of the newest and most compelling voices in recent fantasy literature, and having read the three books he has written so far, there’s no surprise why: His cutting, beautiful prose and his stellar worldbuilding bring the fantastic universe he’s made come to a fully realized life, his plots are rock solid, airtight, and move at a pace that I can only describe as lightning-strikes-from-the-sky fast and his work demands consideration of faith, relationships, family, power and art but never at the cost of accessibility.

Gladstone, for my money, succeeds because he takes fantasy literature to a place where it has only hinted at, by not only flatly rejecting the standard tropes and stereotypes of the genre but also by embracing and exploring diversity in every facet of his writing.

Fantasy often has a certain set of roles: king, queen, knight, assassin, mercenary, fool, soldier, magician, bandit, thief, prince, princess, mentor and so on. While many writers have begun to push and pull against these tropes, Gladstone is one of the first I’ve read to go above and beyond. He pulls inspiration from our world to create a whole new set of roles in fantasy. He brings lawyers, bankers, and risk assessors, corporations, banks, and insurance companies into his world of deadly magical Craft, God Wars and Deathless Kings.

His world is cut and stitched from cultures and worlds far beyond your standard Eurocentric medieval fantasy. There are hints of Aztec, Chinese, and Mayan mythology, touches of breath of many religions color our characters, and more.

The results are refreshing and breath-taking, not only in their application in a fantasy world, but in what it represents to the genre as a whole. There are more than soldiers, queens and peasants, more than Eurocentric and Judeo-Christian myths to draw on. Gladstone happily employs everyone in his stories, and I hope other authors continue this trend.

But more important, Gladstone has shown a wide range of diversity in his work, taking every opportunity to reflect our world for what it is: a place inspired by countless cultures, identities, and norms. The standard of a cisgender, cissexual white male point of view is not the norm in his work; his characters span a wide spectrum of identities and cultures.

Everyone, from the somewhat overweight, dark skinned, happy-but-so-sad poet on stage, to the woman who runs the top levels of the corporation (whose girlfriend happens to be into weird art) are not paint by numbers characters meant to check a box for being there. Everyone is a living, breathing and desperately human character, who Gladstone ably represents in a world of true diversity.

He is a brilliant author that not only creates powerful, thrilling fantasy stories that can appeal to the mainstream, but who does so in a manner that wholly reflects our own world: diverse beyond comprehension, moving toward a complicated future, but built on the bones of a long, storied past.

Gladstone is a writer you need to keep your eyes on, because he’s going to show us the best of ourselves, all of us.

Max’s first two novels, Thee Parts Dead and Two Serpents Rise, are both on sale now from Tor Books. His third novel, Full Fathom Five, will be released this July.