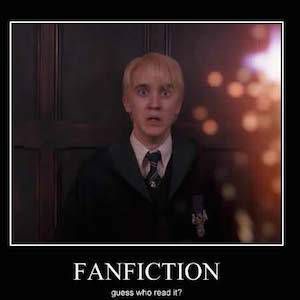 This is a guest post by Syreeta Barlow. Syreeta is a word lover from Atlanta who hordes magazines, edits her text messages, and wants to be a librarian when she grows up. Or more influential on national literacy than Oprah. Either one. Follow her on Twitter @syreetasmiles.

The first time I ever read fan fiction was the day my best friend smuggled a bunch of papers onto my desk while our Spanish teacher was conjugating verbs on the blackboard.  “You have to read this,” she hissed at me before snapping upright as Senora turned to ask mas preguntas.

I lazily regarded the pages she had meticulously printed out and numbered for me, thinking that it was another journal page about her latest boyfriend drama.  But as the rest of my class was hablan espanol-ing, my eyes scanned the words and realized, these pages weren’t the typical fiction I’d read before.  This stuff was about real live people.

Let me pause to date myself, as this particular fan fiction was about none other than the Backstreet Boys.

I fanned (pun fiercely intended) through the pages, skimming long, well-thought out fantasies of girls, and some guys, being chosen to go backstage because they stood out in the crowd, or of Nick as a raunchy police officer, or being Brian’s baby mama (this was, of course, before the term “baby mama” became popular, so fangirl win on that one.)

The stories were smoldering with eroticism, and not just short quips of illicit sex with a star, but were pages and pages of backstory and subplots.  My friend would print out stories almost daily and read them to me as we walked to our lockers in between class.  Another friend of mine started doing the same thing, sharing her love of Buffy the Vampire Slayer stories that mainly coupled Angel and Spike as lovers.

It spread through my group of friends like a brush fire, with almost half of them carrying copies of these stories in notebook folders, producing them as the latest gossip.  “So did you read this one about….?” became the new “So, guess what I heard?” at my lunch table.  And I tried.  Boy did I try to like them.

As we moved toward our junior year, the fiction got a little more sophisticated.  One of my friends tried her hand at writing a fanfic for Dracula, which was required reading in our English class.  She ended up writing a heavily homoerotic piece that became a pretty kick-ass play, but as I read it, I couldn’t help but wonder, “What would Bram Stoker do?”  (WWBD).

During freshman year of college, I was berated by a friend for not having read Harry Potter.  And here, let me pause to proclaim that I have still not read any Harry Potter book, ever.  When Japanimation became anime, my friends had to get each serial episode of their favorite mangas.  My roommate was in love with Nana, and Chobitz, and other weird titles I’d never heard of before.

And I watched it all from the sidelines.  I’m not a Twi-hard (haven’t read that series either), or any other hardcore fan.  I keep promising myself to attend Dragon-Con or Comic-Con one of these years, but I’ve yet to go.  My friends are exuberant, enthusiastic, and they make being a fangirl or fanboy seem exciting and part of an exclusive community.  I even started watching anime in hopes that I could slog through a manga with an ounce of temerity, without feeling like a fraud.  But, still a no go.  I got into steampunk fiction (all on my own, might I add) and really enjoyed the genre.  But I have yet to don goggles and Victorian dress, although that may not be so bad.

No matter how much I desire to be a fangirl, I keep failing at it.  I’m not sure why there is a disconnect, because I’ve been a huge regular person fan of several book series.  I got into L.A. Banks’ Vampire Huntress series years ago, particularly because there were precious few paranormal romance books featuring a black female lead.  But the tragic death of Ms. Banks  led to the untimely end of the series, and with it, my bourgeoning fandom.   I toyed with the idea of continuing the series myself, but I don’t know how the estate of the author would feel about it, and I’m not really sure about the rules of fanfic when it comes to established, published work. I mean, sure, 50 Shades of Grey started as Twilight fanfic, but it held characters and a world all its own.  Where could I, as a faithful reader/writer, bring my own voice to something that I didn’t create?

That’s where my dilemma comes.  As a paranormal romance/anime/steampunk fan, I have all of the ammo necessary to print out and enjoy fanfiction of all sorts.  But there is a blockage, keeping me from enjoying fanfic without thinking about the source material and what the authors really think, and whether or not what I’m reading would have been better as a standalone work, or if legitimate writers need to cling to the backs of published authors to get some footing in the book world.  Part of me knows that there is wonderful fanfic that enriches and broadens its source material.  Part of me even wants to write some of it.  But a bigger part of me is locked out of this community of fandom, as an observer, and never a participant, for reasons that I can’t even begin to explain.

Maybe one day, when I least expect it, while I’m conjugating verbs or waiting in line to get Stan Lee’s autograph, a couple of pages will flutter by, and I’ll find myself engrossed and engaged in fanfiction that will not only make me a believer, but will also make me a true fangirl. And when that happens, don’t be surprised if you hear someone yell out, “Backstreet’s back! Alright!”

What led you to enjoy fanfiction?  Do you feel like a part of a community?  Do people like me seem weird to you?