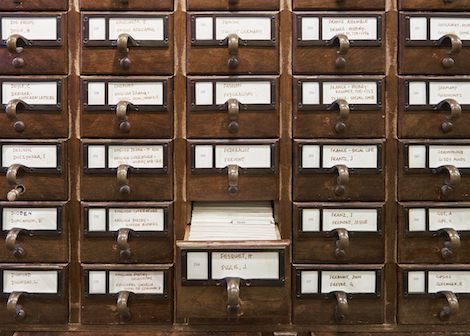 The Library has preserved the circulation records of its membership with a few small gaps, so readers today can work their way through the collection by following the breadcrumbs left behind by readers from the 18th to the 20th century. (Privacy laws prevent the preservation of such records today.) The first decades of records were lost during the Revolutionary War when the British occupied New York, so the earliest records date to 1789. That year the Library reopened in Federal Hall, the meeting place of the first U.S. Congress, and was used by 42 Congressmen and Senators. On April 7, 1790, 14 years before their famous duel, Hamilton and Burr both visited the Library: Burr was reading Voltaire, Hamilton was reading Goethe.

Remember the days of watching old-school episodes of America’s Next Top Model, wishing you could cozy up next to Tyra Banks and her mother, Carolyn London, when the latter would visit the contestants and give the warmest pep talks in reality television history? Now, you can carry those heart-to-hearts with you wherever you go, because the mama-daughter duo is releasing an inspirational book for all of your motivational needs.

On Wednesday, Scribner told The Associated Press that Ward will write an adult novel about an enslaved woman sent from the Carolinas to New Orleans. She will then work on her first novel for middle graders, a “magical adventure” featuring a Southern black woman with “special powers.”