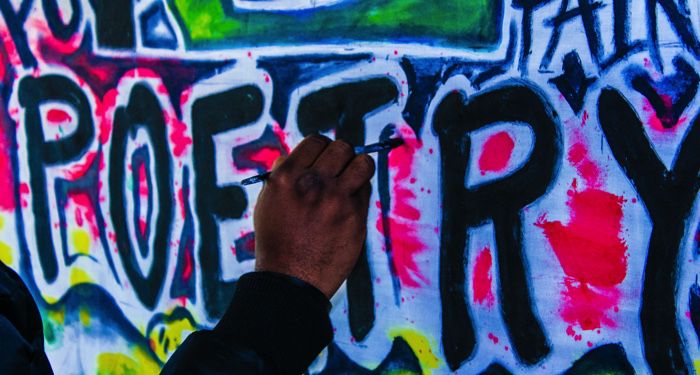 For National Poetry Month, here is a round up of ten very different, but very great long poems. While short poems are great for sneaking more poetry into your life, there is also satisfaction in becoming fully absorbed in a longer poem. Long poems have the ability to tell complete stories, develop characters, and deeply investigate themes. They have more room to weave different elements together. And reading them can be challenging in a good way. Finishing a long poem feels like a major accomplishment.

Because long is a relative term, it’s hard to define exactly what a long poem is. Compared to a 14 line sonnet or a 3 line haiku, a 100 line poem feels long. However, compared to the Sanskrit epic poem the Mahābhārata which has over 200,000 verses, this would feel very short. The long poems listed below range from 400 lines to 10,000. For each of them, the length is not just about the number of words, lines, or pages. The length contributes to each poem’s meaning and message. I might be missing a few of your favorite long poems from the literary cannon, like The Iliad and Paradise Lost. (To be clear I fully support you reading these too!) But from well known poems to hidden gems, all of the poems below are worth investing a big chunk of time in.

Alfred Lord Tennyson wrote this poem as a requiem for his college friend Arthur Henry Hallam who died suddenly at the age of 22. The poem was published almost 21 after Arthur’s death and tracks the journey of Tennyson’s grief. The length of the poem, 2892 lines, adds to the meaning by emphasizing the greatness of the poet’s sadness and how Tennyson continued to mourn his friend throughout his life. The poem includes iconic lines that have become common cliches, like: “‘Tis better to have loved and lost / Than never to have loved at all.” The poem is a good example of British Victorian poetry, both in terms of meter and form. But it also emphasizes friendship as a relationship as important and meaningful as romantic love.

2. Song of Myself by Walt Whitman

It’s hard (maybe impossible) to write about long poems without mentioning this poem by Walt Whitman. It contains famous quotations such as “I am large, I contain multitudes” and “These are the days that must happen to you” and so many more. While these iconic sayings are short, the poem is 1,349 lines in total. Long poems are traditionally poems that tell stories. But Whitman breaks with tradition. Instead, he uses his conversational, stream of consciousness style to ruminate on the ideas of self, identity, and nature. Long, epic poems celebrate a hero who stands out from the rest of a community. But in his poem, Whitman asserts the importance of the common person. He highlights the significant and heroism that exists inside every individual just by existing.

At over 10,000 lines this 19th century poem definitely qualifies as a long one. Elizabeth Barrett Browning was very interested in trying to write an entirely female epic poem. Instead of the traditional 12 books found in the Aeneid and Paradise Lost, Browning chose to include nine books, which some scholars view as a nod to the nine months of pregnancy and other see as a reference to the Sibylline Books. Through blank verse Browning produces a fictional first person account of the title character Aurora Leigh growing up and struggling to find her identity as an artist and poet. Through both form and content, Browning argues for female space and recognition in the poetry sphere.

At 434 lines, this is one of the shorter long poems on this list. I still believe it is substantial enough to belong in this group. It’s also been cited as an inspiration for several other long poems and many consider it to be one of the most important poems of the 20th century. It begins with an allusion to another famous long poem, The Canterbury Tales, starting: “April is the cruelest month.” What follows is a mishmash of hundreds of quotations and allusions from other poems and literature, mixed in with Arthurian legends and disjointed moments of contemporary British life. The Modernist style makes you work hard at understanding the poem…something that can make the poem feel even longer. But rereading lines and looking through the footnotes feels worth it as a message emerges of society dissenting into a chaos that is mirrored in Eliot’s writing style.

5. Montage of a Dream Deferred by Langston Hughes

“Good morning, daddy! / Ain’t you heard?” begins the 75 page long poem describing a 24 hour period of time in 1950s Harlem. The poem also ends with these two lines. But in between the poet describes the daily rhythms, hopes, dreams, disappointments, and subjugations of the Black residents in this New York neighborhood. While the book is broken up into 91 titled sections, the author stated his intentions for the book to be read as one continuous poem rather than a collection. Inspired by Jazz music, one section begins where the other left off. And the different music styles also influence the form and style of writing within. One section titled “Harlem” is probably the most famous part of the poem. But, if you get the chance, the whole book is very worth reading altogether as Langston Hughes intended.

6. “The Anniad” in Annie Allen by Gwendolyn Brooks

Annie Allen is a story told in verse about a Black girl growing up. Gwendolyn Brooks won the Pulitzer Prize for the collection in 1950, becoming the first Black poet to receive the award. Annie’s life is broken into three sections. The middle section, “The Anniad” is often described as a mock epic. The tongue in cheek title references Homer’s Iliad. It describe’s Annie’s quest to fall in love in the midst of America going to war. And the poem simultaneously mocks the machismo of traditional epic poetry while remaining a genuine exploration of emotions. Annie’s quest to hold onto her grand ideas of love throughout the poem is elevated by its literary connection with the hero’s journey. And she goes through a transformation of consciousness by the end of the 43 stanzas. The language is intentionally dense, but what Brooks accomplishes in this poem works on so many levels.

7. A Woman is Talking to Death by Judy Grahn

At 514 lines, this is another of the shorter long poems I’ve included on this list. At 17 pages it definitely doesn’t feel short! And the poem can be described as nothing less than ambitious for the number of topics and themes it tries to weave together through this rumination on death, love, and dehumanization. Judy Grahan is an important figure in both feminist and queer poetry movements. This landmark poem starts with the narrator viewing a fatal motor cycle accident on San Fransisco’s Bay Bridge. What follows are differing recollections of death, police violence a brutality, and homophobia. But throughout, almost struggling against this despair, are assertions of the power of love.

This book length epic poem uses allusions to Homer’s Iliad and Odyssey to capture a story about the displacement and suffering of Native Africans and Indigenous Americans as a result of European colonization and enslavement. The poem is 8,000 lines long, and unlike most epic poetry jumps around in both perspective and time period. The form varies but is mostly composed of loose combination of three line rhyming stanzas, also known as Terza Rima. I say loose combination, because Walcott allows himself to break the form about as often as he follows it. The undertaking of this large epic was considered a huge risk in 1990 when he published it. But now the work is considered the masterpiece of Nobel Prize–winning, Caribbean poet. Walcott is masterful at weaving together his own biography and culture with the archetypal characters from Homer’s epic poetry.

9. Pinion: An Elegy by Claudia Emerson

This 55 page work also uses poetry to tell a story through multiple perspectives. However, this time it is the character Rose imagining the voices of her older siblings Sister and Preacher. Rose is the one who made it out of their 1920s rural tobacco farm. This is something both her brother and sister desperately wanted and never achieved. As the only surviving family member she looks back on her childhood and what the farm meant to her family. Rose’s survivor’s guilt comes through on the page, as well as Sister and Preacher’s bleak lives filled with suppressed longing. It is not a happy story. But it’s certainly a feat to tell a complete Faulkner-esque story within the confines of an epic poem.

In this award-winning, book-length poem, Claudia Rankine contemplates the Black American experience and delivers a biting critique of racism. The lyrical blocks of prose poem address issues ranging from the poet’s experience with microaggressions, the racist treatment of Serena Williams, the murders of James Craig Anderson and Trayvon Martin, the verbal error during Obama’s first inauguration, racism and language, and more. Between the sections of writing are photographs, drawings, paintings, and screen grabs depicting Black life. This poem is in your face and unapologetic while explaining the everyday racism that is ever present in a “post-racial” United States.