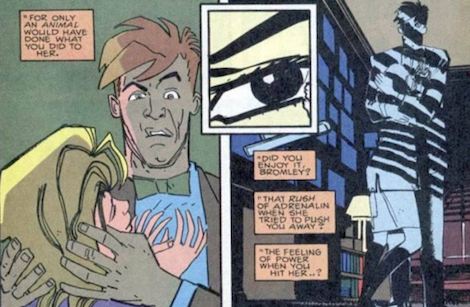 You know it’s pretty bad when a DC comic book villain shows more empathy for a rape victim than real people on Twitter do. Yes, I read the comments. Yes, stupid me. Between the urge to shove my hand through my phone and choke the ‘tweets’ out of them and my desire to just sit in a shower and wash it all away, I instead did what most of us here would do: I took a breather and escaped into a book. While part of me seethed at the emotional black-holes of ignorant false feminists telling survivors of sexual assault they should have done better, another part of me wished we had more Scarecrows in the world.

It started with Mayim Bialik’s NY Times piece, how she protected herself against sexual assault in Hollywood. While she didn’t exactly say “but what were you wearing?” the entire article sounded like her own magical formula against being a victim.

I’m going to be brutally honest: it infuriated me. Once again, someone was bringing the responsibility of “fixing” rape culture back on the victim. I.e., look at my example and I was never raped. If you were just like me, you could have avoided it too. You may as well say because I wear tinfoil on my head aliens have never abducted me, follow my example and you won’t be abducted either.

That’s right. In Bialik’s perfect ridiculous world, only females who dress provocatively and act flirtatiously will attract the monstrous gaze of those who are merely answering the call. So long as you listen to your mother’s advice on men (“They only want one thing“), you will be kept safe from that circle of evil people. When the recognition should be evil people do evil things and we should all work to weed out the evil people.

I read the whole damn article. Twice in fact—because I could not believe someone was claiming to be a “feminist in Hollywood” while repeating the same … I want to say bull$#@&, but I’m trying to keep my writing PG. I may have hate-read it the second time. 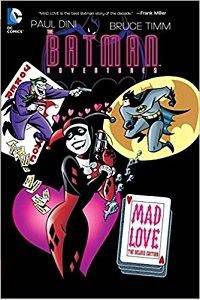 Nope, I was incandescent with rage! I had to step away from the real crazy in this world and hide in the comfort of the fictional crazy of another world. I pulled out my copy of Batman: Mad Love and other stories (Dini/Timm). Not my favourite, but I needed something crazier than current reality and Harley Quinn has crazy in spades.

Imagine my surprise when I reach Scarecrow’s Study Hall, in Going Straight (found in The Batman Adventures: Annual #1, circa 1994). A short story, containing more empathy for rape survivors than Bialik expressed in her ‘feminist’ article.

Scarecrow, the Master of Fear, knows what fuels the monsters of sexual assault. He is usually the villain who revels in terror and dread. In this story, he is trying to reform. He is ‘going straight’. He is also the friend and support Molly seeks after her “date” with Bromley. As a friend, Dr Crane comforts Molly through the shock of Bromley’s brutal attack on her. But as Scarecrow, he recognises the fear now seen in Molly’s eyes and knows the kind of monster who put it there.

Oh, and for the record: Molly is wearing a knee-length skirt with a conservative sweater top and jacket, and is presented as a studious attendee at the university. Is this important to the story? No. And it never should be. It is not clothing or behaviour that leads to sexual assault. The fault falls squarely and wholly on Bromley, and every other sick perp like him. Scarecrow knows how Bromley fed off the power over, and intimidation of, Molly. Fear is Scarecrow’s domain but even he is disgusted with the act of violence perpetrated by Bromley. It is not about anything Molly did. It is purely about Bromley’s attack on Molly. 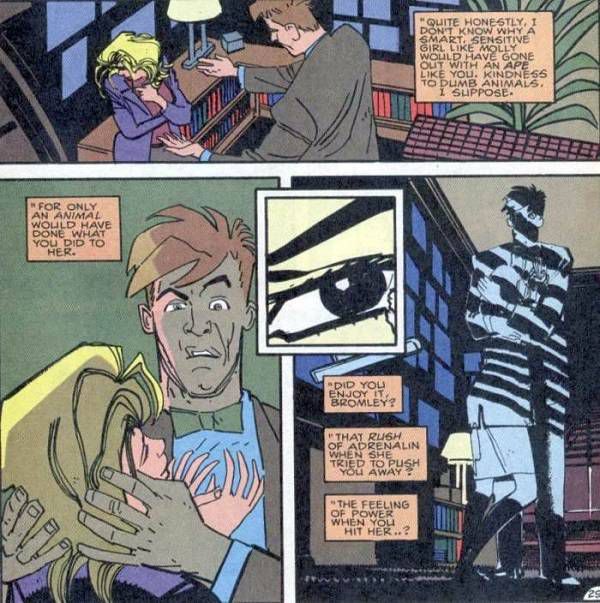 That just might makes this version of Scarecrow more of a feminist than Bialik. How’s that for fear-inducing? How is it, this fear has not caused us to rise up against it? To put up with it and the longest, sickest running joke of Hollywood. It’s not like we haven’t heard the stories before. From Marilyn Monroe to Courtney Love to Amber Tamblyn and the ever-growing list of #metoo. Distinct experiences where there has been a sexual attack on our person, a threat of sexual attack, or the implied power-tripping that makes us think there is no other option. Others are trying to drive change and bring stories into the light… And instead, we are still being handed the constant criticism for the survivor to change their ways.

We should all be saying “HELL, NO”. Change the culture, change our rape culture. Do not tell me to change ME to placate your weakness and your guilt. I am not your problem. The problem is inside every perpetrator, every monster who is waiting to feed on the fear of their next victim.

Bialik states in her article, she ‘knows’ her advice might be upsetting to feminists. Well, she’s right–but for all the wrong reasons. What is truly upsetting is how she places the responsibility of ‘avoiding rape’ on the woman. That is not empowering; it is blaming. That is not preventative; it is reactive. And by aiming it at women, Bialik joins the sad group of false feminists who are making the issue worse.

One last note: Reading Study Hall reminded me of an art installation at Kansas University, ‘What Were You Wearing?‘ It is a shocking display of 18 outfits hanging next to 18 rape survivors’ stories. The exhibit is a confronting statement on the ridiculous excuse that clothing invites sexual violence. The display includes a black skirt with a red sweater, a male’s T-shirt with cargo shorts, and a six-year-old’s sundress.

And in case you miss it, next to the male’s outfit: “…no one has ever asked me that before. They ask me if being raped means I’m gay or if I fought back or how I could let this happen to me; but never about my clothes.”

So Mayim Bialik, the next time you want to preach about your miracle cure to save us all from sexual assault, ditch the strawman and instead visit Kansas University.

No-one ever does anything to invite sexual violence. Even a fictional psychopath called Scarecrow understands that.