Nobody has a perfect memory, and I don’t expect a memoir to exactly quote every word of dialogue that happened decades ago. I fully expect the memoirs I read to rework reality into a narrative, because a perfectly accurate memoir would just be a meticulously documented bore. There’s a good discussion to be had about where the exact line is between a memoir and a fictionalized account—about how much editing of the facts it takes to steer a book firmly into the Fiction section—but there certainly is a line, and some books use that line as a jumping off point. I was delighted to stumble on the Wikipedia list of fake memoirs and journals, and I highly recommend checking it out, but I wanted to highlight some of the most egregious examples. 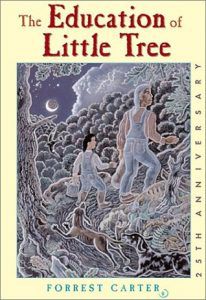 The Education of Little Tree describe’s Carter’s childhood being brought up by his Cherokee grandparents and taught how to live in peace with the land, upholding Cherokee values. He describes his brief time at residential school, as well as his adolescence and, eventually, his striking out on his own after his grandparents’ death. It won the first American Booksellers Association Book of the Year (ABBY) award. The paperback hit the New York Times Bestseller list. It’s still being assigned in schools!

What’s so outrageous about this fake memoir? Asa Carter was a KKK member. He was a speechwriter for Alabama governor George Wallace, and the wrote the line “Segregation now, segregation tomorrow, segregation forever.” He ran against Wallace for governor himself, believing Wallace to not be segregationist enough.

Carter’s family has asserted that he does have Cherokee ancestry on his maternal grandmother’s side, but members of the Cherokee nation have (unsurprisingly) critiqued the book for having inaccurate and stereotypical representation. For one thing, the “Cherokee” words in the book are not from the language: they’re just made up!

Little Tree is not the only memoir where an author falsely claims to be indigenous: check out the Book Slut article Fake Memoirs and the New Racial “Passing” for more. 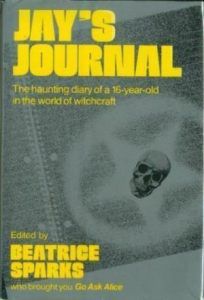 Go Ask Alice is a notorious piece of anti-drug propaganda in the form of a “found” teen diary. In reality, it was fabricated, likely by multiple people, and it doesn’t take a lot of close scrutiny to realize that it doesn’t resemble a real teenager’s diary. (Check out the Snopes page on it for more.) Its notoriety continues, however, because its sensationalism makes for some juicy reading as a teen. This is not the only diary that Sparks “edited” (fabricated), however, and I am particularly interested in Jay’s Journal.

After Sparks’s fame grew from Go Ask Alice, a woman reached out to her to edit the journal of her son, who had recently committed suicide. He had questioned their Mormon religion, experimented with drugs, and had criticized the government’s involvement in Vietnam. His mother hoped that his journal being published would discourage other teenagers from straying from tradition. Beatrice Sparks accepted the journal, and then completely fabricated a story about being drawn into Satanism. Only 10% of the original journal entries make up the finished book, Jay’s Journal.

In one passage, Jay’s Journal describes a Satanic marriage between him and his girlfriend, “Tina.” They exchange blood through cut tongues. They sacrifice a kitten and pledge eternal slavery to each other. The real “Tina” describes their mock ceremony differently:

When I was a little girl…there was this statue of Jesus in the cemetery. … That statue [was] a great comfort to me. … I wanted to get married in front of it. … We went there, and he had this prayer rug, and we both knelt there holding hands for several minutes. Then we kissed each other and left. There was nothing satanic about it.

Alden’s family was tormented by the book’s popularity. His mother found a dead animal in her mailbox. His tomb was defaced and stolen. Sparks says she regrets writing the book (while asserting that it’s truthful), but it remains in print.

3. In his Image: the Cloning of a Man by David Rorvik 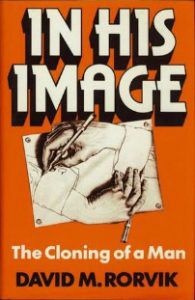 David Rorvik was a medical reporter for both Time and the New York Times, so when he wrote a book that claimed he cloned a millionaire in the 1970s (and had the book published by a respected medical publisher), he faced less skepticism than you might expect.

The process Rorvik describes loosely resembles an experiment done in the 1960s that cloned a frog—a process that it was known would not apply to mammalian biology. J. Derek Bromhall sued Rorvik for defaming him by citing his research. In the court case, he failed to produce any concrete evidence that the cloned boy existed.

David Rorvik never wavered in his assertion that this book is true, and that he was merely protecting the identity of the cloned man. 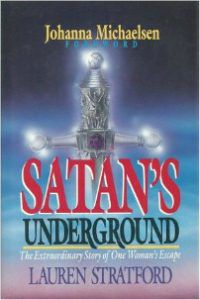 Unlike most of the other fake memoirs on this list, which seem to have been written for money or fame (or both), the author of this book clearly is not mentally well, and that makes this story sadder. Satan’s Underground was a story that played into the ’90s Satanism scare, in which Willson claimed to have been brought up in a Satanic cult. She said that she had been forced to have multiple babies for ritual sacrifices. She then says she was saved by Christianity.

After it was revealed that the story was false, Willson legally changed her name to Lauren Stratford and claimed to be a Holocaust survivor. She even collected money meant for Holocaust survivors. You can read more (though it’s not a pleasant read) at Cornerstone.

5. The Cradle of the Deep by Joan Lowell 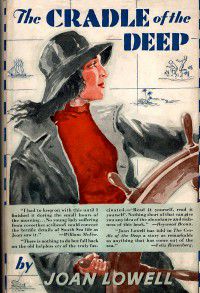 Marking the only one of these fake memoirs that I now want to read, The Cradle of the Deep is a 1929 childhood memoir about a girl who was raised on an all-male ship by her sea captain father, from 11 months until she was 17. She has a pet seagull named Salt Pork. She helped amputate a sailor’s arm. She saw a shark eat a man alive. The story ends with Lowell swimming away from the burning ship with kittens clinging by their claws to her bare back. It was a Book-of-the-Month Club selection. She was interviewed, photographed, and her publisher threw a huge party for her.

After the book came out, Lowell’s family reached out to the press with some confusion. She had been raised in a suburb in Berkeley. She did have a sea captain father, but her trips on the boat had been short, and she’d been accompanied by her mother. The ship was still intact.

Lowell’s response was unapologetic: “Any damn fool can be accurate—and dull.”

I’ve included just the books that I think are outrageously fake memoirs, but it’s a much longer list if you’re looking at all fake memoirs. In addition to faked indigenous memoirs, fake memoirs where the authors claim to be Holocaust survivors or to have suffered in wars are particularly popular choices. It’s amazing how brazenly these people can exploit others’ suffering in hopes of fame and fortune.

If you’re looking for more fiction masquerading as fact, check out:

Nonfiction Books That Should Be Reshelved as Fiction