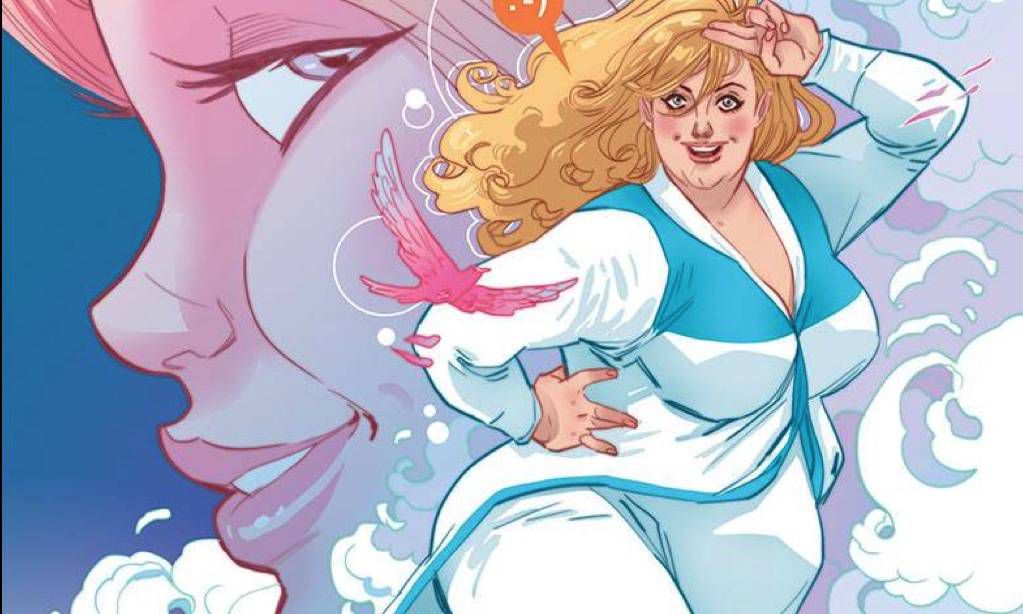 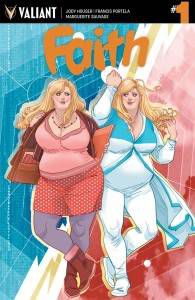 In January, Valiant announced that the preorders for Faith #1 (the first issue of their four part miniseries) were so stellar that they sold out on the distributor level and would be putting out a second printing immediately. That puts a certain level of pressure on the book to be as good as the presale numbers, since plenty of readers want to meet this character.

Yet Faith is by no means a new character — her first appearance was in 1992’s Harbinger #1, also produced by Valiant. She was a main team member in that book, showed up in other books throughout the 90s and 00s and was back on her team in a revival of the Harbinger series in 2012. Sometimes she’s known as Zepplin. Sometimes, like in this series, she’s Zephyr. But she’s always Faith and she’s always been a plus size woman (although looking at some of the art from earlier comics, how some artists have interpreted her size is … questionable, even if she was clearly a larger woman than the other female characters).

Despite the characters’ 20+ year history, this is still the first time Faith has her own solo series, and that’s a big deal. Because of that, I went into reading the first issue without diving too much into her past appearances first — like so many readers picking up this book, this was my first introduction to Faith Hebert. 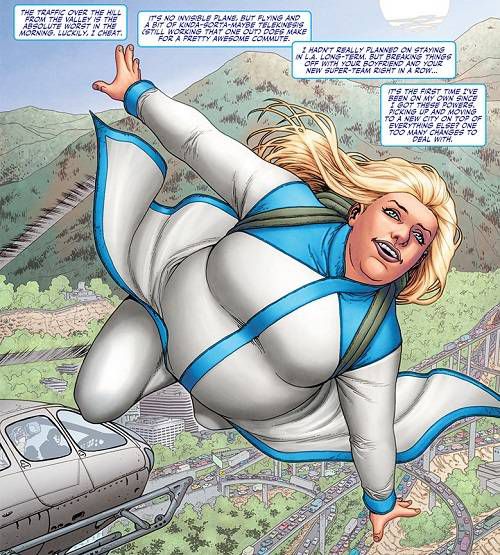 Folks, I already love her. Writer Jody Houser puts us into Faith’s head almost immediately and it’s hard not to like our protagonist right off the bat.

For one, Faith is a nerd. One of the first panels of Faith herself in this issue puts her studio apartment on display and you can see it just filled to the brim with nerd toys and decor, including a Furiosa poster in the corner. She talks about finding an awesome comic shop after moving to her new city. And her alter ego? Works as a blogger for a pop culture/nerd culture website. By these things alone, I relate so much to this character. I mean, look at the site I write for — clearly a comic-loving pop culture blogger is going to be a character I connect with. Faith is the nerdgirl-turned-superheroine you’ll be wanting to root for right alongside Kamala Khan.

But there’s more to her than just being nerdy. She’s been a hero for a good while now with her old superhero team and just recently chose to leave them, move to Burbank, and make her own path. She broke up with her boyfriend as part of the move and is maybe on the cusp of thinking about her love life again. She’s happy where she is at her alter ego’s work, but she wants to get her solo hero work going now that she’s in a brand new city. Mostly, she wants to do good, help people, and be the best hero she can be. I like Faith in this issue — she’s the kind of protagonist I would want to follow past this four part series into an ongoing.

High praise goes to the art team here. Superhero comics get a deserved bad rap for their female character designs. It’s sad that an artist drawing a realistically plus size heroine in a mainstream superhero comic is still considered radical, but it really is radical for the genre. Francis Portela does right by our protagonist here.

Praise also goes to the other artists on the creative team. There’s a soft spot in my heart for Marguerite Sauvage, who is the artist in charge of Faith’s daydream sequences sprinkled in the issue. Her art tends to lean towards very pretty character designs, and in Faith’s daydream everything (and everyone) is quite pretty. It works. There are a few particularly fun panels from one of the fantasy sequences involving Faith heroically swooping in and saving a hunky movie star whose full name isn’t confirmed … but is clearly supposed to be Chris Evans.

For the main part of the book, Andrew Dalhouse’s color work brings out the best in Portela’s lineart, really highlighting Faith’s positive attitude in her daily life with bright hues and contrasting that with the dark shadows in the more sinister situations she faces. Oh right, the sinister situations. The issue sets up what is clearly going to be the overarching plot of this four issue miniseries. It’s all very spooky and mysterious and I’m sure what’s going on will reveal itself in time. It was a necessary part of the issue but not the thing I got excited for, if that makes sense.

If I had any other criticism, the inner narrative by Faith was just edging into being used too often. It makes sense to set up the status quo and help us get to know Faith right off the bat, but I hope Houser keeps a light touch with that storytelling device going forward in the miniseries. And I also hope the comic readers who contributed to the huge preorders of this first issue keep buying the upcoming issues so this miniseries might turn into something bigger.