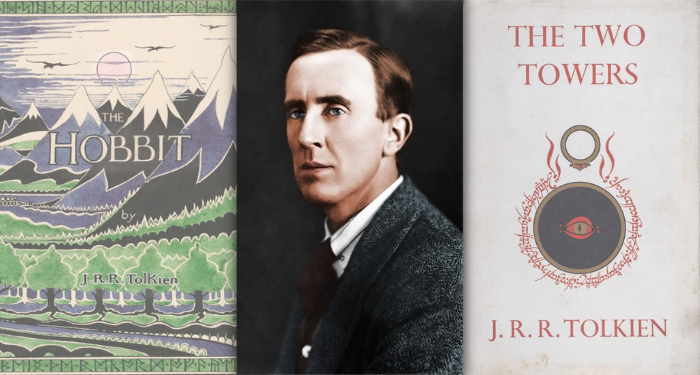 J. R. R. Tolkien is one of the most widely read authors in the world. The Hobbit and The Lord of the Rings set the tone for all western works of epic fantasy that were to follow, yet the intricate world building and attention to detail in his books remain unparalleled. I had read and loved Lord of the Rings, but knew next to nothing about its author. So engrossed I was in his fantasy world, I probably would not have been able to even recall his full name, had someone asked while I was reading the books. Recently I came across his biopic on a streaming platform and decided to give it a try. The movie was not up to my liking, but Tolkien’s life intrigued me. I picked up J. R. R. Tolkien: A Biography by Humphrey Carpenter, and here are some of the interesting Tolkien facts that I found.

Tolkien Was Born In South Africa

He Was Addressed as Ronald By His Family

The name Ronald was chosen by Tolkien’s mother Mabel, and had no family precedent — both his grandfathers were called John, and Reuel was his father’s last name. Ronald became the name that J.R.R. Tolkien’s family addressed him by.

He Lost Both Parents Early In His Life

Mabel moved to England with her sons in 1895. Arthur Tolkien died of rheumatic fever in early 1896, before he could join his family. Mabel singlehandedly raised her sons until 1904, when she died of diabetes — a fatal condition prior to the discovery of insulin. Tolkien was 12 years old at this time.

Tolkien’s Mother Ignited In Him His Passion for Languages

Tolkien’s mother was his first teacher. When she introduced Tolkien to the basics of Latin before he even started school, his lifelong passion for languages was ignited. She also nurtured his interest in plant life by instructing him in botany. Mabel had converted to Catholicism despite opposition from her family, and the Catholic faith remained an important part of Tolkien’s life. Mabel had left the upbringing of her sons to her good friend Father Francis Xavier Morgan, who supported Tolkien and his brother on their journey to adulthood.

Tolkien Loved Making Up Languages Since His School Days

He Was Disappointed in Shakespeare

Tolkien disliked having to study Shakespeare in school. Carpenter records his especially bitter disappointment at the coming of the “Great Birnam Wood to High Dunsinane Hill” in Macbeth having been merely rhetorical, and his longing to create a setting where trees actually marched to war — which he achieved several years later with Treebeard.

Tolkien and His Wife Edith Had an Epic Love Story

Tolkien met Edith Bratt when he was 16 and she 19, at one of the houses where Tolkien stayed with his brother after the death of their mother. The struck up a lively friendship which blossomed into love. However, Tolkien’s guardian, Father Francis, was disapproving of the relationship and insisted that Tolkien concentrate on school. Eventually he forbade his ward to see or correspond with Edith until he came of age — an order that Tolkien was unable to disobey, given Father Francis’s kindness towards him and his brother. Tolkien and Edith were separated for three years.

Immediately after he turned of age, Tolkien sought Edith out and asked her to marry him. Edith agreed, breaking off a previous engagement. They got married with the blessing of Father Francis, not long before Tolkien was called up for the First World War. While their married life was not without day to day frictions, Tolkien and Edith remained devoted to each other until her death in 1971.

Tolkien’s Friends, and the Clubs They Formed Together, Were Very Important To Him

Tolkien treasured his friendships. While attending King Edward’s School, Tolkien, along with Christopher Wiseman, Robert Gilson, and Geoffrey Bache Smith formed the T.C.B.S, etc: the Tea Club and Barrovian Society. They were brought together by the love of Latin, Greek, and tea drinking, and this association was a large part of Tolkien’s intellectual development in his youth. He formed multiple clubs in college, both as a student and then as a teacher. Later in his life, the informal literary discussion group called the Inklings, which also included C.S. Lewis and Charles Williams, provided him a platform to discuss his work.

During the war, Tolkien signed up and specialized in signalling, in order to utilize his penchant for words. He was sent to the front in France in 1916, during the Battle of the Somme. He experienced the horrors of trench warfare first hand, but remained unhurt. He was finally sent back to England when he contracted Trench fever, and was unwell for most of the rest of the duration of the war. The war had a profound impact on Tolkien. He lost all but one of his T.C.B.S. buddies to it. Only Tolkien and Christopher Wiseman reunited after the war. He was also humbled and awestruck by the courage of the common English soldier. According to Carpenter, Tolkien later wrote “My ‘Sam Gamgee’ is indeed a reflexion of the English soldier, the privates and batmen I knew in the 1914 war, and recognised as so far superior to myself.”

He Briefly Worked On the Oxford English Dictionary

Tolkien’s first civilian job after the war was at the Oxford English dictionary, where he started with research for the etymology of the words warm, wasp, water, wick, and winter. He left in 1920 to pursue his academic career.

By 1917 Tolkien had developed Quenya, an elvish language that he had invented to a great degree of sophistication. From it, had emerged another elvish language that he called Sinadrin. His invented languages now required a history to be truly alive. Tolkien’s quest to uncover the history of the languages he had invented, and his grand ambition to create a mythology for England, led to the inception of The Silmarillion.

Carpenter quotes this recollection from Tolkien about the genesis of The Hobbit:

One of the candidates had mercifully left one of the pages with no writing on it (which is the best thing that can happen to an examiner) and I wrote on it: “In a hole in the ground there lived a hobbit”. Names always generate a story in my mind. Eventually I thought I’d better find out what hobbits were like. But that’s only the beginning.

Tolkien Considered Himself a Hobbit

Of all the fictional beings that Tolkien had created, Tolkien identified with hobbits the most. In Carpenter’s biography, he is reported to have written:

I am in fact a hobbit, in all but size. I like gardens, trees, and unmechanized farmlands; I smoke a pipe, and like good plain food (unrefrigerated), but detest French cooking; I like and even dare to wear in these dull days, ornamental waistcoats. I am fond of mushrooms (out of a field); have a very simple sense of humour (which even my appreciative critics find tiresome); I go to bed late and get up late (when possible). I do not travel much.

When Tolkien set out to write a sequel to The Hobbit, Bilbo’s nephew was called Bingo, after a family of toy koala bears owned by his children. However, as the writing progressed and what later became The Lord of the Rings attained a darker tone, Bingo became Frodo.

I have saved the best for the last. Tolkien was known for his rather schoolboyish sense of humor, and, as told by Carpenter, “he would dress up as an Anglo-Saxon warrior complete with an axe and chase an astonished neighbour down the road”.

Enjoyed reading these facts about our favorite literary wizard? Check out our J.R.R. Tolkien archives for more on him and his works.