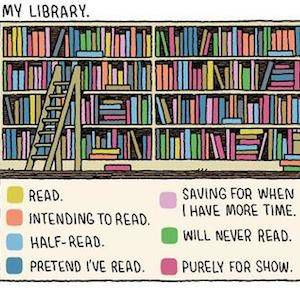 A little while ago,  I saw this comic published by the amazing Tom Gauld. And I looked at it and gave a chuckle…but then I started thinking about it, and applying it to my own bookshelf (because if there’s one thing I can do, it’s take something that has nothing to do with me and make it all about me. No, shut up, enough about you, let me tell you how I feel about that…).

I thought it might be interesting to treat it as a series of questions and point it at my own bookshelves.

Read? This is toughest because, what, do I list the bazillions of books I’ve read? So instead, I’ll go with the last book in my reading journal which is Star Trek: Lost Souls, by David Mack, third in a trilogy he did. Excellent novels in their own right, not remotely the dashed-off fan-service that some people seem to associate with tie-in novels. I’ve been doling the trilogy out to myself since the beginning of the year and am now sorry to have finished it. Leaves me wanting to read more tie-in books. I grew up on them and wandered off eventually. Now, I’ve wandered back. There’s a Doctor Who novel on my shelves, waiting for me.

Intending to Read? The Name of the Rose by Umberto Eco. It’s been on my shelf for a bit now, and I am already pretty sure I’m gonna love it. Some books resonate in such a way, you can just tell it’s a future favorite, and I have high hopes. It’s been catching my eye a lot recently, though, so I think it’s moving rapidly up the to-read pile.

Half-Read? The Dark Tower series by Stephen King. I’ve read about half of this, four out of the seven books. I enjoyed them okay, and I own the rest, but I just never seem to get to them. Even when I go on my Stephen King kicks (the only way I read him. I am either all-King or no-King. There’s no middle ground. An example of this is, Doctor Sleep is owned and untouched, waiting for a King phase). I keep meaning to finish reading the series, in part because I enjoyed the first few and in part because I’d like people to stop yelling at me about it.

Pretend I’ve Read? I used to really worry about how people felt about my reading level, so for ages, I pretended to have read Shakespeare. This was easy to do, since I could do some quotes (Thanks, Star Trek) and discussing it online means always being able to pause and look stuff up before replying. Then I got older and less interested in such bullshit…and also I actually read Shakespeare. Now I can talk about it happily…but remembering my own worries, I am kind to people who haven’t. This isn’t a test. You don’t fail reading or life or being smart if you haven’t read Shakespeare, or Proust, or whatever.

Saving For When I Have More Time? Speaking of Shakespeare, I’ve had Shakespeare: The Biography by Peter Ackroyd sitting on my shelf for ages now. I love biographies, I like Peter Ackroyd’s biographies a lot, I like William Shakespeare and enjoy the shorter biographical things I’ve read about him. I’m excited to read this every time I look at it. But…Ackroyd biographies are dense, and this is a big one, and so I keep involuntarily bumping it down the to-read list until I’ve got more time (read: more functioning brain cells). Since I suspect that’s never going to happen, I clearly need to knuckle down and dig into it.

Will Never Read? Quicksilver by Neal Stephenson. I think it’s getting to be time to admit that I think I like Neal Stephenson’s books more than I actually do. I like Neal Stephenson a lot, have read and heard tons of interviews with him over the years. I like the premises of his books an awful lot…but in all the years I’ve owned it, I’ve made it exactly halfway through Anathem…twice now. And that’s the one I was most excited for. Yet knowing this, I went and bought Quicksilver, and here it sits, a home for wayward dust-bunnies.

Purely For Show? The Silmarillion by J.R.R. Tolkien. I’ve owned a gorgeous oversized hardcover for years, luscious and beautiful, full of amazing illustrations Ted Nasmith…and I don’t think I’ve read more than five pages, cumulative, over the years that I’ve owned it. I just don’t care. High fantasy isn’t that interesting to me, I enjoyed reading The Lord of the Rings once, but liked the movies more and never managed the books again. I enjoy Christopher Tolkien’s nonfiction books, essentially performing archeology on his father’s life and work. That’s about it. Yet it keeps living on my shelf, because it’s big and beautiful. I should get rid of it. I haven’t. I’m so shallow. Don’t judge me.

Read But Can’t Remember A Single Thing About It? Ice: The Nature, History, And The Uses of An Astonishing Substance by Mariana Gosnell. A big thick book all about everything you could ever want to know on ice, everything science and cultural and so forth. And if I’m being vague it’s because…I can’t remember a goddamn thing out of the book. It’s eye-catching, so people comment on it and I am so weird talking about it, they assume I have no idea. And I don’t! Why did nothing in it stay in my head? I know a couple of ice facts, and they’re both from episodes of the show QI. It’s like the book just bounced off. I swear to you, I read it.

Wish I Hadn’t Read? Olympos by Dan Simmons. I’m weird about Dan Simmons, and Olympos was where I realized this. I read The Terror, Drood, and Ilium in short-order and was insanely enthusiastic about him and his works. Then I read the sequel to Ilium, which was Olympos…and it all fell apart. An insane book that just gets more insane. A spaceship shaped like the Empire State Building being flown by aliens, powered by coke-can-designed a-bombs that fly out the back. A woman who can only be woken from stasis by a man having sex with her inert form. Other crazy stuff, but I’ve put most of it out of my head at this point. I’ve tried and tried with other Dan Simmons books, and I haven’t hit it off with a single one since this point. With Black Hills, I kind of just gave up. I regret reading Olympos, because up til that point, I really loved Simmons. I wish the souring hadn’t happened. I still revisit Drood regularly (it birthed my passionate, ongoing interest in the life of Charles Dickens) but that’s about it.

And there you have it. Me, working through a cartoon. It’s a fun list, and a fun way to spend an afternoon, digging through your bookshelves on behalf of a handful of questions. You should go do it too. Look, it beats going outside and being around people and stuff.