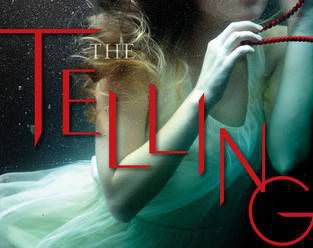 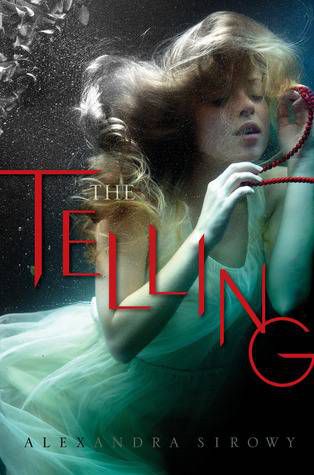 Looking for a suspenseful, creepy summer read? Check out Alexandra Sirowy’s The Telling, and read the exclusive excerpt below!

Lana used to know what was real.

That was before when her life was small and quiet.


Her golden step-brother, Ben, was alive, she could only dream about bonfiring with the populars, their wooded island home was idyllic, she could tell the truth from lies, and Ben’s childhood stories were firmly in her imagination.

After has Lana boldly kissing her crush, jumping into the water from too high up, and living with nerve and mischief. But after also has horrors, deaths that only make sense in fairy tales, and terrors from a past Lana thought long forgotten: Love, blood, and murder.

My before predates Ben’s death and my after postdates it. I have a prologue that I guess could be defined broadly as the whole history of the universe and as narrowly as my mom and dad meeting, falling in love, marrying, and ending up with me. I don’t know those parts all that well, so I won’t tell them. I guess by the same logic I’ll have an afterword, and it will go on once I’m dead and can’t dream or think anymore. All that does is make me panicky as a caged animal.

The story I know well starts when Mira McBrook drank two bottles of Sancerre, swallowed three antidepressants, kicked off her black satin pumps, told her four-year-old daughter that she was tired of pretending, and jumped from the upper terrace to her death.

It was dusk and Daddy was on his way home. The french doors to the kitchen were open and he heard me screaming as he came into the house.

Dad and I did fine without Mom. We mourned appropriately, and when it was time to move on, we did. I was a lonely kid, but it had nothing to do with Dad not being there. He often was. And when he wasn’t, a babysitter was there to entertain me or I was getting bossed around by Mariella, who cooks and cleans for us and has a talent for making her voice heard over the roar of the vacuum. Sure, I pine for some people’s moms. All motherless girls do that.

Six years after Mira McBrook said good-bye in her strange way, Dad met Diane away on business. They dated mostly over the phone. Dad was lonely, romantic, and impulsive. He proposed. The day I met Ben was the day they arrived to move in. The wicked stepmothers and bullying brothers I’d seen on TV didn’t exactly send me bouncing to greet them. Diane turned out to be a bird-boned brunette, younger-looking than the moms at school, with a sweet smile and a way of speaking that made me think of air escaping my bike tires. She brushed my braids from my shoulders, and I saw that she was missing the middle finger of her right hand. I liked her more for the mystery.

Ben slunk from their van gripping a cat carrier. He blinked at me with these giant eyes and a tear-streaked face. He was all uneven, his limbs too skinny for his big, round joints, and he trembled while angling the hissing tabby between us.

“Hello,” he whispered, hardly louder than the cat. He was almost two years older yet a billion times more afraid. Instead of threatening him with the knitting needle I’d commandeered and was holding at my side as a sword, I took his hand and showed him to his room. I didn’t want a brother before I met him, and then once I had, imagining life without him was like laughing with one lung rather than two.

Most siblings want to be different. They want to say this is me and that is you. But we were amateur brother and sister from the start. Both survivors of things we didn’t want to talk about. Instead of crying over what we couldn’t change, we reinvented ourselves as two kids who had, and only needed, each other.

We wanted secret messages spelled out on scraps of paper, hidden in places only the other would look. We wanted fireworks on the Mira; Decembers spent festooning her sails with sparkly lights; gingerbread house–decorating with Diane and Dad after they’d had too much eggnog to care about us pouring ourselves glasses; and weeknights when Ben and I ate dinner on the upper terrace, the Scrabble board between us, the sun fading to chalky rose behind the tree-logged hill.

We wanted traditions and inside jokes and family pictures and secrets. We wanted to belong to each other, and so we did. Do. Present tense intended.

If I am a story, then Ben is also. His prologue is a mystery to me. Did his mother fall in love and marry his father? Where was Ben born? I know pieces. One year he and Diane lived in a double-wide trailer with a car thief neighbor. The next they stayed in a mansion with an ancient plot of graves on the grounds and a giant bloodstain on the floor of the ballroom. Ben talked about nests of fiddler crabs in marshlands, fortune-telling bag ladies in Savannah, and men dressed up as women singing opera on the street corners at night.

But: Where did the inspiration for his stories come from? All those marauding villains with their insatiable appetites for screams and blood weren’t born out of air. You had to be sneaky asking Ben about before Gant. I understood he didn’t want to talk about it. I didn’t want him to have to, just sometimes the curiosity got to me. Ben would laugh and say, “When we met, you were holding a knitting needle at your side like a sword. Trust me, the stories don’t take that much imagination.”

Ben had imagination for days.

Perhaps more than imagination, Ben could play the shadows. He knew what words to use to make you laugh; he knew ten more to make you scream.

Most kids would think we were freaks to be so wrapped up in gruesome make-believe. It would take hours of me lying in bed at night before the jitters would stop and I could fall asleep. They weren’t for nothing, though. Our stories weren’t senseless like the video games where you run around shooting people, stealing cars, and pistol-whipping prostitutes. Good beat evil. I, a girl, was the hero.

Ben stopped telling them eventually. That sort of make-believe dries up as you get older. Our games evolved. Ben was in awe of our island initially. He wanted to explore every windswept beach and trail. We spent summers searching for the source of Swisher Spring. We performed high dives between the rocks. When we were old enough, we sailed the Mira without Dad; parentless we sunbathed on her decks and waved and yelled as ferries blasted their horns in the distance. We sailed to uninhabited bits of land and foraged for berries and slept under the stars and got bitten lumpy by mosquitoes and roasted near a million marshmallows. We had adventures and swore on everything that mattered to us—on summer, our favorite time of year—that we’d never have as much fun with anyone else.

Ben got older, and the awkward boy who showed up with the tabby vanished. The kids at school stopped calling him praying mantis. He grew into his limbs. Ben became golden, popular, and opinionated. He had better luck than me. Being a teenager isn’t as hard for boys as it is girls.

For girls there starts to be all this static in middle school: who likes who; who hasn’t had their period; who has boobs; who’s stuffing their bra; who’s going to second base; what is second base; who’s a slut; who dresses like a slut; who’s a prude; who dresses like a prude. It goes on and on. I slouched. I dressed to avoid attention. I kept my eyes and head down. I could jump, hoot, and snarl on the wild adventures with Ben, but as soon as I got to school, I made myself small and unnoticeable. I focused on what was ahead.

The girls in college wouldn’t know that I was excluded from sleepovers because I wore a sports bra that gave me a uni-boob. The boys wouldn’t know me as Ben’s weirdo sister, or half cousin, or foreign exchange student—no one ever bothered to get the step-thing right.

Luckily, Willa wanted out of high school too. We spent the first semester of ninth grade on our plan. We consulted every college preparatory resource, researched college admission stats, pored over Gant High’s course catalog, and plotted out the remaining semesters of high school to maximize our chances of getting into the colleges of our dreams. It was our foolproof map to escape. And then, in a blink of an eye, all that changed. It turned out that I was rushing to a place and time where Ben wasn’t real.