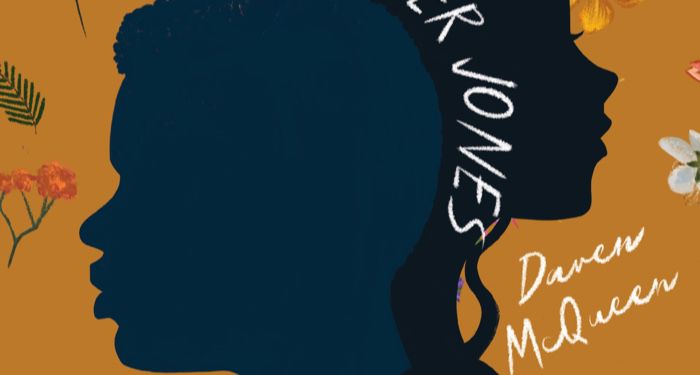 Get ready for one invincible summer. Check out The Invincible Summer of Juniper Jones by Daven McQueen, out June 2020, and read the exclusive excerpt below! 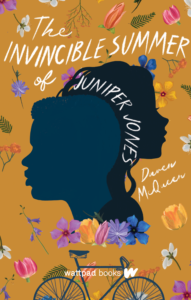 It’s the summer of 1955. For Ethan Harper, a biracial kid raised mostly by his white father, race has always been a distant conversation. When he’s sent to spend the summer with his aunt and uncle in small-town Alabama, his Blackness is suddenly front and center, and no one is shy about making it known he’s not welcome there. Except for Juniper Jones. The town’s resident oddball and free spirit, she’s everything the townspeople aren’t―open, kind, and full of acceptance.

Armed with two bikes and an unlimited supply of root beer floats, Ethan and Juniper set out to find their place in a town that’s bent on rejecting them. As Ethan is confronted for the first time by what it means to be Black in America, Juniper tries to help him see the beauty in even the ugliest reality, and that even the darkest days can give rise to an invincible summer.

Daven McQueen’s Juniper Jones is a character for all ages in this sweet coming of age story set in 1950s Alabama.

It was on the second Thursday of June, a few days since he’d first set foot in Ellison, that Ethan Harper first met Juniper Jones. He was polishing the already spotless countertop, his eyes trained on the glossy pages of last month’s Crimefighters issue, when the bell above the door let out a jingle. It took a moment for his mind, lost in the action, to register the arrival of a customer. By the time he realized that someone had come inside, she was already at the counter and sticking a freckled hand in front of his face.

Ethan looked up quickly, his mouth hanging open and his arm still reaching out to wipe at an invisible smudge. He dropped his rag, cleared his throat, and stared at the girl who was now sitting calmly on the stool across from him, spinning herself in a slow circle. A volcano of bright orange hair erupted from her head and spilled down her back in loose, messy curls. Beneath the harsh malt shop lights, she was luminescent.

She swung back to face him, a wide, crooked-toothed grin splitting the galaxy of freckles on her cheeks. “Hi, there,” she said, extending her hand again. Ethan shook it gently. “My name is Juniper Jones, but you can call me June, Junie, or Starfish. Or Juniper, I guess. Or JJ. But really, I prefer Starfish.”

Her accent was just a quiet hint lingering on the edges of her words, and her sky-blue eyes never once strayed from his face. He fought the urge to take a step back.

“That’s it?” Juniper cried. “No nicknames, no exciting alias?”

“I—my middle name is Charlie?” Ethan shook his head. “Listen, Juniper, it’s nice to meet you. Can I get you some- thing?”

“Juniper again.” She shook her head. “I’ve been trying to convince someone to call me Starfish. It’s catchy, don’t you think? Anyway, Ethan Charlie Harper, I’ll have a root beer float, please.”

“Fifteen cents,” Ethan said, but her coins were already sliding across the counter. As he put them in the register, he felt her watching him.

“You’re new,” she said, slightly frowning as he moved toward the soda fountain. “I don’t think I’ve ever seen you before. And you know, that’s pretty rare in Ellison. I probably know everyone in this whole town. We could walk down the street, and I could tell you, ‘That’s Betty, that’s Stu and Laura, those are the Shaefer twins.’ Guess you’re not from here, huh?”

By the time Juniper finished her speech, Ethan had spent so much energy listening that he could hardly manage a response. He forced himself to nod. “My uncle owns this shop,” he murmured. “I’m here for the summer.”

“Mr. Shay is your uncle? I never would’ve guessed. Y’all just don’t look the same, is all.”

Ethan studied the dark skin of his hands but said nothing.

“Not that I mean anything by that, you know,” Juniper went on. “Some folks here think everyone should stick to their sides, you know, white folks and colored folks, so of course they were real frosted last year when that school in Topeka got all mixed up again, the way it shoulda been in the first place. Anyway, I thought it was ridiculous that they were so rattled because there isn’t a single Negro within twenty miles of this town. And Lord knows if they tried to force that here, half this town would be lined up in front of the school- house to stop it. Whoa, careful there!”

Without realizing it, Ethan had knocked an elbow against Juniper’s root beer float, sending dark soda sloshing over the edge of the glass. His eyes had been fixed on her face, and his heart was hammering. The cold stares of the townspeople resurfaced in his memory. He imagined them all lining up in front of the malt shop during his shift, murmuring about how he didn’t belong, forcing their way inside, and smother- ing him with their furious gazes.

“Shoot, sorry.” Ethan shook his head to clear the image and reached for the rag.

“No worries.” Juniper flashed another smile. “You know, one time when I got a float here—”

Ethan tuned her out as he cleaned up the spill, letting her rattle on uninterrupted. Thoughts of being cornered by the townspeople still lingered in his mind, but Juniper clearly didn’t notice. She only paused her chatting to take sips of her drink.

“So, why are you here in Ellison? Is Mr. Shay your only uncle? Are your parents on vacation? Do you like it here? Are you going to stay for the fall? It’s real beautiful in the fall.”

She watched him with doe-like eyes, grinning expectantly. Ethan sighed. “My dad sent me here for the summer, but I can’t wait to split. No offense, Juniper, or Starfish, or what- ever, but this place is a killjoy.”

Juniper gasped loudly and suddenly, startling Ethan into a stumble. When he righted himself, her hand was slapped across her mouth in disbelief. “Ethan Harper!” she scolded. “Clearly, you have not experienced the wonders Ellison has to offer. It may be small, but it’s a real gem if you dig deep enough.”

“Gonna take a hell of a lot of digging.” He didn’t have the heart to tell her that he’d already figured he’d never find anything to like about this place. Not with the way he felt whenever he stepped outside.

“Then it’s just your lucky day!” Juniper grinned. “I’ve been looking for a summer sidekick for Lord knows how long, and, well, here you are.”

“Yes,” she said. “I want to have the most fantastic summer ever. The summer to end all summers.” She spun slowly in her chair, spreading her hands in front of her face as if conjuring an image in the air. “I want this summer to be—to be invincible. But obviously, you know, I need a little help. Everything is better with a friend. So far I haven’t found anyone fit for the job, but you’re perfect. You got a bike? No? Well, we’ll get you one, you’ll definitely need it. My adventures are not for the weak or the bikeless.”

Ethan blinked, staring in disbelief at Juniper as she calmly sipped her float, and tried to decide whether this girl was actually being serious. Her smile was disarming and genuine, but what if she was just teasing him? What if this was the next level of those whispers on the sidewalk? After all, no one in their right mind would actually ask to be called Starfish.

“How long are you gonna stare at me like that before you say yes?” Juniper asked, tilting her head. “Boy, you really don’t talk much.”

“I—” Ethan attempted a response, but his words turned to sludge on his tongue. The surprise, the confusion—the sudden contact with another person after a week of near silence—it was too much to handle.