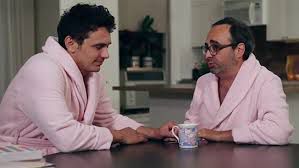 Celebrities have been selling us products basically since both celebrities and products were invented. When you see a Helen-of-Troy-like dame crowned the new easy-breezy-beautiful-CoverGirl, it’s totally okay if you think “Oh, I thought CoverGirl was just drugstore makeup but if RIHANNA WEARS IT MAYBE IT IS ACTUALLY BEAUTY MAGIC FOR YOUR LIPS AND EYELIDS.”

Look, there is no way I would have purchased Aveeno body lotion had it not been for Jennifer Aniston’s personable, down to Earth, completely effective Hulu ads. Celebrities just seem BETTER than ordinary mortals. They’re usually prettier, they’re almost always richer, all their friends are also celebrities. I don’t really have the numbers to crunch to see if they’re more thoughtful and generous and civic-minded and empathetic and resilient than ordinary mortals, but prettier, richer, more famous friends, they’re better ENOUGH than us. There’s just something magical about fame. This is why I always flip through US Weekly in the supermarket checkout line (but then at the last second I don’t buy the magazine because I get this Very Disappointed Look from my husband because “Who Wore it Better?” is Not Great Art).

So it really doesn’t surprise me at all that authors who have any chips to play in the Fame Game are now cashing in what chips they have to promote their upcoming books. Celebrities have ALWAYS been involved in the publishing industry, you can’t have a ghostwritten memoir without a famous person who was too lazy to tell their own story and doesn’t entirely understand grammar to front it! But now celebrities are getting involved in a more recent addendum to publishing, that darling little marketing tool that some people call “Book Trailers” and other people call “Movie Trailers but More Boring.”

Here are two examples of the burgeoning trend. Below, the trailer for Gary Shteyngart’s supposedly awesome memoir Little Failure (‘supposedly’ because my dad said it was good and I believe my dad) and below that B.J. Novak’s supposedly awesome One More Thing: Stories and Other Stories (‘supposedly’ because Michiko Kakutani said it was good, and I believe her, not as much as my dad, but still, enough).

The trailers have more in common with each other than just their visual-equivalent-of-name-dropping (in Shteyngart’s trailer, Rashida Jones is a marketing exec, James Franco, his husband, and Jonathan Franzen, his therapist, in Novak’s, the author [thanks to The Office and a Quentin Tarantino film, something of a celebrity himself] attempts to woo America’s Best Friend Mindy Kaling in a tongue-in-black-and-white-cheek take on French New Wave). They’re also about the authors, Shteyngart and Novak, mocking themselves (Shteyngart is a little failure and everyone knows it, Novak is pretentious) WHILE hanging out with name brand people. It’s like humble-bragging without ever having to reach for your phone to tweet!

In all seriousness, I’m super down for this new wave of celeb-infested book trailers (true, mostly TV actors, true mostly from The Office, but still, faces we recognize and like!) I think both trailers were extremely well done, funny and punchy, I in particular love Novak and Kaling’s pretentious black and white frenemyship, and the trailers do their job: they make me want to read the books they are promoting. I know I should rail against the evils of…something or other here… but I’m down for this new “If you’ve got celebrity friends, flaunt your celebrity friends” school of book trailers. If this keeps up, maybe someday we’ll start calling book trailers “Movie Trailers But More Boring Unless There Are Celebrities and Then It’s a Toss-up.”

What do you guys think of this brave new world of book trailers?