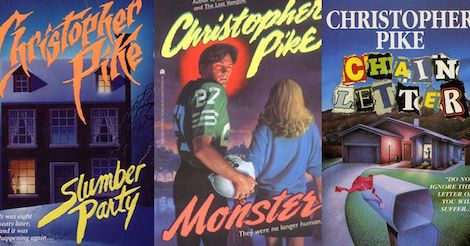 Sponsored by The Lost Man by Jane Harper

For two decades I’d believed on some level that when I stopped being a teen Pike fan, he’d simply ceased to exist. But of course he hadn’t — and with the help of an internet that didn’t exist during the heat of my Pike mania, I tracked down Kevin McFadden, pen name Christopher Pike. After a few emails, questions sent in advance to put the normally reclusive Pike at ease, he agreed to talk, as I struggled not to dissolve into a fangirling mess.

Below are excerpts from the interview and later emails, edited for length and clarity. May it answer your questions too, dear grown-up Pike obsessive, and rekindle your affection for the writer who walked your teen soul through murder, reincarnation, and other adolescent messiness.

This just reminded me that Chain Letter ended friendships in my middle school!

A group of unnamed individuals has donated £25,000 towards an independent publisher’s initiative to publish 20 black British writers in 2020, in the hope it will “normalise” black writing and authors in the UK.

Jacaranda’s campaign, #Twentyin2020, is being run in collaboration with writers’ development agency Words of Colour. Joy Francis, executive director at Words of Colour, called the current moment “an exciting time for independent publishing and black British writers who, for too long, have been under-celebrated and under-promoted”.

The move comes as the UK publishing industry faces the reality of its white monoculture: after the introduction of several diversity initiatives across the big publishing houses in the wake of a scathing report into the industry’s lack of racial diversity among both writers and employees, recent research found that little has changed, with publishers still failing to reflect the UK’s racial and regional diversity.

Maines, a trans activist who in 2014 won a discrimination case that allowed trans students to use bathrooms that fit their gender identity in Maine schools, made her first Supergirl appearance last October. She will officially don the suit and assume the mantle of Dreamer next month—but Sunday’s episode marked the beginning of her trek toward that fated day. As the actress told TVLine, she’s pleased to see Supergirl intertwining Nia’s trans identity with her self-discovery of superpowers; if anything, she’s hoping to tackle more difficult topics in future episodes.

Time to catch up on Supergirl!