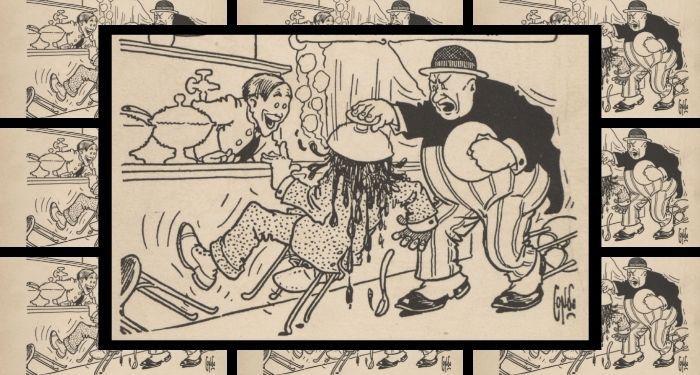 In the early decades of the 20th century, before there were comic books, there were comic strips. And among those strips was The Outbursts of Everett True. Its premise is simple, and each strip has only two panels. In the first, Everett True, a large and perpetually frowning gentleman, is annoyed by someone. In the second, he exacts violent revenge by throwing, yanking, stomping, shaking, punching, or yelling at the object of his annoyance, often as passersby look on in delight.

My introduction to the strip occurred through social media (a common occurrence, apparently). People have posted a surprising number of strips where Everett displays a heartening progressive streak, readily beating the crud out of racists, animal abusers, and negligent parents. This has earned the strip a loyal and appreciative modern fanbase, who enjoy both seeing such an old character behave so nobly (in his own way) and the wish fulfillment of being able to whale on bigots and abusers indiscriminately.

But I, afflicted with chronic stick-in-the-mud syndrome, could not let it go at that. Sure, these cherry-picked strips are fantastic, but is that really all there is to the story? Since Everett True is now in the public domain, it was very easy to find out.

Who Are You, Everett True?

Everett True was created by A.D. Condo and J.W. Raper. The “A.D.” stands for Armundo Dreisbach, which is just amazing. The strip lasted from 1905 to 1927 — a respectable run that even inspired a short silent film in 1916, Everett True Breaks into the Movies. It, too, is now in the public domain and available online. I wasn’t a fan: it mostly portrays Everett as a blundering buffoon terrified of his wife, not a well-defined character with a strong (if skewed) sense of morals.

And that’s really what Everett True is all about. The character’s popularity, then and now, comes from his being so #Relatable. Who hasn’t wanted to give what-for to guys who ogle women in public, or who refuse to wear masks in the middle of a deadly pandemic, or who think it’s just dandy to make fun of people’s weight?

Everett is fearless in a way that people in the real world often can’t be. It doesn’t matter if his opponent is a whole crowd or someone in a position of power, like a police officer. To him, rudeness is rudeness, and he will take down any rude person (or group of people) in any situation without a moment’s pause.

But as I suspected, the strip as a whole is more complicated than this.

The examples I cited above are all seriously disrespectful behaviors with potentially severe consequences for the victims’ mental and physical health. But there are many strips where Everett lashes out for more trivial reasons. One time, he attends a baseball game and throttles a snack vendor for accidentally spilling something on him. Another time, he slugs a man for forgetting an appointment without bothering to ask if everything was all right or if the man had a genuine reason for forgetting. In these cases, Everett is not some proto–Social Justice Warrior; he’s just cranky.

Now what about all those progressive values that have won Everett so many 21st century fans? In the strip below, which has been spread around social media quite a bit, our hero responds to a bigot scoffing at the concept of racial equality by slugging him in the eye. Pure and simple, yet oh so satisfying.

Yet when Black people actually appear in the comic, they are drawn as caricatures and speak in an exaggerated, stereotypical dialect. It’s all very painful by modern standards.

On the other hand, Everett doesn’t treat Black people any better or worse than white people. If they annoy him, they get beat up. I guess that’s one way to argue for race equality!

Another strip I’ve seen shared is one featuring Everett’s wife, who as far as I know doesn’t have a name beyond “Mrs. True.” After Everett sends away some mooching neighbors, the Trues shake hands, showing a mutual commitment to calling out lazy exploiters. But their relationship isn’t always so amicable. Don’t worry, Everett doesn’t hit her (or any woman, from what I’ve seen). Instead, she wallops him, usually for trying to tell her how to run the household. Because domestic abuse is totally fine when a woman does it, right?!

The only one of these strips that I really like is this one: Everett tries to tell her how to cook turkey, so Mrs. True goes off to read and makes him cook it himself.

That’s the problem I have with the entire series, too. Maybe it’s because I read them all at once, or maybe it’s my personality, but watching a guy responding so violently to what are often petty grievances over and over and over again ceases to be cathartic and becomes just plain uncomfortable pretty quick.

The collection I read online was copyrighted in 1907, which is early in Everett True‘s run, and it features almost none of the strips that fans have so eagerly passed around online. Maybe Condo and Raper evolved in their views as time went on, leading to fewer strips with the questionable morals I’ve discussed here. Or maybe they weren’t thinking as deeply about all this as we are and just crafted their strips from whatever issue happened to be irritating them at the time. If they were annoyed about animal abuse that day, they’d do a strip about punishing an animal abuser; if they were annoyed by an animal, they’d have Everett chuck a dog out a window. (Yes, there is a strip with that “punchline.”)

All of this is pure speculation. Regardless of their motivations, there is still much to love about The Outbursts of Everett True. There are plenty of strips where his volcanic temper is justified, and it’s interesting to see the types of issues and concerns people had back then that worked their way into the strip. Some are unfortunately timeless, while others seem old-fashioned or even quaint. (That ogler I mentioned earlier? He was staring at a woman’s ankle. Funny now, serious business then!)

Also, it’s nice to see a comic with a fat person who is supposed to be our hero and who (almost) always comes out on top, even if he is nasty about it. That was as rare then as it is now: at the same time as Everett True was published, there was another newspaper strip called Nobody Loves a Fat Man, which is indescribably awful.

So the next time you see Everett True floating around your timeline, enjoy him. My intention with this article wasn’t to ruin the strip; on the contrary, the knowledge that, over a century ago, there were two flawed men working to imagine a better world through a curmudgeonly comic strip character makes The Outbursts of Everett True worth remembering, warts and all.

And watching Everett put a few anti-maskers in their place ain’t bad, either.