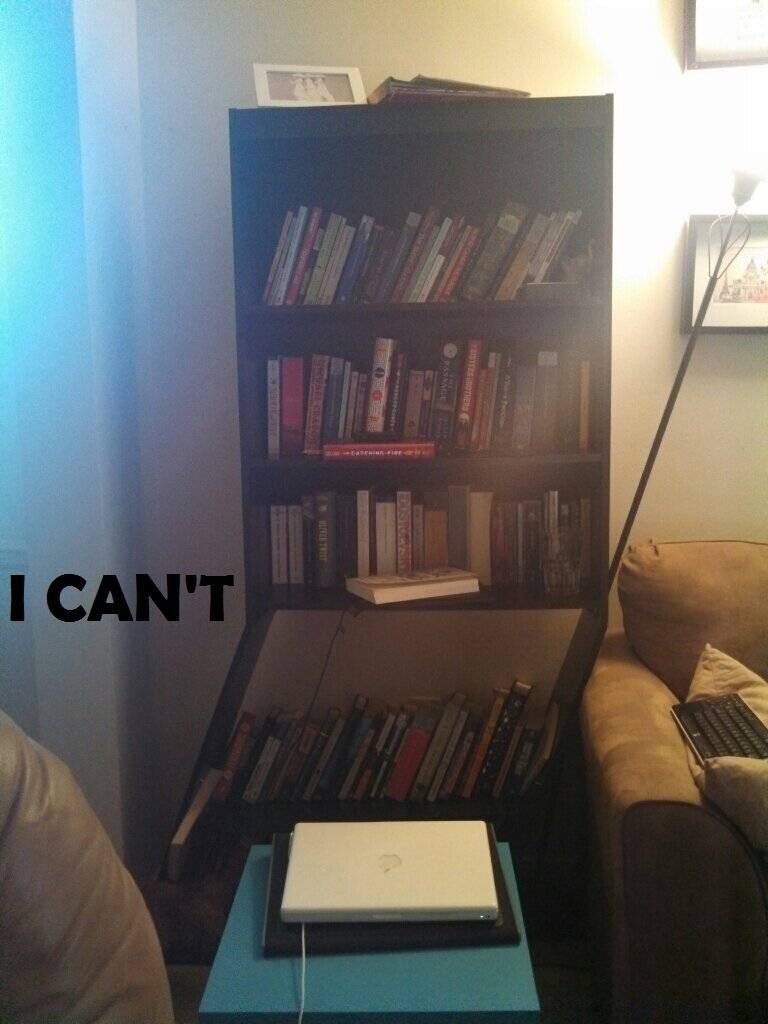 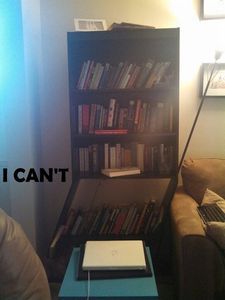 * Our relationship started well, bookshelf. I was a wide-eyed book lover in the throws of a binge, you were a $35 five-shelf solution to a problem. You didn’t match my furniture, you didn’t even match the color on the box- but you worked. And that’s all I needed.

Over our roughly twelve months together, I abused you, I’m sure. Took advantage. Strained your particleboard defenses with my preference for thrift-store hardbacks and tomes stacked two-deep in your holds. An egalitarian, I treated you like your real-wood brothers. Discrimination is wrong, I said. Treat it with respect, I said.

You held up gallantly until your bottom backer board decided it could no longer hold up under the weight (even though it was really just supporting Hemingway, whose words couldn’t have weighed that much- but whatever, it’s in the past). I threw the offending backer board away. After all, now I could reach the plug in the wall behind you.

But the backer board incident opened my eyes to your fragility. You were a delicate flower, cheap Target bookshelf. A virginal Victorian milkmaid among the hardier and more resilient scullery maids that were your bookshelf brethren. I stopped stacking books two-deep in your shelves, I removed the heavier bookends that adorned you. But it wasn’t enough. It was never enough.

Near the end, I noticed that you were leaning. I won’t lie. I even scooted the couch a little closer to you for support, thinking that all you needed was a little attention, something to lean on, in order to go on. You were only a year old, but that’s like 200 in cheap bookshelf years- or even 300, when you add abuse from twin toddlers. When you finally gave way, with a funereal groan and a rasping snap, I was not surprised. Even though I had treated you with all the respect and appreciation I could muster from my cold heart.

Rest in peace, cheap ass Target bookshelf. May your burden be light in bookshelf heaven. Like, maybe just a little Precious Moments doll or something.