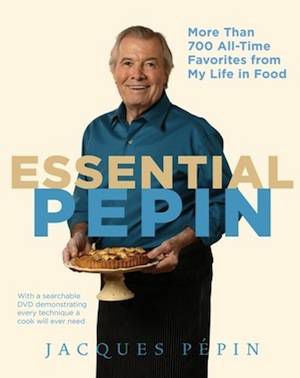 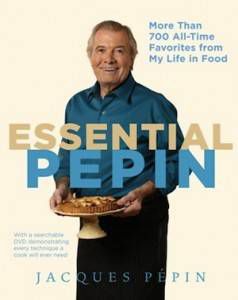 French Chef Jacques Pepin embodies the American idea of a Frenchman: he’s opinionated, precise (might one say “fussy?”), continental. He has an outrageous accent; his cooking show is one of the many reasons I love PBS. My kids, 4 and 6, see him and shout, in unison, as I have taught them, “cocquilles St. Jacques!” which is my nickname for Pepin, and also a fine dish of scallops and Gruyere cheese. To grow up to be foodies, as I hope they will, it is important to know both.

To foie gras, Jacques Pepin, a French chef, unapologetically says oui. “The large liver from a force-fed goose or duck is one of the greatest delicacies known to epicureans,” he says in his new French cookbook Essential Pepin.

Despite how he is around geese (clearly fierce), around people,  Jacques Pepin is warm and unfailingly gallant. He is, as my mother used to sing, a “chevalier de la table ronde.” Or, in English, a knight of the round table.

He has panache when he makes ganache. Watch this highlight reel of Pepin cooking with Julia Child, then in her dotage. He is affectionate and deferential, like a knight with his lady, as they trade barbs about the French versus American uses of goose fat. I laughed so hard I cried, and then looked online for places to procure copper bowls. These two are art.

Essential Pepin includes Eggs in Aspic (like I said Pepin has a palate that leans toward his French childhood: aspic and Fresh White Cheese With Cream, but so what? We ‘re not going for the chartless borders of gastronomy, we’re here for the charm, which is considerable. For instance: “There is nothing like a souffle to start a fine meal.” Really? I can think of countless easier ways to start a fine meal, but cherie, you’ll be charmed, as I was, into making one.