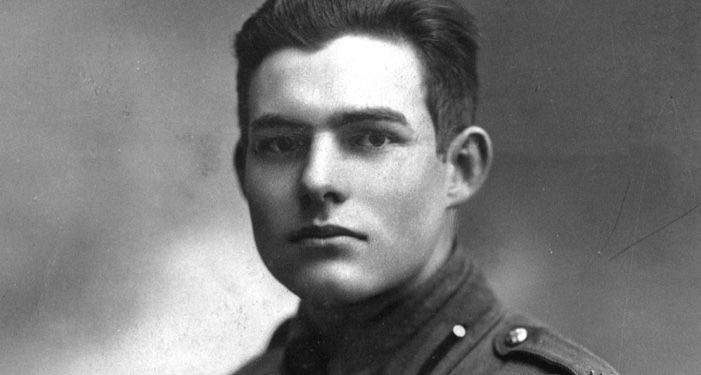 Ernest Hemingway seems like more of a legend than a man. He told tall tales about himself — a more heroic version of his war injury, a more loving reaction to his wife losing a suitcase full of his writings — so much that it blurred the line between fact and fiction. Who was Ernest Hemingway, really? A writer? Of course. A hyper-masculine caricature? Sure. A tortured soul with a long line of mental illness in his family? You betcha.

Many people are firm in their stance on Hemingway: love him or hate him. And I get it! He’s a polarizing dude! He was pretty arrogant, racist, and misogynist, among other things. But he also changed the way readers approached books. He didn’t write difficult stories. He wrote with simple words and declarative sentences. His character-driven stories are for everyday people. Sex and gender are always at play. There are no happy endings.

PBS recently released Hemingway, a three-part documentary about the life of the famed writer, by Ken Burns and Lynn Novick. It’s very long — each episode is about two hours — and left me with a little rain cloud above my head for a few hours after finishing it. It encapsulated most but not all of this man’s life. At Literary Hub, Alex Thomas’s thoughts on the documentary mirror my own: “There is no American writer who has left as much literary criticism and speculation in his wake as Hemingway. But after nearly 100 years, that criticism is finally becoming more honest, nuanced and interesting.” The documentary showcases all the machismo of Hemingway, of course, but also delves into the softer, messier sides of the man, especially in the final installment.

Hemingway’s work came to me at a time when I desperately needed it. I was in the midst of the darkest depression I’d ever experienced, shortly after graduating from college and entering the “real world.” I’d lost the ability to focus on books — books! the one thing keeping me tethered to this plane of existence! — and picked up A Farewell to Arms on a whim. It changed everything. It wasn’t the content of the book; it was the writing. Hemingway got right to the point. I didn’t have to worry about my mind wandering over flowery writing — he laid it all out with short sentences and repetition. I was transfixed. And cured, for the moment.

Of course, I get funny looks when I say Ernest Hemingway’s work brought me out of my depression. The dude was mentally ill, an alcoholic, wrote about death a whole lot, and died by suicide. He was also pretty racist and a horrible misogynist.

But I haven’t been able to shake this adoration I have for this complex man.

I named my cat Ernest. I’ve kept the iconic “Write drunk; edit sober” print from Obvious State above my desk since college (although now that I’m looking into it, it appears he never said that and also he wrote first thing in the morning with a clear head, so why would he say that?) and followed that advice liberally for a time. I’ve received countless Hemingway-themed trinkets over the years, a la many a Book Fetish. My first apartment of adulthood was in the town next-door to Hemingway’s birthplace, and I made a trip to that house and museum each summer of the three years I lived there. When I got my job in publishing, my friends took me to a fancy Hemingway-inspired restaurant where we drank daiquiris and ate very expensive french fries. Loving Hemingway has become my thing.

I have this memory of being in the backseat of my grandma’s car as a kid and hearing something about Hemingway, of Oak Park, on the radio. The long road spanning the 30 miles from Oak Park to my family’s neck of the woods is called Oak Park Avenue, and I was certain that meant he lived nearby. How long could a street be, right? I asked to go find his house, but we never did. It stayed locked in my head, though, that this famous man once lived touchably close to us.

Before she died, my grandma proudly told every nurse that her great-grandkitten’s name was Ernest Hemingway, just like the writer.

The life of Ernest Hemingway sounds like that of one of his gregarious characters. He often wrote about things he experienced, or came close to experiencing, so his work had a way of feeling genuine.

Quick timeline: Hemingway was born in 1899 in Oak Park, Illinois. He was a reporter for The Kansas City Star for a stint before heading to Italy to be an ambulance driver in World War I. In 1918, he was wounded in both legs and sent home. After recovering in Chicago, he packed up to Paris with his first wife, Hadley Richardson, and became buddies with Gertrude Stein, Ezra Pound, James Joyce, and F. Scott Fitzgerald. The Sun Also Rises, his first novel, was written during and about that time of youthful adventure. His time at the war front and later recovery inspired his next novel, A Farewell to Arms, in which an ambulance driver is injured and falls in love with one of his nurses.

With the success of his writing came a lavish lifestyle. He traveled the world, always on the hunt for big, bold experiences. In Spain, he got a taste for bullfighting and wrote his first nonfiction book, Death in the Afternoon, a look at the history and traditions of Spanish bullfighting. In Tanzania, he became obsessed with big game hunting and wrote Green Hills of Africa, about a monthlong safari he took with his second wife, Pauline Pfeiffer.

In 1937, he started covering the Spanish Civil War for the North American Newspaper Alliance. There he met his third wife, Martha Gellhorn, who inspired him to write For Whom the Bell Tolls, his most famous novel, about an American soldier in the Spanish Civil War. Ten years later, he published Across the River and into the Trees, a lackluster novel about a man in love with a much younger woman. Furious at the negative reviews for that book, Hemingway quickly wrote The Old Man and the Sea over the course of eight weeks, which then won him the Pulitzer Prize. That was the last of his books to be published in his lifetime.

In the 1950s and early ’60s, he was in the middle of multiple manuscripts, five of which would be published posthumously. A Moveable Feast, his memoir of life in Paris during the 1920s, was closest to complete before his suicide and was published three years later, in 1964.

All that fame and adventure took a toll on Hemingway. He endured numerous concussions, leading some neurologists today to diagnose him with CTE (chronic traumatic encephalopathy, a degenerative brain disease caused by traumatic head injuries that manifests in memory loss and severe mood swings). Compound the brain injuries with his depression and alcoholism, and it’s a recipe for disaster.

In the years leading up to his death, he was deeply depressed about his writing and exceedingly anxious that he was being watched by the government. He received electroconvulsive therapy (ETC) for the depression, which likely worsened the symptoms of his other neurological ailments.

His granddaughter Mariel Hemingway wrote a memoir, Out Came the Sun, in 2015 about the five generations of mental illness and numerous suicides that run in the Hemingway family.

Until he was 5, Ernest Hemingway and his older sister, Marcelline, were raised as twins. They wore matching outfits in family photos, had identical bowl haircuts, and played with tea sets and toy guns in equal measure. It’s easy to draw the connection between that upbringing and his exuberant showcasing of masculinity for the rest of his life, from hunting and fishing to boxing and bullfighting.

But later in life, he and his fourth wife, Mary Welsh, swapped gender roles from time to time. She cut her hair short (“like a boy’s”) and dyed it platinum, and he dyed his the same. He wrote about the thrills of androgyny and gender fluidity in the posthumously published The Garden of Eden — a marvel to have been written in the early ’60s.

Four isn’t that many when you compare it to, like, Henry VIII, but Hemingway had each new wife lined up before divorcing the prior one. He had one son with his first wife, Hadley, and two more sons with his second wife, Pauline.

He dedicated four of his books to his wives: The Sun Also Rises to Hadley, Death in the Afternoon to Pauline, For Whom the Bell Tolls to Martha, and Across the River and Into the Trees to Mary. His buddy F. Scott Fitzgerald joked that Hemingway wanted a wife for each book he wrote.

Seriously, the dude loved nicknames. Many collections of his letters have been published, so we get to see the depth of this love. He signed his letters Ernie, Hem, Hemingstein, and everyone’s favorite: Papa. His homes and boat also had nicknames, and were referred to by their names, as if they were human.

Ernest Hemingway survived two consecutive plane crashes — yes, you read that right — and got to read early versions of his obituary.

He and Mary were in Africa in 1954, on a sightseeing flight over the Belgian Congo, when their chartered plane struck an inactive utility pole and crash-landed in the brush. Hemingway suffered a head wound, while Mary broke two ribs. The next day, on their way to receive medical care, the plane they boarded exploded at take-off. Hemingway was burned and suffered another concussion.

In Key West, Florida, there’s an annual Hemingway Look-Alike contest. It’s the centerpiece of Hemingway’s birthday celebration in late July, with the contest at Sloppy Joe’s, a bar Hemingway frequented. All the old, white, bearded men swarm to the area in a sea of Hemingways. I love it so much.

Florida isn’t the only place to claim Ernest Hemingway as its own. The cottage his family stayed at when he was a boy in Walloon Lake, Michigan, was declared a historical landmark in 1968. His home in Ketchum, Idaho, earned the designation in 2015. His boyhood home in Oak Park and his Havana home are also museums.

Oh, and I almost forgot! His house in Key West is the home to litters of polydactyl cats, also known as Hemingway cats. They have six toes and roam about the home amid tourists in all their extra-toed glory.

Much has been written about the mythical Ernest Hemingway — far more books than he could ever write in his own life. Mary V. Dearborn wrote a stunning biography, Ernest Hemingway: A Biography, in which she asserts that Ernest was always destined for suicide, just as his father before him. Nicholas E. Reynolds wrote Writer, Sailor, Soldier, Spy, about Hemingway’s secretive adventures in Spain, China, and Cuba and the FBI files that were kept on him. His close friend A.E. Hotchner wrote numerous rose-tinted books about the sweetness of Hemingway: Papa Hemingway: A Personal Memoir, about his daily routines and anecdotes; The Good Life According to Hemingway, about many of Hemingway’s tall tales and adventures; and Hemingway in Love: His Own Story, about the dissolution of his first marriage and other reminiscences he told in his final days.

And certainly, many more books about Hemingway are sure to come.