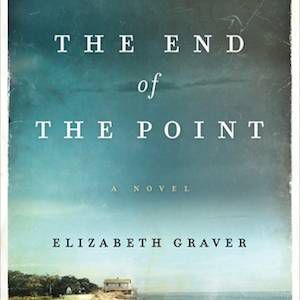 I didn’t expect to find much to relate to in Elizabeth Graver’s novel, The End of the Point. I picked it up because it was long-listed for the National Book Award, and it seemed like the kind of sprawling, multi-generational, deeply-engrossing novel that would find me at a time when I needed richness – when I needed a big juicy steak after so many months of lentils.

And it was all that, to be sure. It tells the story of several generations of the Porter family, a family that owns property on rocky Ashaunt Point, a fictional town on the coast of Massachusetts. It was rich and deep and sprawling. It was gorgeous steak, as I hoped it would be.

But I suppose I didn’t expect to relate to it because my family is so very different from the Porters. They own property, they went to Ivy League schools, they are well-to-do. My family didn’t own a second home, let alone acres of land with several houses built on it, on the rocky shores of New England. I thought, in this book, I would read of people who were so different from me, whose lives were so divergent that I might even roll my eyes a little.

I didn’t roll my eyes. I found in the Porter family so much more to relate to than I could have anticipated. And it wasn’t necessarily because of the family’s circumstances – those were, to be sure, quite different from my own. But rather, I related to family, to failure and disillusionment. These themes are universal and well-chosen. Most of all, though, I related to place.

The End of the Point is one of those books that communicates a certain ownership over place. It takes you back to that feeling of a place belonging to you. For me, this was Provincetown, Massachusetts. I spent a summer interning at an artist residency in Provincetown, the little town on the tip of Cape Cod. Because I lived there for a summer, I was a townie, albeit a temporary one. I watched families come and go, and watched the changing patterns of gay sub-groups as they poured into town for various themed weeks throughout the summer:  Bear Week, Girl Splash, Women of Color.

Between work shifts, I walked Commercial Street, stopping for a drink or a slice of pizza or a cup of ice cream. I silently cursed dawdling tourists blocking my path. When we lost power for most of a day in late summer, I tried to reassure visitors to our residency center, but with little success:  it was hot, uncomfortable, and they were unhappy. But later that night, as a friend and I saw the lights come on along our street, one house at a time, we suddenly heard cheers from the two miles of town that surrounded us:  the whole lot of us rose our voices up in celebration. And I could hear them all.

I went night swimming only once, wading into the ocean, only to see tiny jellyfish all around me, lighting up as my arms brushed past them. My roommates and I twirled in the water, a cyclone of light and limbs and water.

There have been many places in my life that have felt like mine – homes, schools – but Graver’s novel is about a home away from home, a place away, a substitute location. And that’s what Provincetown was for me. That’s what Ashaunt was for the Porter family. Graver’s book is one of those books that takes you there – it took me there, back to hot, sticky Provincetown, to my too-short hair, my cups of ice cream, my discovering kale and working too many hours, to riding down Commercial Street in the early morning, before anyone else was out, under banners of rainbow flags hung overhead.

Graver’s book included none of that – no kale, no rainbow flags, no modern summer life. But the feel of it – its coastal solitude, the ownership, the resistance to change, the small town feel – all of that rolled up into a book that was so truly transportive that I was there, in Ashaunt, yes, but I was also in my own memory, to my own version of Ashaunt. Provincetown was a substitute place, one that can’t be recreated elsewhere. Except it was, in a way, in Elizabeth Graver’s The End of the Point, which was a magic trick I had not expected when I opened to the first page and began.