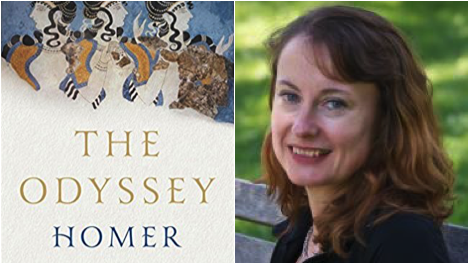 Growing up, I learned about Greek myths and plays before I’d even started school—how could I not, with a mother who loved the Greek epic poems and myths? The Odyssey was my first experience of Homeric poetry, and it’s remained a favourite story throughout the years, through various adaptations and translations. But while I’d read fiction by women that had jumped off from the original text of the poem, I had never read a translation of that text by a woman before. There was none to read. 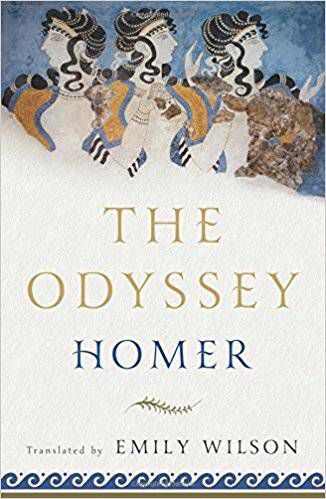 Enter Emily Wilson, the British classicist whose translation of The Odyssey (published on November 7) not only modernizes the text into a invitation to every reader, but also marks her as the first woman to completely translate the poem into English. I spoke with Wilson about the project and her own history as a translator, and her enthusiasm and passion for the work and the story is clear in every answer.

What was the first translated text that drew you in, when you were growing up?

Emily Wilson: It’s hard to remember. I know that when I was a kid, pre-adolescence, I really loved all those children’s retellings of myths. That’s a different kind of genre from translated texts, and I didn’t really start reading those until I was a teenager. I know I read Homer in translation as a teenager, I think the first translation I read was the Penguin one, but I don’t remember. I remember having a sense from reading the translation of being excited about the idea of the Homeric gods and the way that the whole complexity of the story—which you don’t really get from the abbreviated kids’ versions—and I think the cruelty of the gods begins to come through once you read translations.

How did reading that work start shaping your interest in translation and what is required of someone who wants to be a translator?

EW: I’m not really sure I thought about translation in that way through reading translations. I think it took me a long time to do that in those terms. Learning other languages—I started learning Latin and Greek in high school and also French—and being aware as a teenager of how very different the structures of language and how you put things together in another language is totally different. It’s a realization that you have to have before you realize what it is to do a translation. If you don’t already know what it would be to know another language very well, you can’t get a glimmering of that. Just reading translations didn’t in itself get me to that realization but learning other languages did.

In a recent interview, you spoke of wanting to “spend a little bit longer with Euripides” during your time at Yale. What was it about those particular early Greek dramatists that kept you coming back to their work?

EW: A combination of literary aesthetic attachment—that I loved the different literary styles, poetic styles of Sophocles and Shakespeare and various authors I’m in love with in an artistic literary way. But also the sense that Greek tragedy seems to be so obviously engaged with issues of life and death and issues of the individual and the community, and these central, core issues that come up with any human life. How am I going to fit into society? How am I going to deal with the fact that I’m going to die? I love that Greek tragedy is absolutely engaged with these questions.

You’ve spoken quite often about the word “polytropos” and the challenges and questions that it posed to you, and to many translators of The Odyssey. What were some other instances that were similar to this while translating the text?

EW: What I was trying to achieve in this translation is narrative pace. So if one is arguing about a particular word, then I’ve kind of lost you. I wanted to be able to do a close reading, but I also don’t want it to be every single word, we’re going to stop.

“Polytropos” is one epithet, and what I did with the epithets was to repeat it over and over and over, and I tend to do different things with them every time, ’cause it’s a marker of the fact that we don’t live in an oral culture. The ways we describe something are very different when you’re reading a text. When Odysseus is telling his own story of his wanderings and how he dealt with the Cyclops and the sirens, he’s referred to as polymetis. We always have a choice of what element we can emphasize in an epithet, so I called him “Odysseus, the Lord of Lies.” I wanted to clue readers in on the possibility that this is not going to be naturalistic, that it’s a tall traveler’s tale.

It hearkens back to the first bit of Book 1, where the poet asks the muse to “find the beginning.” We ask: where is the beginning?

EW: In that line, I used “modern times” for the Greek kai hemin “also for us.” So what does “also” mean, and who are “us?” I spent a huge amount of time grappling with how to deal with that. Because I could have just said “also for us,” but that doesn’t evoke anything particular. I wanted it to be clear that this—the conjunction kai, or “and” [denotes it]—has been something that has been told over and over again, but we, whoever we are, are going to get it. There have been other times this poem has been told, and now again for us, here is this time.

It’s an invitation to both the muse and the reader.

Something that has always drawn me and many other readers to The Odyssey is seeing characters like Penelope and Circe. You’ve talked about how when we laud figures like Penelope in past translations, there has been a tendency to dismiss women who are not in positions of power or who are of a different class. How did you approach translating the scenes that involve the female characters who serve Penelope?

EW: I think the narrative voice of The Odyssey is far more flexible and the vocalization of the narrative has much more richness than is usually brought out in translation. It’s going to be told from one particular point of view and you’re going to be told what to think about it. I wanted the reader to be aware that the [women in Penelope’s household] weren’t servants, they weren’t free. To use the word “servant” or “maid” suggests otherwise.

In that terrible passage with the hanging of the women, I wanted to make sure that I wasn’t doing what I think a lot of translations do, which is to invite the reader to gloat at something horrifying. I wanted to do whatever I could to bring out the way I think the original text handles it. [The original text] allows you to see the perspective of the people who are being killed. I’ve talked about the words “sluts and whores” [in past translations]. There weren’t any abusive words in the original poem. Telemachus explains the “reason” he wants to hang these women. He doesn’t actually in that moment call them anything. He describes them as women who spend the night with Penelope’s suitors. I wanted to make clear in the language of the simile that these women are fully human. This is bringing out the horror of what happened to these women. It gives them back some dignity and the reader should be able to feel whatever they feel in that moment.

What has translating this particular poem taught you as someone who has loved the classics for a very long time?

EW: It’s taught me not just as a reader, but also as a writer. I’ve learned a huge amount from this project about how to write, and writing this many lines of iambic pentameter—how do I create the emotional depth, the verbal play, and the clarity? How do I find the kind of voice that I wanted? I wanted it to be both clear and magical. Just learning how to do that, I learned a lot about both Homeric Greek and English.

There’s a groundedness and a richness to Homeric characters that I don’t think I fully appreciated before. For instance, Telemachus is characterized as so deeply immature and his teenage hostility towards his mother is dealt with in a way that’s fully human. There’s quite a lot of humour in this poem as well. Even though [the poem] is all this regular rhythm, it can be so different, and it can touch on so many different relationships.