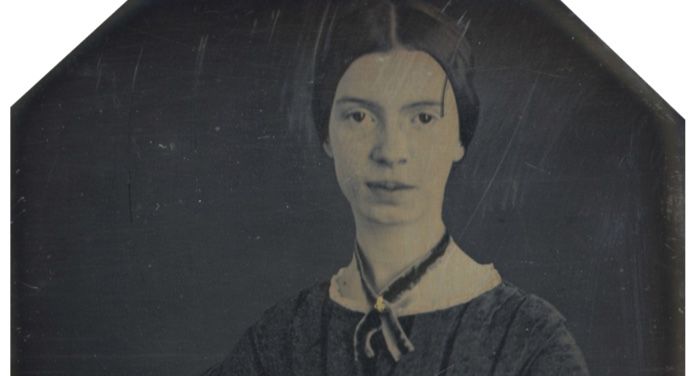 When I first learned about Emily Dickinson in school, they essentially told us she was very popular and beloved but we had next to no information about her. Most of the information we have about her comes from correspondence because she is thought to have lived most of her life in isolation. Whether she did or not, we have a fair amount of information about her family and early life, and much less about her later life. This could be why Emily Dickinson media is having a bit of a moment right now. From the Apple TV+ show Dickinson to the 2018 film Wild Nights with Emily, it’s clear there is an interest in exploring the beloved poet’s motivations and inspirations.

Even though her poems are now embraced and taught in poetry classes of all ages, there was little interest in publishing her poetry in her lifetime. It was often recommended that she “fix” the poems in order to make them rhyme, and also give them titles. Emily had little say in what happened to her poems after her death, and for years Emily Dickinson scholars have told us all about the alterations that erased major parts of Emily’s life.

How We Teach Emily Dickinson

Emily Dickinson’s poetry has truly stood the test of time and is still taught to students every year. The Emily Dickinson museum has a series of teacher reflections on her poetry and how it works for kids.

For younger children, the poems helped them connect to interesting things they were learning about plants. The short poems are accessible to kids. In upper grades, teachers talked about how they got their students to read biographical articles about Emily and annotate her poems. This kind of textual analysis meant they could connect to Emily even further and understand how your life can affect your creative output.

Emily’s life as a recluse was what I learned about in school, but it’s possible things are very different these days. Ever since Emily’s death, there has been a struggle to define exactly who she was. It’s important to understand why the “recluse” narrative might have been put forward to hide some other parts of Emily’s life.

Emily Dickinson was born on December 10, 1830, at her family’s homestead in Amherst, Massachusetts. Her family on her father’s side had come to New England during the Puritan Great Migration of the 1600s, when English Protestants sought to flee what they believed were excesses of the Church of England. Her grandfather, Samuel Dickinson, helped found Amherst College. In 1813, he built the famous family house, the Homestead, where Emily spent much of her life. Emily’s family was incredibly intertwined in the development of New England. She’s a huge part of Massachusetts history.

Emily went to Amherst Academy (now Amherst College) for seven years and then Mount Holyoke Female Seminary (now Mount Holyoke College) for one year. She grew to love poetry when she was very young because of a gift from a family friend — a Ralph Waldo Emerson poetry book.

As opposed to the recluse narrative, Emily was a pretty lively and social person, going by her many correspondence partners. The Morgan Library & Museum in New York City put together an ambitious exhibition of Emily’s poems that showed this side of her.  This gives a little more grounding to the many party scenes on the Dickinson television show — it definitely captured the spirit of Emily that has long been ignored.

Emily Dickinson’s secret loves have actually been discovered and “revealed” multiple times in century since her death. Emily’s niece, Martha Dickinson Bianchi, wrote about Emily’s relationship with her mother Susan (married to Emily’s brother Austin, so Susan was Emily’s sister-in-law). Their relationship is enshrined in letters where they discussed both of their writing and scholarly ambitions.

Susan Gilbert and Emily Dickinson met when they were barely out of adolescence and became lifelong lovers and friends. Emily wrote Susan letters constantly declaring her love through poetic devices that scholars chose to ignore when it suited them to do so. However, it makes perfect sense that she would use poetic and literary metaphor to explain the depth of her affection for Susan as opposed to writing something explicit like, “I am a declared lesbian for Susan Gilbert in an explicit fashion, future scholars take note.” Comparing her love for Susan to Dante’s for Beatrice should have been enough.

Susan wrote poetry as well, and often published pieces in the Springfield Republican. She had a strong vision for how she would have edited and compiled Emily’s work after Emily’s death, and said she would have included more of Emily’s prose.

In addition to Susan, Emily likely had an affair with the poet Kate Scott Turner. The one photo of Emily in her lifetime was a daguerrotype of Emily Dickinson and Kate Scott Turner. This daguerreotype of them together had long inspired questions, but the writer Rebecca Patterson attempted to understand them in her 1951 book The Riddle of Emily Dickinson. Patterson argues they were in love and the relationship had a lasting impact on their lives and work.

The recluse narrative about Emily could still be partially true, in a sense. She was an unmarried woman in the 1800s, so it’s unlikely she would have gone out and traveled alone all the time — that was more of a Nellie Bly thing. She was also a member of a deeply important, respected family in New England, so that could have been the reason she wasn’t a libertine. It is also clear from her poetry that she had a fascination with death. However, she was also a lifelong gardener, so she did have to go to the garden in front of the Homestead to indulge in that hobby.

It is, however, important to question why the recluse narrative gained such a stronghold in the public perception of Emily. If a young fan of her poetry was already fed the recluse narrative, and then discovered her love life, they might equate being a lesbian with a sad, lonely life.

The recluse narrative of Emily Dickinson also serves a narrative that, in order to be a successful artist, you need to cut yourself off from society and relationships. This was not true for Emily

A major reason we know so little about Emily Dickinson (compared to other towering figures in American literature) is that so much of her work was published after her death. Although now she is recognized as a towering figure of American poetry, she only published ten poems and one letter in her lifetime. However, scholars believe she did not authorize the publication of these poems, and the poems were edited to fit the syntactical regulations of the time. Even after her death, Emily was a huge innovator in form and syntax. In fact, it was only after her death that she could inspire other poets with her innovation — because she was not given the opportunity during her life.

After Emily’s death from a heart attack in 1886, her younger sister Lavinia discovered Emily’s packets of poems around her house. The first collection of her poetry was published in 1890, though heavily edited by Emily’s acquaintances Thomas Wentworth Higgins and Mabel Loomis Todd. Their actions of erasure are depicted in the film Wild Nights with Emily, a film based on the relationship between Emily and Susan and the discovery that so much of Emily’s poetry had been altered. In a New York Times article published in 1998, Martha Nell Smith and Ellen Louise Hart put forth their argument that many of Emily’s poems had been altered to remove Susan from Emily’s history. They outline their argument more fully, with many explications of Emily’s poems about Susan, in their book Rowing in Eden: Rereading Emily Dickinson.

Smith and Hart point the finger at Mabel Loomis for the major deletions of Susan from Emily’s letters and poetry. Loomis had an affair with Austin (Susan’s husband), which was how she met Emily — her actions are part of the framing device of Wild Nights with Emily. She may have wanted to protect Austin or Susan or Emily from prejudice, or she may have simply wanted to protect the family name. She might have thought that the poems would never find an audience if the deep love between Susan and Emily was laid bare. However, more than 130 years after her interference, the poems still find an audience every day.

We’ll probably never have a ton of information about how Emily Dickinson spent her days. Since she wasn’t famous in her lifetime, there wasn’t a ton of interest in cataloguing and mythologizing her. This is a crucial process when writers’ work finds success while they’re still able to contribute to the public vision of who they are.

Since the majority of her poems were published posthumously, Emily did not have a chance to reflect on her reputation or legacy during her lifetime. It may seem facile, but famous writers do indulge in their own myth-making, if they’re lucky enough to gain fame while they’re alive. Even if Emily had had no interest in her own myth-making, it would have colored her reputation differently had she been a famous poet while she was alive and reporters were knocking on her door to interview her.

It is also important to recognize Emily’s love life and passion as a part of her poetry. Her love for Susan, her affair with Kate, her many correspondence partners — these were all a part of her creative process. Dickinson and Wild Nights with Emily are both recent corrections to the narrative that Emily never connected with anyone. They are both fictional takes on her life, but the point is that they wanted to present the spirit of Emily more fully than we had seen before. It’s just as likely that Emily went out and partied with her friends as the idea that she was a lifelong recluse — this is why viewers and Emily Dickinson experts are connecting with the version of Emily Dickinson portrayed in the gleefully anachronistic Dickinson. The livelier, more passionate picture of Emily Dickinson that we’ve been getting from scholars and adaptions feels like it could be more poetically inspiring.

Writers and their lives are fascinating to read about, especially those who were seen as scandalous for representing marginalized people, like Oscar Wilde and James Baldwin. Getting a fuller picture of Emily Dickinson and her relationships can enhance your experience of reading her passionate, form-breaking poetry.