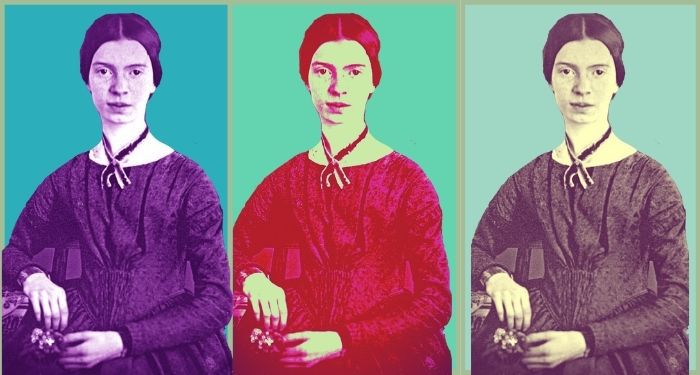 In 1862, Emily Dickinson wrote a letter to Mary Bowles, whose husband was away from home. She wrote: “When the Best is gone — I know that other things are not of consequence — the heart wants what it wants — or else it does not care.” That phrase (emphasis is mine) has entered the pop culture lexicon to such a degree that I did not realize it was originally penned by Dickinson until I discovered that Selena Gomez’s 2014 song by the same title (about her on-again, off-again boyfriend at the time, Justin Bieber) was connected to the poet.

(The phrasing was unfortunately and famously also used by Woody Allen in a 2001 interview with Time about his choice to date — and later marry — his ex-wife’s adopted daughter whom he raised. I would prefer to leave that out entirely, but it remains a well-known phrase in part because of him.)

Gomez is far from the only songwriter to incorporate Emily Dickinson’s words in a song. While many believe that Simon & Garfunkel’s “For Emily, Wherever I May Find Her” is about Dickinson, Art Garfunkel once introduced the song by saying, “This is a song about a girl who is fictitious. Her name is Emily. Neither of us know her but the song is written about her. I’m sure she will appear someday.” However, their 1966 song “The Dangling Conversation” references her directly:

“The Dangling Conversation” by Simon & Garfunkel, lyrics by Paul Simon

Much more recently, hard rock Americana band Clutch wrote a song called “Emily Dickinson” that appears to be directly about the poet:

Aaron Copland wrote a 12-song cycle called “12 Poems of Emily Dickinson” in which he scored 12 of her poems including “I Felt A Funeral in My Brain” and “Nature, the Gentlest Mother.”

A Dickinson phrase that shows up again and again in pop culture is “hope is the thing with feathers,” from her poem of the same title/first line (she did not give her poems separate titles). There is a band called The Thing With Feathers. Another band, Every Time I Die, has a song called “Thing With Feathers.” Yet another band, Trailer Bride, named their final album — and its title track — Hope is A Thing With Feathers. Composer Susan LaBarre wrote a choral orchestration using Dickinson’s poem as lyrics.

But pop, hard rock, and however you’d categorize Simon & Garfunkel’s music are not the only places you can find tributes to Emily Dickinson. In books, Max Porter wrote a hybrid novella/essay called Grief is the Thing With Feathers, while Noah K. Strycker’s guide to actual birds is titled The Thing With Feathers: the Surprising Lives of Birds and What They Reveal About Being Human (it’s a mouthful, but it’s also on my TBR now). And in short fiction, consider Marissa Lingen’s “The Thing, With Feathers” in Uncanny Magazine.

The 2015 novel And We Stay by Jenny Hubbard — a Printz Award finalist — is set in 1995 and features the ghost of Emily Dickinson when a girl, also named Emily, goes to school in Amherst after her boyfriend threatens her and later dies by suicide. With the help of Emily (Dickinson), Emily begins to heal. Not only does the book feature Dickinson, but it features the other Emily’s poetry, which she uses to work through her trauma.

In “Phoebe Cheats,” a 1997 episode of Hey Arnold, Phoebe copies a poem and wins a poetry contest with it; she is haunted by her cheating and the statuette of Emily Dickinson that was her prize. But that isn’t the first time a television character plagiarized a poem: in the 1980 The Facts of Life episode “Emily Dickinson,” Blair passed off a Dickinson poem as her own for a school assignment and was caught when her teacher submitted it to a competition.

There has been a semi-recent spate of Emily Dickinson biopics, some of them more…historically accurate than others. A Quiet Passion came out in 2016, directed by Terence Davies and starring Cynthia Nixon. It leaned hard into the common portrayal of Dickinson as a sad, reclusive figure, and it showed her as decidedly heterosexual, making up a romantic entanglement with a married priest. Um, excuse me but what the hell? 2018’s Wild Nights With Emily, directed by Madeleine Olnek and starring Molly Shannon, went all the way in the other direction and was super gay. And the 2019 Apple TV+ series Dickinson uses modern language and concepts to show what Emily Dickinson might have really been like in her time, through a lens modern audiences can understand and relate to.

This video covers Dickinson’s queerness and the two movies; it was made before the series premiered. She discusses at length the question of historical accuracy, which was difficult until scholars were able to examine her letters and found that they had been heavily edited by Mabel Loomis Todd, who was her brother Austin’s mistress and did not wish to publicize Emily’s relationship with Austin’s wife Susan Gilbert. And unfortunately, that examination began in the 1950s, when the information was largely unwelcome. Rebecca Patterson’s book The Riddle of Emily Dickinson, a dual biography of Dickinson and Kate Turner, was published in 1952, but people are surprised to this day to learn that Emily was probably queer (unlike most modern work on Dickinson’s queerness, the book focuses on her relationship with Turner, not Gilbert).

It feels in many ways as though pop culture references to Emily Dickinson are just getting started. Since so many of the existing ones have been so very white (although it is worth noting that Hailee Steinfeld, who plays her on Dickinson, is a woman of color!), I look forward to finding out where her poetry will go next.