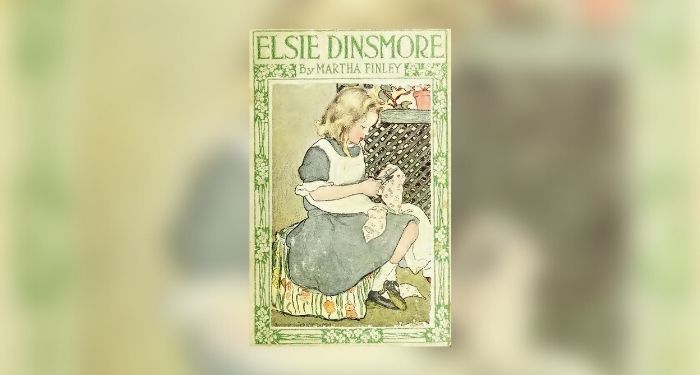 Elsie Dinsmore. What a name. It sounds like an exaggerated satirical cartoon character. Well, that’s not far off. Elsie Dinsmore is the protagonist of Martha Finley’s children’s book series, originally published between 1867 and 1905. The 28 books were instant best sellers, but quickly became known for how ridiculous and idealistic they were. Elsie was even parodied in a short story by O. Henry, “Elsie in New York.” Finley wrote the Elsie books as a guide for girls on how to be the ideal Christian daughter. This is not a critique of Christian literature, but rather of the disturbing content within the Elsie books, including abuse, racism, grooming, and ableism.

In 1999, now defunct Vision Forum published an adapted Elsie series and republished the originals. Elsie became hugely popular within Evangelical and Fundamental Christian circles, prompting a doll line, activity books, and Bible study curriculums. The Elsie books are still being handed to young girls as recreational literature.  I was given a set as a child, but thankfully I found Elsie too insufferable to continue the series. For a quick refresher on the plot, I listened to Kitchen Table Cult Podcast’s episode on Elsie Dinsmore. The episode goes into further detail about how reading and absorbing harmful literature like Elsie at a young age can be damaging.

When Elsie is first introduced as a 7-year-old, she lives with her grandparents on a plantation in the Antebellum South. Giant red flag, flapping in the breeze. Elsie is a spoiled little rich girl. Elsie is presented as the pinnacle of piety, with a faultless moral compass. Elsie’s religious obsession is worrisome for someone so young. She is terrified of making mistakes, of upsetting anyone, and is frequently harshly over-punished. Elsie is constantly anxious about doing what her family wants and what she’s supposed to do.

Despite Elsie’s Christian obsession, the books are staunchly anti-Catholic. It’s important to note that Finley was the daughter of a strict Presbyterian minister.  When Elsie is sent to a Catholic boarding school, it’s for punishment. Elsie has nightmares of demonic-looking  nuns. Catholic traditions are described as inaccurately as possible, to the point of calling Catholicism a superstition. Only good Southern Presbyterians here, folks. (I can make that joke, I attended a Southern Presbyterian university.) Elsie fairs so poorly at the school, the “Catholic scare” as her aunt refers to it, that Elsie becomes deathly ill. Luckily for Elsie, her memory of the boarding school is gone as quickly as her fever.

Elsie’s two main personality traits are perfect and weeping. When she isn’t being perfect to the point of being robotic, she is crying. Crying, crying, crying, about feeling guilty, or because someone else wasn’t as perfect as she is. Elsie is quick to obey authority figures, which isn’t necessarily a negative , but she does so without any defiance or personality. For those who grew up in the Evangelical church, you may remember the adage of having “immediate and cheerful” obedience. That’s Elsie, because even walking too slow while doing as you’re told is sinful.  Even as Elsie grows up in the series, marries, and raises her own children, she still remains a meek, childlike character with no desire for responsibility.

At the hands of her step-grandmother, Elsie is abused emotionally and physically. Elsie’s father Horace returns from his travels and takes Elsie home with him. Horace is a confounding character. Half villain, half hero, Horace is the absent father who returned for his darling daughter. He’s wicked because he’s not a real Christian like the rest of the family. Wickedness and goodness are depicted as simply being a Christian or not. Morality, it seems, as nothing to do with actual actions, in Elsie’s world.

Elsie worships him, despite Horace’s strict disciplinary style. Horace puts the little girl on a diet of bread and water, as punishment. At one point, jealous Horace forbids Elsie from speaking with anyone, including writing and receiving letters. Horace does not respect his daughter’s religion, forcing her to play piano for his dinner guests. Elsie is so distraught that she has a nervous breakdown. In a famous scene that was later removed, Horace drags Elsie and beats her with a whip as punishment. In the adapted version, Horace is edited down and made to seem like a comical overprotective father, rather than the tyrant seen in the originals.

There is another factor to Elsie and Horace’s relationship. They embrace, cuddle, and kiss full on the mouth like a romantic couple. Elsie is described with sensual language, even from a young age. Horace’s friend Edward is blatantly in love with the 8-year-old Elsie. He voices that he wishes she were ten years older. Yes, Edward does eventually marry the adult Elsie. Still creepy as hell.

Before she can marry the man more than twice her age, Elsie must first have her fair share of suitors. Herbert Carrington is one of Elsie’s friends. He walks with crutches and is in poor health, but well-liked. The young Herbert proposes to Elsie, but she turns him down, telling him she’d rather stay friends. That’s a perfectly good answer. Then Herbert dies of a broken heart and everyone forgets about him. Thanks, Finley for that.

Then there’s the racism. It’s clear from the first book that Elsie and her wealthy family live on plantations and own slaves. They own between 200 and 300 slaves, whom they refer to as “servants.” Elsie is close to her nanny, whom she calls “Aunt Chloe,” but doesn’t offer Chloe any protection or payment, because Chloe is “happy” as she is. Chloe is the very picture of a Black Mammy stereotype. Chloe claims that Jesus loves her just the same as if she were white (!). All of the Black characters speak in broken pidgin English and are presented as slow, childlike, and peaceful. They are happy to work on the plantation, and after the Civil War, to take low wages.  Only their dialogue was updated for the republication. When Elsie and Edward are married, they have their own plantation. They justify owning slaves by being kind and proselytizing to them, hoping that Jesus will make them white in Heaven. I don’t even know what to say to that.

During the Civil War, Elsie and family escape to Europe. How fun! A vacation! No worries! When they return home, there is an interaction with the KKK, but Elsie and Edward avoid the KKK. Why? Not because they disapprove of the KKK’s views, but because the KKK is violent. Violence is the big no-no, not the horrific acts of racism associated with them. The racism presented in the Elsie books is not merely a product of the time. It’s the same ugly racism that calls for the banning of teaching critical race theory in classrooms.

As Eudora Welty wrote in One Writer’s Beginnings,

“Eudora is nine years old and has my permission to read any book she wants from the shelves, children or adult,” Mother said, “With the exception of Elsie Dinsmore,” she added. (Welty, 1973)

When reading classics with kids, discussing the language and historical context can help kids understand difficult concepts. Some classics though, like Elsie, have run out of time. Don’t be an Elsie. For the children still reading Elsie, I hope they can find solace in better role models in classic children’s literature. Jo March of Little Women and Anne Shirley of Anne of Green Gables are two excellent examples.

Want to update your bookshelf? Find some inspiration for classic kid lit replacements , or a few classics that still ring true.