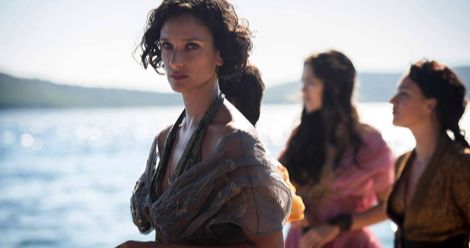 Game of Thrones is like free popcorn. It dehydrates you and makes you crave water or soda. In the end, you feel unsatisfied and yet wanting to nibble on more of it because that salty taste won’t leave you.

Mind, I had a bad experience when introduced to the books from A Song of Ice and Fire, so I can only watch clips at a time of the show. I use spoilers to keep up because seeing entire episodes at a time would be too depressing, and the cliffhangers keep drawing me back despite my distrust. Other people can find joy in the show, but mainly I keep up to satiate my desire for spoilers.  Speaking of which…

Women Who Cause Harm

One of our previous Book Riot contributors talked about how in Game of Thrones, women are seen as sex objects and defined by how men desire them. The exceptions, Arya and Brienne, adopt masculine roles.  There’s another issue with the women in Game of Thrones: revenge motivates most of their actions.

We can argue that the “strongest” characters in Game of Thrones are those that avenge slights to themselves or others; Arya kills to avenge her family and her friends, as an example. Cersei avenges her family, and while it backfires at times, you have to admire her hypocritical resolve. Dany wants to reclaim her throne to pay for a lifetime of pain and assassins sent after her before she turned eighteen.

In contrast, the women who seek to turn the other cheek tend to die. Catelyn Stark, a non-sexualized woman who avoids the revenge route, dies futilely trying to save her son; Selyse hangs herself after she and Stannis sacrifice their only child for a steady victory. Melisandre, who has been exiled for her actions, only seeks to support who she believes is the Red God’s champion. While this drives the point that in this world, you have to right all the wrongs set against you or others will tear you to pieces, it also seems dismal that forgiveness is rarely an option unless the person who hurt you makes amends.

Then we get to Ellaria. And we groan in frustration. Ellaria Sand became a hot button for many people, for good reason. She causes undue conflict out of a desire for revenge and pays a heavy price. Yet we didn’t need that subplot at all; the books don’t have it. And she’s the exception that shows how revenge backfires.

We meet Ellaria as one of Oberyn Martell’s lovers. They aren’t married, but they have a child together, Tyene. To avenge his sister Elia, Oberyn takes on the Mountain in a trial by combat; he dies because he spends too much time extorting a confession from the Mountain for his sister’s murder, and doesn’t wear a helmet. Ellaria, in turn, wants revenge for him. Oberyn’s brother Doran says that they can’t take on the Lannisters in a fight they will lose, and they certainly won’t kill their royal hostage, the innocent Myrcella Baratheon, in revenge. Ellaria then goes off the deep end; she poisons Myrcella fatally, kills Doran and his son, and agrees to join Dany’s alliance for war.

This backfires, badly; Cersei has made her alliances, and she aptly points out that Myrcella was an innocent bystander who had no part in her family’s schemes. When Cersei receives a captured Ellaria and Tyene, she locks the two up, poisons Tyene with the same lipstick used on Myrcella, and promises that Ellaria will live long enough to see her daughter’s corpse rot. That storyline ends rather abruptly, with Ellaria and Tyene waiting in the dungeon for the end.

In the books, Ellaria argues against seeking revenge for Oberyn, despite what the other Sand Snakes want. Doran agrees with her and tells her to go to her four children. As she puts it, the death didn’t bring her lover back, and he wouldn’t want others to slay innocents for him; also, her daughters may engage in this pointless cycle and sacrifice their lives as well. I can’t believe I’m saying this, but in the books it makes more sense.

Why was the Change Necessary?

Did we really need Ellaria to become the one who would hurt a girl—a girl no older than her Tyene? And did we need harebrained revenge to justify how Cersei could persist in gaining victories against her enemies? Viewers pointed out that Ellaria came off as unreasonable and hypocritical. Murdering her own family totally crosses the line. The writers decided the best fate for Ellaria was to give her to the show’s most sadistic character. Which, yeah. Why?

There is no clear answer. Maybe they wanted to give a reason for Cersei to gain victories. Even so, there are better scenarios that don’t throw characterization in the mud.

You could do the same arc, where all the Martells are in conflict about how Oberyn died for nothing and didn’t avenge his sister. Have Ellaria’s daughters talk about revenge, and make it more about the ongoing theme of settling a blood feud versus venting your rage and grief on the world. She and Doran could have their reasonable talk, where Doran also worries about crossing the line and if they can truly avenge all their losses. If the Martells enter Dany’s alliance, they could still lose badly, He lost Elia already, and now Oberyn. Myrcella has nothing to do with the plot, and the whole point of Tyrion sending her to the Martells was damage control and to remind Joffrey and Cersei to not act like idiot politicians. If Myrcella still needs to die for Cersei to make her claim to the throne, then you could write it as a rogue Sand Snake or the coup from the books that injured the young girl.

Season 8 and the End

While I’m still not going to watch full episodes of Game of Thrones and will keep up via spoilers, I do wonder where the revenge theme will go. Dany and Jon have tried to convince Cersei to ally with them against the wights and have failed, while Jaime has decided to join their cause. Arya, Bran, and Sansa have vowed to stick together now that they’ve killed Littlefinger and avenged their father.

“In the game of thrones, you win or you die.” But that doesn’t speak for the blood feuds that ensue or the pain. If Dany retakes her throne, or Sansa outlives the other contenders, that would be interesting. This world seems to support the Inigo Montoya characters, who make sure the people they kill are guilty and deserve a sporting chance before running them through their swords.