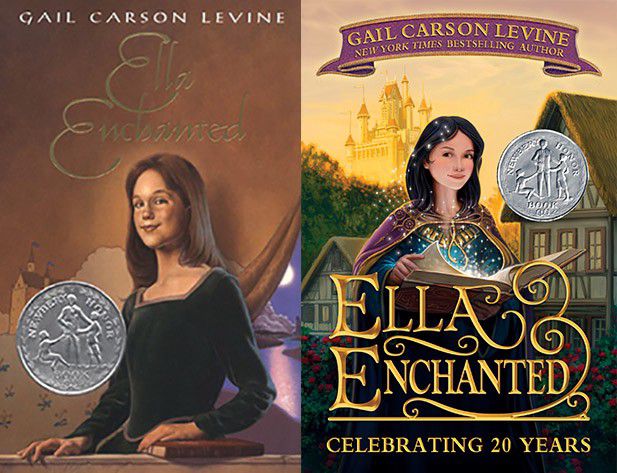 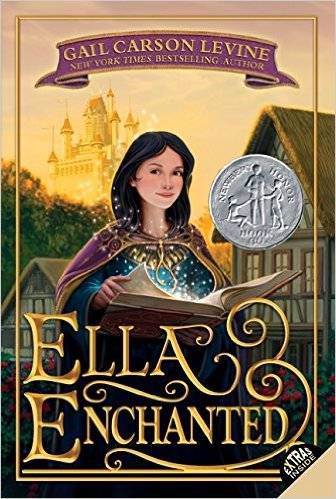 Ella Enchanted by Gail Carson Levine is one of my favourite books of all time, and it has been since I first picked it up as a kid. If you’re not familiar, Ella Enchanted is a middle grade retelling of Cinderella, in which Ella is cursed with obedience. (If you’ve only seen the movie, I beg you to try the book. The movie is slapstick fluff. The book has a lot more going for it.) It’s beautifully written, the world is entrancing, and the characters have stuck with me through the years. Recently, I checked out the audiobook and have been listening to it as I fall asleep. I’ve reread the book many times (I’ve gone through a few copies), but this time through I really started to absorb why this book had such staying power for me: it’s a feminist fairy tale.

Cinderella was always one of my least-favourite fairy tales. But Ella Enchanted gives an explanation for the passivity that bothered me in many classic fairy tales. Ella is cursed to be obedient, which constrains her without making her personality obedient. In fact, Ella is defiant and stubborn. She fights her curse. She finds loopholes. And that’s exactly what the feminist backbone of the story is: agency. This is a story about agency, and how terrible it is to have agency taken away from you, but also how Ella still holds on to some of it, even when everyone around her wants to take it away.

Ella Enchanted is also a book mostly populated with women. Ella’s mother dies in the first few pages, but her influence is prominent in Ella’s life. Mandy, her cook (and fairy godmother) is the closest family she has remaining (her dad hardly counts), and her gruff-but-loving personality is a sharp contrast to her mother’s joyous, easy-going nature. The villains are also women: the fairy Lucinda is the one who gave Ella her curse, believing it to be a blessing. Her reckless, giddy approach to magic is precisely the opposite of Mandy’s “small magic” edict. But where Lucinda thinks she’s handing out blessings, Ella’s stepmother and stepsisters are more straightforwardly wicked. Still, Hattie and Olive in particular are believable and even intriguing.

The romance is certainly improved in this retelling. “Prince Charming” (Char) is a whole person, not just a cardboard cut out, and their relationship evolves slowly, over time. They write each other letters over months, learning about each other’s flaws and quirks. They have a rapport. And the obstacles to their relationship make sense in the narrative—they don’t feel like needless plot devices to keep them apart until the last moment.

But it is that last moment that makes the book for me. So this is my fair warning that the rest of this post will contain spoilers for the ending of both the movie and book version of Ella Enchanted!

One of my least favourite things about the movie adaptation was how it ended. In the book, Ella realizes she’s a risk to Char, and she attempts to distance herself from him to spare him or the kingdom that danger. In the movie, Ella is ordered by a mustache-twirling villain to stab Char. Like the rest of the adaptation, it takes something subtle and emotional and makes it cartoonishly exaggerated. But worse, in the movie Ella simply tells herself “You shall no longer be obedient!” And that’s the end of that. In the book, she attempts to do this early on, and it’s not successful. Which makes sense, because if it was that easy, why wouldn’t she have done it long ago? Why wouldn’t her mother have said “Don’t be obedient anymore”?

The end of the book is much more emotional. Char says “Marry me!” without, of course, realizing that Ella is cursed, leaving her no choice. She rocks back and forth in a chair, trying to resist obeying and thus putting them all in danger. She thinks of all the times she’s been forced to be obedient: her childhood self, shoveling cake into her mouth through tears because Mandy mindlessly said “Eat up,” nearly being eaten by ogres who just had to tell her to stay put, her mother’s necklace being snatched away by Hattie, and being put in countless other dangerous or humiliating situations that she had no control over. She clamps her hand over her mouth to stop the consent the curse is trying to force her to give. She swallows the words. She keeps rocking, seeming about to collapse or vomit. But instead, she goes deep inside herself and finds her strength. She pushes through and saves herself. She finds her voice, and she breaks the curse through her own sheer strength of will. It may be less neat, but it’s incredibly powerful.

The curse being broken means she is free to marry the person she loves: Char. But she declines the title of princess or queen. She instead takes up the title “Court Linguist” and “Cook’s Helper.” She slides down the royal banisters with the prince. She and Char have children, but she refuses to be left at home when he’s travelling. She comes along, and Mandy takes care of the kids. But most of all, she delights in making decisions. She takes joy in saying “No,” and what a feminist happy ending that is.