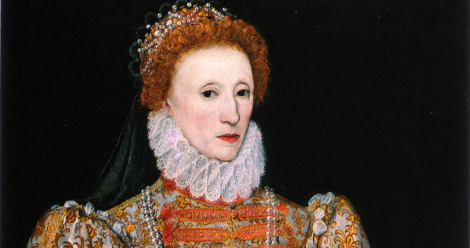 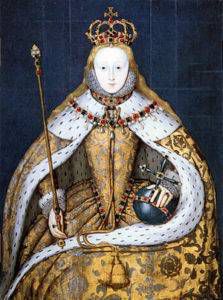 The Virgin Queen. Good Queen Bess. Gloriana. By whatever name one called her, Elizabeth I, daughter of Henry VIII and Anne Boleyn, granddaughter of the indomitable Elizabeth of York, was no woman to be trifled with. On September 7, we mark the 484th anniversary of her birth and the beginning of a long, tumultuous, vibrant life. Her reign is known as the Golden Age of England, during which time writers such as Shakespeare, Marlowe, and Spenser crafted their literary masterpieces; artists like Hilliard, Gower, and Segar painted portraits which are still recognized the world over; and the music of Tallis, Dowland, and Campion echoed in cathedrals and town squares alike. Elizabeth may have been the apex of the British monarchy (in my humble opinion), but there are a few things not commonly known about this Renaissance powerhouse. 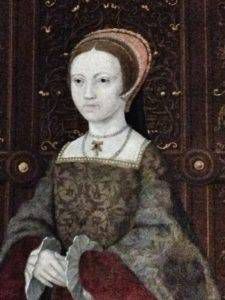 Elizabeth with Anne Boleyn’s “A” necklace

Elizabeth may have been more traumatized by Anne Boleyn’s execution than she could risk admitting to. Anne was beheaded by Elizabeth’s father, Henry VIII, on false accusations of treason and adultery before Elizabeth was three. Elizabeth grew up hearing her mother called “The Great Whore,” a witch, an adulteress, and worse. However, there are signs that Elizabeth was secretly devoted to her lost mother in ways she couldn’t express openly. A locket ring was removed from her hand after her death which held a miniature of Anne. In a family portrait painted when she was somewhere between ten and fourteen, she also wore a necklace with her mother’s “A” at her throat, an act which would have landed her in quite a lot of trouble had her father noticed it. Noncompliant already! At various times of her youth, she was a princess, declared a bastard and removed from the line of succession, reinstated, a political prisoner held in the Tower, and survived a sexual scandal that led, in part, to the execution of Sir Thomas Seymour. All without her mother there to comfort her.

Elizabeth was a tremendously skilled writer, something that is often overlooked even today. She penned her own letters and speeches, which were highly valued literary genres at the time. She even revised some of them for the purpose of publication. She also wrote some of her own poetry and songs, and her influence on the literature of her time is undeniable. Spenser, Shakespeare, Sydney, and others all credit her with inspiring many of their works. Spenser, for example, wrote The Faerie Queen for Elizabeth; Shakespeare wrote A Midsummer Night’s Dream for her.

Elizabeth was a polyglot. This wasn’t uncommon for nobility of her time. Humanist education ensured she would have been fluent in English, Latin, and French. However, she was fluent in six languages by the time she was 11 years old: French, Greek, Latin, Spanish, Welsh and of course English. She also studied other languages beyond these and had a functional understanding of Flemish, Italian, and Gaelic. She learned Gaelic possibly as part of her diplomatic attempts to subdue an Irish rebellion in the 1590s. Her oratory and diplomacy skills were great assets for Elizabeth. She often used flirtation and flattery in her diplomacy to goad her male contemporaries into granting her political wishes. One example of this is her address to Parliament with regard to her marrying. England was in dire straits when she came to the throne and she was pressured on many fronts to marry to secure various alliances and produce an heir, yet Elizabeth, as we all know, remained steadfastly unwed while still maintaining good relations with the majority of Europe throughout her reign. In a 1559 speech to Parliament, she said,

“…I am already bound unto an husband, which is the kingdom of England, and that may suffice you. And this… makes me wonder that you forget, yourselves, the pledge of this alliance which I have made with my kingdom. … And reproach me so no more… that I have no children: for every one of you, and as many as are English, are my children and kinsfolks…” (Elizabeth I, 2000, p. 59).

Remaining unwed and fully in control of her government during a time in which women were most often used as bargaining chips, means to getting heirs, securing alliances, and bettering one’s social standing was a testament to Elizabeth’s strength of will and shrewd political acumen.

Elizabeth created the Act for the Relief of the Poor in 1597, which was the first fully comprehensive bill for poverty relief. It was later amended by the Elizabethan Poor Act of 1601, which remained unchanged until the mid-1800s. The Elizabethan Poor Act essentially taxed the wealthier citizens of the country to provide food, shelter, and clothing to the poor, generally within their own communities. People who were unable to work, such as the very young, the elderly, and the mentally or physically disabled were cared for in an almshouse or poorhouse. People who could work were sent to “houses of industry” so that they weren’t labeled as vagrant, which was a hanging offense. Children who were old enough to work were made apprentices in various trades. People who were too lazy to work, though, were on their own and would either have to decide to work or would eventually wind up in prison or be hanged as a persistent beggar, as the term was known under the Vagrancy Act of 1547 (Rathbone, 2017). Elizabeth instituted what were, for the time, sweeping reforms for the care of the poor.

If you are interested in reading more about Elizabeth, the following books are strongly recommended.

The Collected Works of Elizabeth I

This is, well, the collected works of Elizabeth herself. Her letters, speeches, poems, all nicely gathered together here. If you want to get to know the woman, there’s no better place to do so than by reading her own writing.

The Book of Common Prayer

This is not a book about Elizabeth or her England, but it was a defining text of Elizabethan England. The Book of Common Prayer, written by Thomas Cranmer, was central to Elizabeth’s faith and her organization of the Church of England. No list of books about her or her period would be complete without it.

Elizabeth I by Margaret George

This is one of the best historical novels I have ever read about Elizabeth, full stop. Unlike many other novels which try to cram her entire 45-year reign into a few hundred pages, this one focuses mainly on the latter part of her reign, beginning when Elizabeth is 55 years old. It is also narrated from the POV of Lettice Knollys. Neither of these facts in any way detracts from the intensity of the story nor the importance of the events which took place in the twilight years of Elizabeth’s reign.

This was, if I recall correctly, the first historical novel I ever read about Elizabeth. I do not, however, recommend it because I harbor sentimental feels for it. I recommend it because it is quite simply the definitive edition of Elizabethan historical fiction out there. It is a doorstopper of a book and spans Elizabeth’s whole life, but the read is imminently worth it.

The Hidden Lives of Tudor Women by Elizabeth Norton

This one goes beyond the surface of general life and takes a long, hard look at what it was like to be a woman in Elizabethan England. There are a whole lot of reasons why Elizabeth remained unmarried, you guys, and I’m just going to take a guess that super common death in childbed might have been on her list of cons. This is a fascinating and accessible history of the lives of Tudor women, though it doesn’t focus just on Elizabeth.

This is a scholarly book for Elizabethan scholars, but it shows another side of the culture with which many of us are familiar. It also shows that there are a LOT of things we don’t know about Elizabethan England.