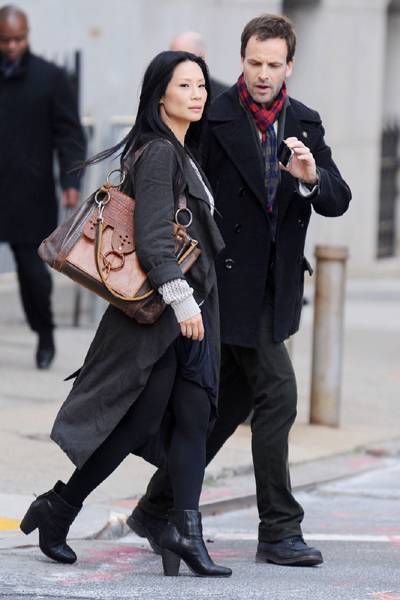 Kit Steinkellner– About two months ago I wrote a Book Riot post anticipating CBS’ Sherlock Holmes adaptation Elementary. The show premiered this past Thursday and it seems a recap is in order. Also, I got the ghost of Arthur Conan Doyle to take a break from hanging out in the spirit world and talk about the show with me. Thanks for joining us, Arthur Conan Doyle!

Arthur Conan Doyle– I was rather surprised no one has asked me to recapitulate an adaptation of my work on an electronic box prior to your request.

KS– Whatever, people are dumb and don’t know how to find ghosts. You ready to get started, ACD?

ACD– I’ve been quite ready since I died of heart attack eighty-two years ago.

KS– Let’s start with the basics of the plot. In this adaptation, Sherlock Holmes (played by Jonny Lee Miller) is a former “consulting detective” for Scotland Yard and is now working with the NYPD to solve cases they can’t crack. He’s also recently emerged from American rehab (I don’t believe his drug of choice was mentioned but this feels like a “Heroin Sherlock” to me) and Not-John-But-Joan Watson (played by Lucy Liu) is hired by his rich and powerful father (I know, I know, but what about Mycroft?) to be his sober companion for his first six week back out in the world. So what do we think so far?

KS– I  quite like her too! They sex Liu WAY down, girl is always wearing, like, a beanie with a hood on top of it or a collar that covers her entire face, and I really like how she gets to be smart, serious, and feminine without being at all sexualized. In interviews, the creative team has insisted that even though Watson is a woman, they plan on Sherlock and Watson having a purely platonic relationship, and I think the groundwork for that is set up well. Switching things up, what did you think of this new spin on Sherlock?

ACD– He had quite a lot of tattoos, as though he were a convict being transported to a penal colony in Australia, or perhaps the second-mate of a pirate ship.

KS– Oh yeah, he had that dragon’s wing that took up like half his arm. Also, his very nice muscles took up all of his arm.

ACD– Yes, I noticed he was often without his shirt.

KS– I think the vast majority of Lady America (and about ten percent of Man America) noticed that too.

ACD– Well, you know all of  such things, you plucky modern girl. You must remember to tell me what a Nielsen Box is.

ACD– I haven’t the slightest what any of those numbers mean, but I know thirteen million is a very great number of people.

ACD– Shall we talk now of the mystery itself?

KS– I liked it! I thought it had a couple very nicely played twists and turns, I didn’t see the ending coming, there was a lot of really stylish camera work and set pieces, Sherlock’s deductions were really clever and quotable, and they let Watson do two serious piece of detective-work business on her first case!

ACD– I didn’t let Watson do a thing until thirty stories in.

KS– Yeah, we have no attention spans here in the twenty-first century, sorry about that. We do have spacecrafts that land on Mars and vaccines for polio. Fun! So what was your take on the mystery, ACD?

ACD– It was serviceable.

KS– What stuck in your craw?

ACD– I LOATHED it when Sherlock uncovered the woman’s corpse and uttered the line, “Sometimes I hate it when I’m right.”

KS-Sherlock Holmes NEVER hates it when he’s right! That’s what makes him Sherlock!

ACD– I also did not care much for Sherlock Holmes having to “Google” his deduction that Watson’s father had strayed from his marriage.

KS– I know, Googling is for normal people! Sherlock knows that your dad messed up with your mom from the way you drink your tea or open a car door.

ACD– Will you be watching the second installment of the television program this week, Miss Steinkellner?

KS– I’m down. I think the writing is smart and classed-up, the production is a stylish one, and I really do like this Watson and Sherlock (though I can’t find it in myself to forgive the writers for leaving my dearly beloved Lestrade on the cutting room floor and replacing him with random-police-dude-Captain Gregson). You going to watch this week?

ACD– I will. Otherwise I will just be sitting here being a ghost.

KS– Great, it’s a date! We’ll see you all back here soon for some recapping of Episode Two: Was the Pilot a Fluke or is This Show Actually Good?