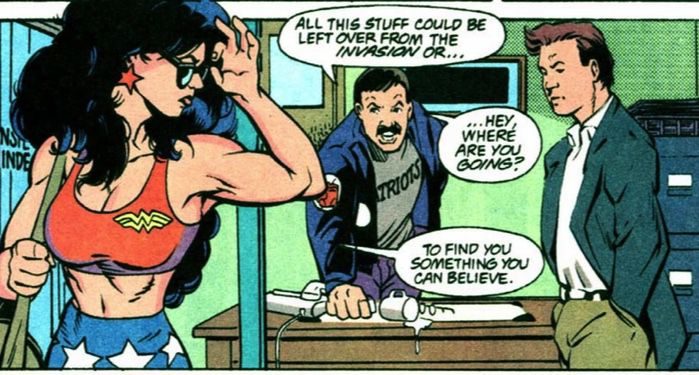 Ed Indelicato, inspector with the Boston Police Department, first appeared in Wonder Woman #15–16. Indelicato and his funky hat briefly show up to try (and fail) to catch a criminal he’s been after.

Despite working the same case, Indelicato and Wondy didn’t actually meet that day: their first interaction would have to wait until Issue 20, when they teamed up to solve the murder of Wonder Woman’s publicist. The investigation ended tragically, but Indelicato and Diana made a good team. Unlike his superiors, he trusted her immediately and did whatever he could to help her. He’d serve this role again in future issues, trying to follow up on clues Diana left behind even when his boss and his partner didn’t want to.

One other weird quirk: Issue 20 is largely narrated by Indelicato, who types up the events in Mickey Spillane fashion. This leads to some borderline creepy observations when he sets eyes on Wonder Woman for the first time. The phrases “firm, round curves” and “moist, shiny lips” are used.

Why is he writing this? The comic doesn’t tell us immediately. It’s not until Issue 50 that we finally learn, via his snarky partner Lieutenant Shands, that Ed is an aspiring novelist. And that his novel betrays a growing interest in Wonder Woman.

(Wondy’s reaction when a friend teases her about possibly dating Indelicato: “Oh, please!“)

Indelicato’s crush seems to deepen over time: he blushes very cutely when she offers him a grateful kiss after a tough mission, and he becomes increasingly willing to risk his (and his partner’s) career to shield her from harm. Indelicato’s devotion is put to the test after Shands is murdered, supposedly by an Amazon, and Wonder Woman herself is accused of participating in her sisters’ slaughter of multiple Gotham City cops.

Even here, Indelicato’s faith in the princess remains utterly steadfast. His only problem with her is that she tries to handle everything alone instead of letting him or her other friends help. He calls her out on this and tries to reinsert himself into the investigation by putting a tracking device on the Batmobile and then yelling at Batman. Gotta respect a guy who’s willing to get in the face of two superheroes like that.

Batman found the tracker immediately, and Indelicato then got captured. But still. He even insulted Deathstroke to his face in a later issue, which is objectively hilarious. Imagine you’re the deadliest super-assassin in the world and some random slob calls you a potty mouth.

Needless to say, Indelicato’s loyalty to Wonder Woman gets in the way of his better judgment at times and ultimately costs him his job with the Boston PD (though he later got it back). Adding insult to injury, his entire novel goes up in smoke in an apartment fire, and he has no back-ups. He eventually writes a new novel and gets it published. See how easy it is!

While Indelicato may be a good novelist, I’m not sure about his value as a cop. His loyalty to Wonder Woman clouds his judgment to the point that it contributes to his partner’s death. In Issue 64, he’s so busy narrating about what a dirty, rotten city Boston is and how bad things could happen at any moment that he ends up shooting multiple times at a shadow…which turns out to be a little girl playing with her dad’s gun. The only reason the kid doesn’t die is because Diana crashes through the window to deflect the bullets.

Would this have happened if he concentrated on his job instead of trying to be Sam Spade and freaking himself out in the process?

Maybe he learned his lesson from all this, because by Issue 77, he actually expresses skepticism when Diana poses a theory about a crime they’re both investigating. Their interactions become sparser and, unlike before when they seemed to be heading towards a solid friendship, are restricted to crime-fighting matters. There is no disagreement or blow-up between them that we ever see; they just seem to drift apart. One could speculate that Indelicato nearly shooting that kid drove a wedge between them, but that really is pure speculation.

(A more likely explanation: a new writer took over the book after Issue 62, and he may have wanted to focus on his own ideas and characters rather than his predecessor’s.)

Indelicato’s last appearance came in 2003, but that was just as part of a group shot in Wonder Woman #188. His last actual appearance was eight years earlier, when he encourages a distressed Diana to express her feelings more. She proceeds to obliterate his filing cabinet.

To date, Indelicato’s only live-action appearance was in the failed Wonder Woman TV pilot in 2011, where he was played by Pedro Pascal of all people. Pascal would get a second chance at being in a Wonder Woman property when he played Maxwell Lord in Wonder Woman 1984. Indelicato has not been granted any second chances as of yet.

Inspector Indelicato is one of the weirder supporting characters I’ve covered here. He’s definitely supportive in that he helps Diana however possible and wants to see her succeed. But his story and hers so rarely directly intersect in the early days. It takes years for Ed’s and Diana’s lives to become truly entwined, only for their relationship to peter out for no reason and with no conclusion. As a result, he feels incomplete as a character. I kept expecting his alleged crush on Wondy to lead to something — a confrontation, a personal admission that she’d never return his feelings — but we got nothing.

Does that mean DC should bring him back? I’m not convinced. He had his fun moments, but there wasn’t anything that marked him as really special to me. Besides, I’m not sure what we need right now is another heroic cop character, especially given how much superhero comics already feed into copaganda. To make him truly worthwhile, he’d need some serious reworking, and I’m not sure Indelicato is worth that effort.