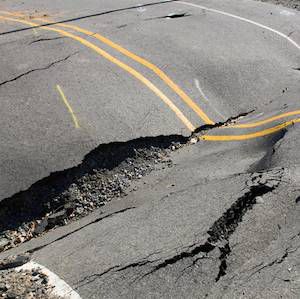 I was jolted awake at 3:20 a.m. two Sunday mornings ago by a 6.0 magnitude earthquake centered just down the road in Napa, CA. The city has sustained some pretty major damage, including buildings crumbling, water mains broken and fires running rampant, highways buckling and some minor human injuries. Everything is OK in my home, but naturally, when I was up and calming the freaked-out cats and dog, all I could think about were the earthquake books out there that capture the craziness of this phenomena a lot better than I can. My best friend’s mom wrote a book about it in the ’80s: Earthquake Ready. Damn if all that preparing didn’t leave my head as soon as I felt the first bump. If you can’t enjoy one in person, here are a few earthquake-centric books to get you rolling.

YA: Paper Quake, by Kathryn Reiss

In this splendid earthquake mystery, all of YA trope’s are checked (with a vengeance): a young girl whose more popular womb-sharing triplet sisters steal all the limelight feels neglected and overlooked, and oh, young Violet has also got an illness that ensures she’s always going to be the baby of the family, no matter what. But when an earthquake in the San Francisco family’s fixer-upper Victorian storefront unearths old letters and diaries from the past, but seemingly written to present-day Violet – that’s when things start to get real. Violet and her sisters traipse around the Bay Area, industriously seeking clues into the mysterious letter writer from the library, from older citizens, and from Violet herself. And when an actual earthquake hits, Violet ends up proving her strength and worth, solves the mystery, and saves some lives.

Short Stories: After the Quake, by Haruki Murakami

Six stories based loosely on the horrific 1995 earthquake in Kobe, Japan: these are less fantastical than the usual Murakami (one exception is the giant talking frog tasked with saving Tokyo), dealing more with the human emotions behind everyday relationships, like divorce and family strain. The earthquake theme runs through the stories, which begin with a scene familiar to all of us living in the 24-hour-news-world: staring at the TV, watching disaster footage from the relative safety of your home. But what Murakami’s prose really gets across is the fragile nature of life, how everything can change in one shaking instant, and the importance of living life in the moment.

Earthquake/Romance: I was looking at the ceiling and then I saw the sky, by June Jordan

June Jordan is one of my favorite poets in the world. This piece is actually the libretto and lyrics for an American opera, and is as lyrical and magical as any poem. The drama centers on several characters, all specifically 25 years old or younger, in South Central Los Angeles: a Black minister, an undocumented immigrant, a white cop, a gang leader, a TV news reporter, etc. Each person is going through their own dramas when the earthquake hits and changes everything. But the lyrical poetry is the best part. Witness: “It’s like suddenly/It’s like all that’s going on/It’s like very brief and underneath and on top of everything/It’s like you never do get over it.” The title alone stays in my head, particularly when the earth moves (think about it for a minute-the image is so beautiful, and horribly accurate). It’s like the love parts of West Side Story with modern lyrics and a truly earth-shattering event at the end.

Franzen’s second novel, another dense, multi-layered tale, details the aftermath of a string of unusual earthquakes on the East Coast (Boston in particular). Louis Holland’s grandmother is one of the quake’s casualties, a tragedy that leads to adventures with Renee Seitchek, a Harvard professor who foreshadows Freedom’s Lalitha, with her eco-aggressive certainty that these freak quakes are caused by a local corporation’s secret drilling and toxic waste dumping. And guess whose family just happens to run the big corp? Naturally, Louis and Renee eventually fall in love; there are trials and tribulations, dealings with family issues including abortion, and the ever-present possibility of another, more catastrophic quake. But what’s worse: being the evil corporate tool in a Franzen novel, or an aftershock? Exactly.
____________________