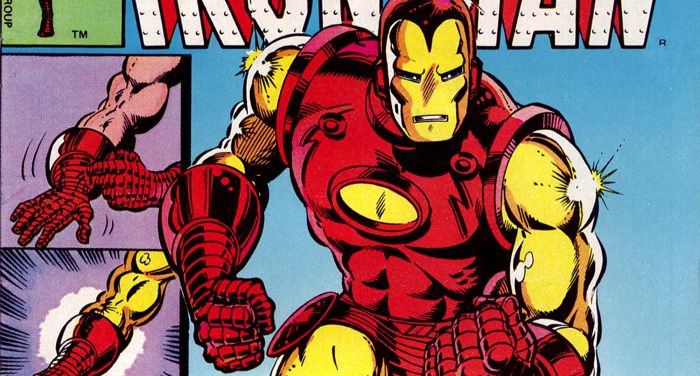 Iron Man! The most technologically advanced hero to come out of the 1960s! So why is he fighting that caveman?

It’s not unusual for comic book heroes to go through a bit of a weird phase in their early days (e.g. Superman leaping instead of flying, or Batman wearing tiny purple gloves and casually murdering people). Iron Man, who spent his first five years headlining Tales of Suspense before getting his own title in 1968, is no exception. Aside from the bulky, monochrome armor, he had to deal with what I can only describe as a grab bag of bizarre, mostly one-shot baddies. I am not the first to comment on this, but I’d like to go beyond pointing and laughing and explore possible reasons why Iron Man’s early adventures are so unusual.

At least Iron Man can take comfort in the fact that things were not as bad as they could be. Unlike Daredevil, who spent his first decade fighting the laziest villains imaginable, Iron Man got his act together fairly quickly. In ToS #46, he tangled with Crimson Dynamo, a Russian scientist destined to become an ally (and then die and be replaced by another, evil-er Russian, because comics hate Russians). Four issues later, the Mandarin debuted and rapidly established himself as Iron Man’s archnemesis.

(Does the racist caricature deserve that distinction? No. No, he does not. The point is, Iron Man finally had some popular, memorable villains to call his own.)

Enough backstory! Time to wind the clock back to 1963, true believers…

After spending half the page count worrying that his armor is too scary, Iron Man learns that the town of Granville has shut itself off from the outside world and started worshipping a giant Neanderthal named Gargantus. Gargantus, however, is nothing more than a robot powered by aliens intent on world domination. Despite their awesome technology, they are no match for Iron Man’s transistors! Get used to that phrase! It happens a lot!

I think Gargantus is a sign of the title’s growing pains. Iron Man had only debuted in the previous issue. Before that, ToS was devoted to mediocre sci-fi/fantasy stories featuring goofily named monsters like Goom, Googam (son of Goom), and Monstrollo. Gargantus fits that mold far better than that of your traditional supervillain. The fact that most of Iron Man’s creative team — Stan Lee, Larry Lieber, Jack Kirby, Steve Ditko, and Don Heck — was already working on Tales of Suspense before the changeover adds to the sense of continuity.

No, not Benedict Cumberbatch. This Dr. Strange is a jailed mad scientist whose intellect was recently enhanced by a lightning strike. (That is not at all relevant, but they sure do give us a flashback to it anyway.) After Iron Man defeats him with flashlight batteries, Strange escapes, hinting that he’ll return someday. He does not. He’d be completely forgotten today if not for the odd coincidence of names. (That other Dr. Strange debuted a mere month before, so both titles were probably in production around the same time.)

Strange is a step closer to your typical supervillain while still serving as a bridge to the types of characters ToS was already featuring. In addition to the monsters and aliens, another part of ToS‘s stock in trade was stories with ironic, Twilight Zone style twists. For example, in Tales of Suspense #33, a frustrated actor tries to con the world by posing as a “tax collector from space,” only to end up captured by real aliens and featured in an alien zoo. (“After all, he always wanted to appear before a large audience, didn’t he?”)

Strange’s defeat came with a different sort of irony. As you can see in the panels above, he has an estranged daughter, Carla. He feels bad about being an absentee father and wants to make up for it by literally giving her the world. But his supervillainy is exactly what has driven Carla away, and she helps Iron Man beat him.

Kala, Queen of the Netherworld (Tales of Suspense #43)

You may have noticed by now that Iron Man himself resembles your average ToS character: he’s a mustachioed, arguably amoral rich dude who runs around inventing stuff like super-accelerated burp guns and disintegrating rays. His origin story is pretty well in line with the title’s content, too: he is injured and captured by communists, and in order to survive and escape, handsome playboy Tony must spend the rest of his life hidden in a suit of armor (or so he believed at the time). He doesn’t even end the issue pledging to use his powers for the good of humanity; he’s still sad about having to live in the armor forever. (Fair enough, but not very superheroic.) If it didn’t say on the cover that this was “the newest…super-hero of all,” I wouldn’t necessarily have pegged this as a superhero story.

Why do I bring this up? Because Issue 43 is a lazy rehash of IM’s backstory. Tony is once again captured, this time by Kala, Queen of the Netherworld (AKA Atlantis), and he escapes by building yet another suit of armor (having left his regular one on the surface world). Iron Man defeats Kala by bringing her to the surface, where the atmosphere turns her old and ugly. Kala, obsessed with being beautiful, surrenders and goes home to marry her general, who simultaneously loves her while hating “taking orders from a woman” and thinking she’s arrogant. Thanks, I hate it.

This one features all the ancient Egypt tropes. When a group of archaeologists (with an assist from Iron Man) unearths an Egyptian tomb, they inadvertently revive the titular “mad pharaoh.” Hatap drags Tony Stark into the past to help him defeat Cleopatra, who finds golden armor very sexy. But Tony only stays long enough to defeat Hatap’s hoards and watch the dolt literally fall on his sword. And there is not one single dark-skinned person in this issue because, as Wonder Woman will tell you, it is too hard to find such people.

Originally, I wasn’t going to include Hatap in this article because I didn’t think he was “weird” enough. Fighting pharaohs was kind of a trend in the ’60s. The Fantastic Four went back in time to beat up Rama-Tut in Fantastic Four #19, and Batman repeatedly squared off against a phony King Tut (on TV, anyway).

But then I realized that this is the very reason I should include him after all. It shows that Iron Man having an odd backstory and off-the-wall villains were not attributes exclusive to him. In the early to mid-’60s, Marvel bucked every superhero trope that DC perfected two decades earlier by creating then-unusual heroes like the Hulk and the Fantastic Four — all of whom, like Iron Man, were not necessarily happy about their transformations. In fact, if you look at those characters’ early issues, you’ll see a lot of weirdo villains there, too. And Tales to Astonish — which featured Ant-Man and the Wasp, the Hulk, and Sub-Mariner at different times — followed a similar evolutionary track as Tales of Suspense: start as sci-fi mag, ease into superheroes.

None of this should be surprising, as the folks responsible for those comics (Lee and Kirby, et. al.) were also responsible for Iron Man and, before that, sci-fi and horror comics. It only makes sense that their previous experiences would influence their work. In short, while Iron Man’s early tales may be weird, they are not unusual.

Okay, so far this has mostly been the same old Tales of Suspense with Iron Man pasted over it. Even the back-up features (one or two per issue) have been the same type of predictable, milquetoast sci-fi stuff. But by Issue 46, the tide started shifting. I already mentioned this was the issue where Crimson Dynamo debuted. And in Issue 47, Iron Man had his first fight with the Melter, a much more “supervillain-ish” supervillain who, unlike previous foes, actually became a recurring nemesis.

First off, that outfit. Yikes. You can’t even call it a costume: he clearly just threw on some sweats and a Viking helmet. Second, he’s pretty tame so far as bad guys go. All he does is use his moldable clay voodoo doll to force millionaires into giving him all their money. The worst thing about this is he apparently stole said voodoo doll off some poor witch doctor. The whole “white man finds weird stuff in Africa” idea was also common in ToS, even appearing in a back-up story two issues ago, so we’ve once again returned to familiar territory.

Fortunately, Iron Man is able to invent a device in under an hour that can magically mold clay from a distance, thus nullifying both Doll’s powers and Doll himself. But really, Iron Man’s armor is the most exciting thing in this issue: he finally swaps over to the red-and-gold costume (and spends three pages explaining it to us).

The Scarecrow (Tales of Suspense #51)

No, not Cillian Murphy. You’ll wish he was, though, because this dude is WILD. We first meet him as a struggling vaudevillian, the Uncanny Umberto, who decides to use his skills as a contortionist to capture a random passing thief. Iron Man makes a comment to the effect of “boy, I’m sure glad you’re on my side,” to which Umberto wonders, “okay, but what if I wasn’t?”

Umberto starts his life of crime by stealing a scarecrow costume (because he’s “almost as flexible as a scarecrow,” which is a REAL reach, even for a contortionist) and a fellow vaudevillian’s trained crows. But apparently merely stealing is not good enough, for he swiftly makes arrangements with the Cubans to sell them Stark’s military secrets.

If that seems abrupt and nonsensical to you, that’s because it is. Umberto has all the depth and subtlety of a Reefer Madness character: the guy goes from a performer to a thief to a communist spy in less than ten pages. And for his troubles, he ends up stranded in Cuba with only his crows for company.

The Scarecrow is the last of the truly WTF villains from Iron Man’s early days. That’s not to say all of his opponents from this point on are works of genius, but the majority are more recognizably Iron Man villains instead of refugees from a fantasy comic.

That doesn’t mean the book was finished evolving, however. Starting with Issue 49, the Watcher, who was recently introduced in Fantastic Four, took over one of the back-up features. It’s still the usual ironic sci-fi stories, but now we have the Watcher as a framing device. In Issue 54, “Tales of the Watcher” was ToS‘s only remaining back-up. This didn’t last long: in Issue 59, Captain America took over the back-up spot. Thus did Tales of Suspense at long last become a full-fledged superhero comic. So it would remain until its 1968 cancellation, when both Cap and Iron Man finally got self-titled books of their own.