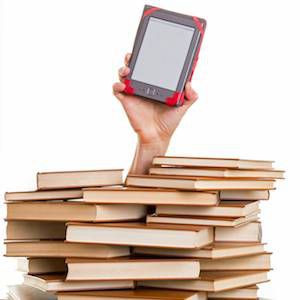 My first e-reader was a Kindle, a gift I loved and read straight into the ground over the course of several years. When it came time to replace it, a little over a year ago, another Kindle seemed like the convenient choice. But should I get a Kindle with special offers? Or pay a bit extra for one without? The “offers” (ads, really) were reportedly pretty unobtrusive—on the sleep screen and at the bottom of the main menu page—so I decided it wasn’t worth the extra cash to avoid them. And thus began my strange adventure with Kindle advertising, an adventure that taught me a lot about what books are, how they move, and why they may not be as special as we sometimes think they are.

When the Kindle with special offers arrived and I started using it, I found the ads unobtrusive, yes, but also a little bit off-target. The books it tried to pitch to me on the sleep screen were way, way, way outside my wheelhouse. Sentimental dog books. Amish romances. Baseball-y father-son stories. Christmas-themed romances. I think in the first year I used the ad-happy Kindle, I only ever clicked the “learn more” button once. The advertising was remarkably ineffective, but it wasn’t really surprising. The machine I used to read books was trying to sell me books, however poorly. (The suggestions at the bottom of the main menu page were a little more on-point for me, at least occasionally, with sci-fi and literary fiction getting some real estate.) 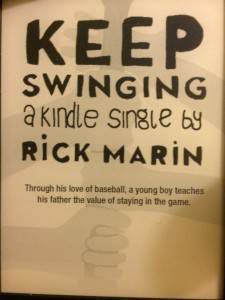 If you left my wheelhouse and went 9 billion lightyears away, you’d still be closer than this book.

In that first year or so, the vast majority of the ads were for books of various stripes or for the Kindle itself. In fact, there was only ever one ad, early on, that I recall being non-bookish, though that one was a doozy: a pool pump. 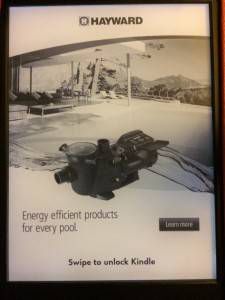 “…for every pool.” Except mine. Because mine doesn’t exist.

Believe me, finding your e-reader trying to sell you swimming pool hardware–especially when you live in a tiny apartment in the Midwest–is a little bit jarring. And a little bit hilarious. It was, though, only an occasional jolt, then the Kindle would settle back into pitching stories of people having sex and/or playing baseball.

But then, not too long ago, the ads got more…various. Suddenly, my Kindle wanted me to buy certain brands of toilet paper. 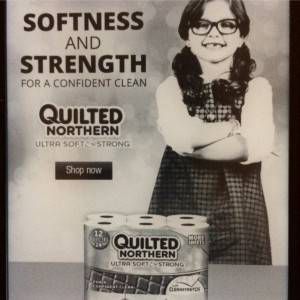 And particular jeans and jewelry: 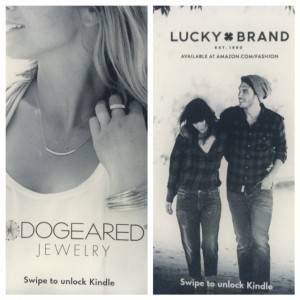 I never knew what I would find when I opened my Kindle case. Would it be an ad selling me a book? Would it be an ad helping me achieve a “confident clean” in the bathroom? An ad telling me I should wear plaid and distressed jeans–floppy-topped knit hat optional? It was an ad-venture (get it?) every time.

But while certainly a little peculiar, the toilet-paper-selling and jeans-hawking ultimately aren’t all that weird. In fact, they’re actually a reminder, kinda strange and kinda funny, that books are part of a commercial ecosystem that moves stories and steam cleaners in very similar ways. That may be especially true of the Kindle, considering Amazon’s totalizing ambitions and aggressive merchandising, but it applies more broadly, too. Books are, in many ways and in many contexts, simply commodities. They aren’t sacred, and they aren’t just disembodied ideas; they are things (whether of paper and ink or bits and bytes) first of all, and they move around like things do. Sure, books tell stories, but other objects do, too. We use books to shape our selves and communicate those selves to others, but we use jeans and necklaces and swimming pools to do the same thing. Having an e-reader sell me toilet paper is a great way to short-circuit a precious or sanctimonious bookishness, to make it harder to be so certain that books are special and that, as a reader, I’m oh-so-special, too.

In other words: I love books and couldn’t live without them–but I feel rather the same way about toilet paper.