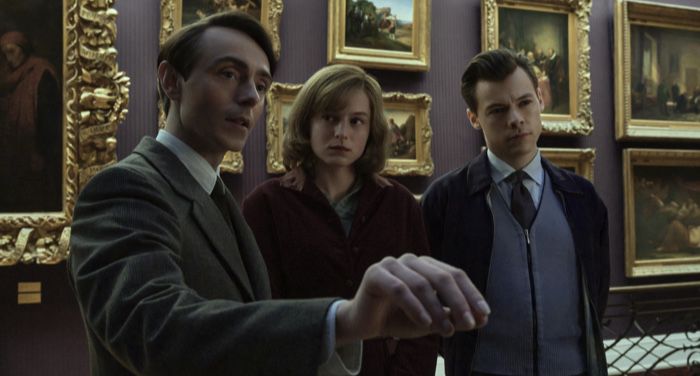 There has been quite the conversation lately about one Mr. Harry Edward Styles, of Reditch, UK, involving his debut as an actor and whether or not he performed nonconsensual spitting on Chris Pine during the premier of the now-infamous performance art piece that is the cast promotion of Don’t Worry Darling (2022).

But, my friends, we are not here to discuss these modern day shenanigans, however entertaining they may be. We are here first and foremost to discuss England in the early 20th century and the romantic life of Mr. E.M. Forster, celebrated author from nearly a hundred years ago. Forster was open about being gay with his friends, but because being gay was a capital punishment in England until 1967*, he was of course not out publicly. However, upon looking back, his choice of lovers seems to have been a somewhat open secret; it was his skill as an author that kept official channels from investigating his private life too closely.

Forster’s writing largely examines hypocrisy and the differences between classes in the United Kingdom. His most famous novel is A Passage to India, with A Room with View coming in arguably second or tied. He based his 1913 novel Maurice in part on his relationship with the philosopher poet Edward Carpenter and Carpenter’s life partner, George Merrill.

Forster had an eye for the younger gentleman; I suspect if he were alive and active today, he might be added to the recent graphs showing the increasing ages of male Hollywood actors and the flat line that represents the age of their partners. In 1960 he began a relationship with Mattei Radev, a Bloomsbury Group member, art collector, and Bulgarian refugee who was 46 years younger than Forster.

All this is to say, Edward Morgan Forster was not only a prolific and keen-witted author, but he must also have had a prodigious amount of personal charm and magnetism. His personality was certainly in full force during his relationship with Bob Buckingham, a policeman who was married to a woman named May.

Did the word “policeman” make your ears perk a bit? I hope so, because I have finally arrived at the reason we are all here: to discuss My Policeman, a film being released on Oct. 21 that is based on the book of the same name by Bethan Roberts.

In the book, Edward, Bob, and May are renamed Patrick, Tom, and Marion, respectively. Marion/May has been besotted with Bob/Tom ever since they were young. After years of separation, she meets him again and begins to pursue him as a love interest. But Patrick/Edward and Tom are already very close; so close that Patrick loans Tom his apartment so that Tom can propose to Marion. Both Patrick and Marion are deeply in love with Tom, who, as a policeman, must maintain a certain reputation and has therefore married Marion. He maintains a relationship with both Patrick and Marion, whose real-life counterparts also shared Their Policeman.

In the film, Tom/Bob is played by Harry Styles, who, in my opinion, is well-suited to the role. He is charismatic and a staunch supporter of LGBTQIA+ rights. He (and his style team) are following in the footsteps of David Bowie and Prince in visually redefining masculinity. While it would also have been cool to raise an already-working bisexual actor to the role, and regardless of how we feel about him in general, it is a fact that Styles will bring a very specific star power to this film. Recast Tom as literally any other actor and you have a gorgeous, emotional art house movie; cast Tom as Styles, and the audience broadens to many, many fans who would otherwise not have attended and some of whom will inevitably be brought into the spectacular oeuvre of Forster’s life and work.

Styles is well-paired with Emma Corrin as Marion and David Dawson as Patrick. I am particularly delighted that Dawson bears more than a passing resemblance to Forster himself; a detail that I’m sure wasn’t an accident.

After My Policeman debuts in theaters on Oct. 21, it will be available on Amazon Prime on Nov. 4. The book is available here, and if you’re interested in reading more of Forster’s work — work that got him nominated for a Nobel Prize an incredible 20 times — you can find Book Riot’s Reading Pathway here.

*Don’t get arrogant, America: it took until 2003 for all 50 U.S. states to repeal anti-homosexuality laws.