Egomaniacs run the government, war threatens on every front, police target select populations, the environment is under threat, you are being watched, and technology runs amok. Sound like current or recent news? Not necessarily. Depictions of dystopias have been around for a long time, as long as writers have been willing to criticize their governments and predict the future. The oldest of the following best dystopian short stories was published in 1905, but dystopias are even older than that. Their roots come from depictions of utopias that indirectly criticized the writer’s current events, such as Utopia by Thomas More (1516) and The Blazing World by Margaret Cavendish (1666). In 1865, inspired by Thomas More’s Utopia, John Stuart Mill coined the term dystopia in criticism of the English government’s Irish land policy. Yet, while dystopias are deeply rooted in their current landscape, the best dystopian short stories tend to have messages that transcend time. Unfortunately, patterns of power abuse and fears of the future seem to be cyclical, and what someone feared in 1905 isn’t so distant from what we fear today. 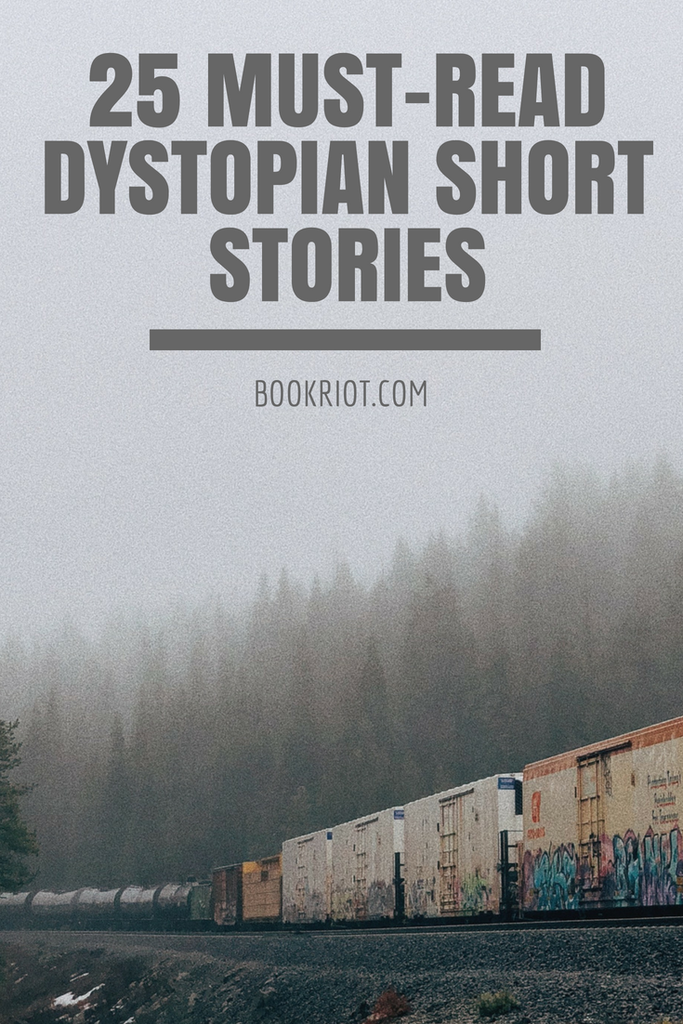 In the following 25 best dystopian shorts stories, heroes and heroines fight oppression and imagine new worlds, but they also succumb to tyranny and die. Well, these are dystopias. But most of all, these dystopian short stories should inspire change. The world does not need to become this bad, these stories warn. We have the power to change the future.

What dystopian should do is inspire us to change. To revolt. Here are 25 must-read dystopian short stories and anthologies—from classic authors to new finds—that should inspire anyone to rebel. And once you’re done with these, you should keep reading more.

“The Machine Stops” by E.M. Forster

Did you know E.M. Forster—the author of Howard’s End and A Room with a View—dabbled in SF? Forster wrote this story in 1909, before WWI, yet he imagines a global war, technology taking over lives, videoconferencing, and an early version of cell phones. It’s pretty impressive. And also a good story. 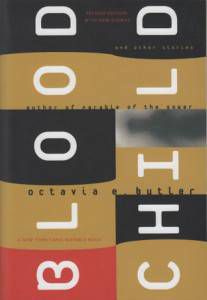 Bloodchild, and Other Stories by Octavia E. Butler

Butler is a must-read in SFF, and this collection of five stories, along with some of her essays, is a great starting point, or to pick up where you left off. These stories are both disturbing and lyrical.

Hossain, an Indian/Bangladeshi woman, published this feminist utopia in 1905. She imagined a world where women worked while men stayed home and cooked. It’s incredibly imaginative and innovative, especially given the time it was written.

Vonnegut needs no introduction. This short story is kinda like what The Rainbow Fish would look like in a dystopian future.

“The Lottery” started my love of dystopias. I even performed it as a monologue in high school. If you haven’t read it yet, you need to. And if you have, it’s one that’s always worth rereading.

The Minority Report and Other Classic Stories 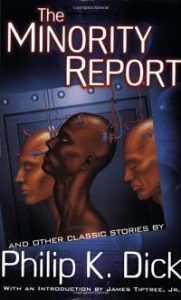 Have you watched the films Blade Runner? Total Recall? Minority Report? All these movies and more are based on Philip K. Dick’s stories. He’s a master of dystopian fiction. Even though I love reading his stories, fair warning that his depictions of women can definitely induce some eye rolls.

“The Ones Who Walk Away from Omelas” by Ursula K. Le Guin

Ursula K. Le Guin often depicted dystopias and problematic utopias in her fiction. This beautiful story won Le Guin the Hugo in 1974 and is often taught in classrooms It’s about a seemingly perfect city that has one dark secret everyone knows.

“Escape From Spiderhead” by George Saunders

The master of short stories tackles a dystopian prison system in “Escape from Spiderhead.” This short story also appears in the Tenth of December, a wonderful collection. 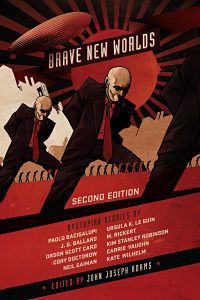 If you really want a dystopian fix, read this anthology of 33 dystopian short stories. It contains several of the stories on this list, including “Minority Report,” “The Ones Who Walk Away from Omelas,” and “Harrison Bergeron”

Nominated for a Hugo Award, “Damage” explores a fighter spacecraft’s memory and its revulsion of war. It’s a unique take on an AI perspective in a dystopian world.

This is an epic short story about Alonso—a brother, a friend, an uncle—in a crime-ridden city where the young die from gunshot wounds. There are many connections to today’s world in this searing story.

“Tin Cans” is a ghost story set in Russia told from the perspective of a corrupt politician’s chauffeur. It’s a disturbing and all too realistic tale. 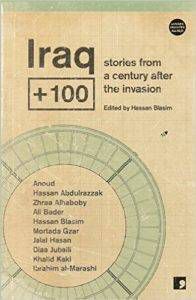 Editor Hassan Blasim asked 10 Iraqi authors what their home city might look like in the year 2103—exactly 100 years after the disastrous American and British-led invasion of Iraq. These 10 intriguing short stories are their mostly dystopian responses.

“Left Behind” by Cat Rambo

“Left Behind” is a conceptual story that entwines technology and memory to analyze the way society treats the elderly. It’s a gorgeous story and one of my favorites by Cat Rambo, who is a prolific and award-winning short story writer.

Lao Dao wants the best for his daughter, even if that means traversing the first and second space when he belongs to the third. Winner of the 2016 Hugo for best novelette, the world-building in this dystopian short story is amazing.

I love this character-driven short story about an alternate history where the Cold War wasn’t so cold and nuclear warfare has affected fertility. It was nominated for several awards. 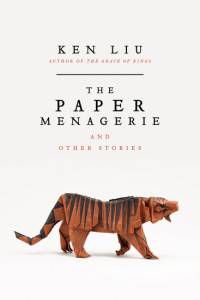 “A Brief History of the Trans-Pacific Tunnel” by Ken Liu

This is a beautiful though depressing tale where a man recalls his time working on an underwater tunnel connecting two countries. It’s also collected in The Paper Menagerie and Other Stories, which has a few dystopian short stories. All of Ken Liu’s stories are worth reading for their poignancy and deft touch. I highly recommend the entire collection.

“Time capsule found on the dead planet” by Margaret Atwood

Margaret Atwood is the queen of dystopian fiction. This delightfully depressing flash fiction is less of a story than mythology and takes all of two minutes to read.

Clone Harry Lee competes to be the best clone Harry Lee. When he fails test after test even though he knows he’s giving superior answers, he decides to approach the top and demand to be allowed to pass the test. This story presents another unique dystopian world.

“We Ate the Children Last” by Yann Martell

Yann Martell is the author of the Man Booker Prize-winning novel Life of Pi. The title says everything about this super fast flash fiction read. 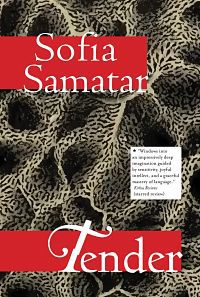 “Is This Your Day To Join the Revolution?” by Genevieve Valentine

Maybe it will be after you read this dystopian short story about the future of propaganda.

In this disturbing short story, the government strictly controls the population through child-rearing quotas. While dissimilar worlds, the themes are close enough that I wonder if writing this short story helped inspire her dystopian novel Bannerless.

“The Cartographer Wasps and the Anarchist Bees” by E. Lily Yu

In this utterly original dystopian short story, bees and wasps are the main characters, and they don’t like each other that much. It was nominated for a Hugo Award.

Loosed Upon the World 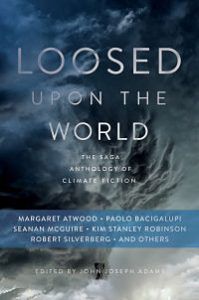 This collection of 25 cli-fi (climate change fiction) short stories edited once more by John Joseph Adams. This collection features fiction by Margaret Atwood (the same story on this list), Paolo Bacigalupi, Kim Stanley Robinson, and more. Many dystopias use climate change as one factor contributing to a dystopia, but this anthology centers on the environment.