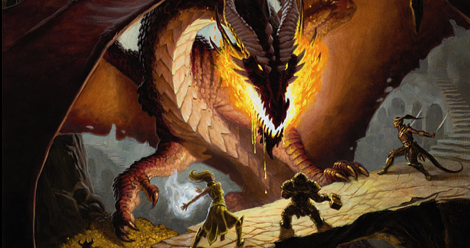 Some time ago, fellow contributor Johann Thorsson posted about the many ways playing D&D (Dungeons and Dragons, yo) helps young readers, which includes turning them into lifelong readers, building lifelong friendships, learning math, and increasing their vocabulary. However, what he failed to talk about was the fact that D&D and its accompanying culture are worthy of being considered as either reading or storytelling (or both!).

For those who have never had the pleasure of playing D&D, you might be wondering, “Isn’t that a game? That you play with little figurines that you move around a board? Why would that belong on a book site like Book Riot?” Well, gentle Rioter, you’d be both right and wrong. D&D is a game, but it’s a game based on reading, storytelling, and crafting a narrative. So before I begin flooding your feeds with enough D&D posts to choke a quaggoth, here’re four ways that D&D is all about the story.

Books are instrumental to playing D&D

While board games traditionally have just a single pamphlet of rules, D&D has a whole library. The most common ones are The Player’s Handbook, The Dungeon Master’s Guide, or The Monster Manual (The Big Three), but there are also tons of modules (pre-made campaigns hardbound and available for purchase at your local bookstore), (honest-to-goodness) novels, and art books – not to mention web sites, blogs, and articles. It’s almost impossible to get into the world without reading something.

Also affectionately known as “The Triumvirate” — melodrama is important in D&D.

People have been publishing D&D-based novels for almost 40 years, and there are currently dozens to choose from. They typically help expand the universe’s canon and make their way into general rules and common knowledge. For example, when you browse through The Big Three, you’ll see snippets pulled from various novels that give you a deeper sense of who these characters and creatures are. Chances are, once you start getting into D&D, you’ll be buying more books than you know what to do with.

D&D is steeped in literary influences and has had a long-reaching effect on numerous books, comics, video games, and movies

The history of D&D is long and complicated, involving Jehovah’s Witnesses, the FBI, accusations of Satanism, and a lot of societal snobbery – and that doesn’t even take into account the actual multiverse! When looking at the multiverse and its rules, you can find influences from Tolkien (such as the rangers and elves), various mythologies (such as Greek and Norse), European-centric history (such as the world building), and even classic literature (such as Dracula). Currently, you can find D&D influencing everything from comics (Rat Queens and In Real Life) to board games (Mansions of Madness) to movies (The Chronicles of Riddick). D&D is another link in our never-ending literary chain.

Last, but not least, the entire point of playing D&D is to create a story

When you’re working together with your friends (or soon-to-be-friends) navigating the Forgotten Realms, helping a dwarven king spy on some giants, or nicking some sweets from a delectable-looking shop, you’re creating a collaborative story in which you are the characters and your Dungeon Master (DM) is the narrator. The fun of D&D is not solely in killing a red dragon or taming a displacer beast but that you’re writing a story among yourselves. It’s a story of your own making, based on your own actions, and one that you can look back on fondly (or with aggravation) for years to come.

When I first started playing D&D, I was surprised to learn that doing so involved the same kind of skills and passion that reading does. I had to bring a suspension of disbelief, a vivid imagination, and a desire to live within and learn more about a different type of reality. I found great communities and a whole canon to explore, spending hours digging through various rulebooks to learn about the best way to play a character, what kind of monsters to insert in my campaign, and what could motivate my players. It was (and continues to be) addictive.

So give D&D a chance, Rioters. Grab a copy of The Player’s Handbook at your local comic or bookstore and dive in. If you like fantasy, fun, and roleplaying, it could just be your next obsession.