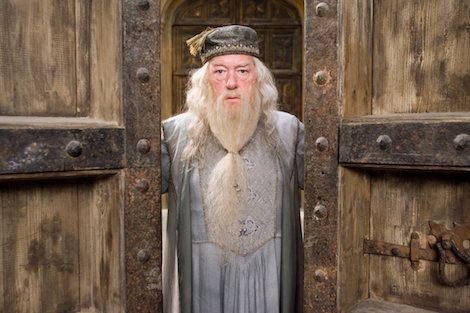 Editor’s Note: While we are no longer promoting J.K. Rowling’s works or products in light of comments she made against the trans community, this piece is a valid and important criticism of her work.

JK Rowling revealed that Dumbledore was gay in 2007. She didn’t write it into the books. And she didn’t put it into the movies. But she did act astonished at the idea that everybody hadn’t already realised that Dumbledore was gay – as if she hadn’t put in considerable time not writing him gay, while simultaneously writing multiple side characters as explicitly straight.

In the eleven years since her announcement, people have been debating this topic over and over again. Many people are so smug about it. They always suspected it. Was it not obvious, really? And how progressive is JK Rowling for including a gay character who is not only a powerful wizard and prominent character, but is actually absolutely crucial to the entire series!

Here’s the thing though. Suspicion is not confirmation. Assumed obviousness is not canon. Including a gay character and only mentioning it in the aftermath of having written all the books and then not including it in the movies is not progressiveness.

For JK Rowling, and many of her fans, Dumbledore has been gay for a long time. Then why is it that time and again his sexuality gets erased? Why is it that we’re meant to sit on the sidelines and just know that he is gay when straight characters get romance and relationships and marriage and babies and much, much more?

With the new Fantastic Beasts movie where JK Rowling and David Yates get the chance to explore Dumbledore and Grindelwald’s characters (let’s not even get into the Johnny Depp casting), the two have made the decision to straightwash Dumbledore once more. Instead of, for once, moving along with the time and actually making an attempt to cater to the diverse audience of Harry Potter, to listen to their voices, and to make an attempt at making Harry Potter an inclusive franchise, Yates and Rowling have opted to… not be explicit.

Because God forbid a book series that is based on the idea of love, where Harry is literally saved by the power of love, where love is the power that Voldemort and the death eaters don’t understand or have… our one canonically gay character be allowed to explicitly showcase his love for another man. That would clearly be going too far.

And to make matters worse? Yates and Rowlings’ faux progressiveness is the kind that continually sits on the fence. Because they don’t want to lose their marginalised fans by saying, we’re not going to portray Dumbledore as gay. Instead, they say well, maybe… in the future. Keep watching, okay? In fact, at a press conference, instead of addressing concerned fans, JK Rowling opted to say, “As far as [Dumbledore’s] sexuality is concerned … watch this space.” Yates and Rowling are taking zero steps towards actually being inclusive, but they still want all the cookies for being progressive by including a gay character.

To JK Rowling and David Yates: The year is 2018. You get no cookies for your faux progressiveness and faux inclusivity. And I, for one, am not sitting through your straightwashed portrayal of Dumbledore.