It has come to my attention that H & M, Swedish mecca of affordable fashion, is jumping on the already well-populated Stieg Larsson bandwagon with a line inspired by The Girl with the Dragon Tattoo. Personally, I never understood how Lisbeth Salander managed to stay so lithe, given her penchant for microwave pizzas, but Larsson made her skinny, so skinny she–and her pants–shall be.

If you prefer your pants not-so-skinny, or if your goth phase ended around the time MTV stopped playing videos, here are a few other clothing lines inspired by recent books, dreamed up for your sartorial amusement. Black eyeliner optional.

Warm up your crimpers and dig that teal eyeshadow out of your Kaboodle. A Visit From the Goon Squad’s clothing line comes with white leather, fringe galore, and all the cocaine-containing jewelry you could dream of. And the promo posters? Glamour Shots, natch.

If 80s glam rock isn’t your style, why not take a cue from Ann Patchett’s summer blockbuster State of Wonder and get decked out in Lady-Indiana-Jones jungle wear, complete with hidden pockets so you’ll never be without your anti-malarials? For you gentlemen, there’s fully-loaded  outdoor gear inspired by the wandering dude in Joshua Ferris’s The Unnamed. Helmet and straitjacket sold separately. 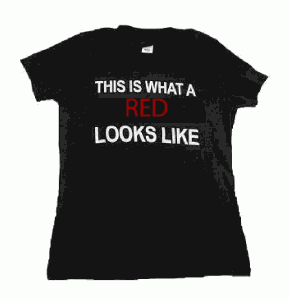 Political tees, circa The Future

Hillary Jordan raised the stakes from The Scarlet Letter by subjecting her criminals to “chroming” in When She Woke. The virus that causes criminals’ skin to change to a color reflecting their crimes is temporary, but we predict a movement in which ex-cons will reclaim the colors used to discriminate against them by rocking “This is what a RED looks like” tees as a nod to their feminist predecessors.

While we’re talking dystopian societies, let’s just all agree that the clothing line inspired by The Passage would be a combination of pieces stolen from the wardrobe departments of LOST and The Walking Dead. Capisce?

Lev Grossman’s The Magicians (also recently optioned for television) and The Magician King would bring about Hogwarts-esque pseudo-uniforms, only with vintage blazers, skinny jeans (what is it with kids these days and their damn skinny jeans?), and slogan tees proclaiming “Unreality is Underrated” because, you know, every emo kid needs one. Oh, and Converse. Or would it be Tom’s?

Let’s return to reality to end with J. Courtney Sullivan’s Maine, which just begs for refined sundresses, baggy boyfriend sweaters, perfectly tailored linen pants and, of course, Stepford Wife-ian aprons. Basically,  it’s Anthropologie to the twelfth degree. And the girl wearing it is so nice you can’t even hate her.

What have I missed? Holler back with your book-inspired clothing lines in the comments.