It’s a burning question I can’t ignore any longer, and I’ve brought along fellow rioter Amanda (of Dead White Guys) to help me select costumes for some of literature’s most memorables. Let’s start easy.

Holden Caulfield would dress up as a hipster. With his phony-detecting powers, he would hate hipsters, so he’d wear the skinny jeans and pearl-snap shirt ironically, but wear them he would.

The long-jilted Miss Havisham? Zombie bride, natch.Dostoevsky’s Raskolnikov would be Dexter (unexpected murderer with a bent toward over-philosophizing, what?), and Colonel Kurtz, that master of going off the reservation, would crack open a can of tiger blood and don the presently ubiquitous Charlie Sheen mask. The horror!

We imagine that Yossarian would get wasted as a double-speaking, red-tape-loving bureaucrat (paging Newt Gingrich!), while Jay Gatsby, were he alive today, would pop a bottle of Cris and channel P. Diddy (or whatever the hell he’s calling himself these days), throwing THE party for seeing and being seen. 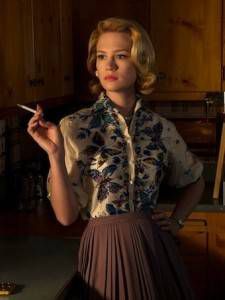 Fast-forward Daisy Buchanan 40 years, and this is what you get.

And for Gatsby’s love interest Daisy Buchanan, whose voice was full of money, there’d be no character more appropriate than the equally beautiful-and-damned Betty Draper.

Just for giggles, we’d dress Lisbeth Salander (Stieg Larsson’s Queen of the Damaged) as Pippy Longstocking. Scandinavian heritage is the only thing they have in common, but hey, everybody enjoys a thoroughly jarring contrast. While we’re at it, why not outfit Scarlett O’Hara as a Real Housewife of Orange County? The richest one, of course. Oh, and Anne Shirley (she of the Green Gables) would get drunk on cherry cordial and dress up as Marilyn Monroe.

Nabokov’s Humbert Humbert, that consummate Dirty Old Man? Santa Claus, of course. The explanation for this one is easy. “So much lap sitting,” says Amanda.

Jane Eyre, scoring a win for Single Ladies everywhere, would be Beyonce. Reader, she made him put a ring on it.

And we’ll end with this because the mental image makes us happy: John Galt (who is he?) as Parks and Recreation‘s bacon-loving, beer-swilling, axe-swinging Ron Swanson.

Your turn. How would you dress your favorite literary character for Halloween?