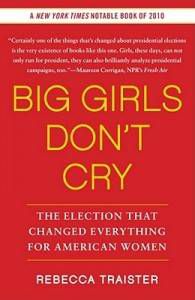 One of the best things about reading nonfiction is the bibliography at the end of any well-researched piece. If I love a book, I’ll often spend some time perusing through the works cited, picking out books that I want to add to my reading list. Every book becomes a rabbit hole, twisting down and around other great books to try.

Some authors include lots of fun tidbits in their works cited pages. Eric Larson adds a ton of stories and extra notes to his final section, so much so that it’s well worth the time to keep reading. At the end of his most recent book, In The Garden of Beasts, for example, I learned a joke Berliners (quietly) told about the Gestapo and giraffes.

I recently finished reading Big Girls Don’t Cry by Rebecca Traister, a look at the 2008 election and its impact on American women, which is just the sort of book that makes me want to read more. And, happily, the bibliography proved fruitful for enabling my book-list-making habit.

Most of the key female players in the book have written autobiographies or had a biography written about them, but honestly… I’m not always a fan of a contemporary political autobiography. I think they’re often self-serving and – especially if the subject is still a politician or public figure – sugar-coated in a way that give my eye-rolling mechanism a workout. But, if you’re interested, here are some options on that end:

I’m more interested in the books Traister specifically mentions in her book that influenced her thought process or provided background on Big Girls Don’t Cry. If she’s already done the research and proven the books are at least — in some way — worth reading, who am I to argue?

The first book that caught my eye was Gail Collins’s When Everything Changed: The Amazing Journey of American Women from 1960 to the Present (2009), a book that is actually on my overflowing TBR shelf already (thank you, Border’s going-out-of-business sale…). This book seems like it would be perfect as a more general background look at some of the issues Traister touches on that led to the 2008 campaign.

Diana Roth Furchgott and Christina Stolba’s The Feminist Dilemma: When Success is Not Enough (2001) looks like a good contrary opinion book from the list, a “look at women’s equality [that] dispels the myth that women need government programs to protect them and shows why feminists want to keep this myth alive.”

New York Magazine staff writer Ariel Levy’s Female Chauvinist Pigs: Women and the Rise of Raunch Culture (2005) looks at how “raunch culture” is being used as a new brand of empowerment for a young generation of women. Traister mentions Levy quite often in Big Girls Don’t Cry, so I’m curious to see what Levy has to say herself.

Caitlin Flanagan’s To Hell With All That: Loving and Loathing Our Inner Housewife (2006) is another contrasting opinion book, in which Flanagan argues that having too many choices has torn women away from the thing they want to do most – raise children and run the home. If I can get through this one without being too annoyed, it’s a possibility. Sometimes I like reading books that make me mad.

Anne Kornblut’s Notes from the Cracked Ceiling: What It Will Take for a Woman to Win (2009) takes on the same topic as Big Girls Don’t Cry but approaches it from a more strictly female-focused angle (Traister’s book spent a lot of time exploring the conflicted feelings voters had when it came to issues of sexism and race, which it doesn’t seem like this book accepts).

I could go on — a great thing about Big Girls Don’t Cry is that Traister cited so many great magazine articles, SNL sketches, blog posts, and books that it’s easy to dig down and learn more after finishing a book that I loved.