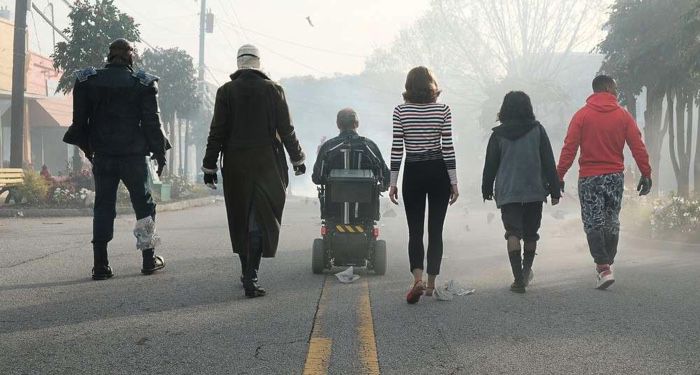 Lamenting how difficult it is to get your hands on your weekly floppies, my fellow comics geeks? Wondering when those delayed trades and collected editions might finally arrive? I don’t know about y’all, but I have some serious comic shaped holes to fill in my extremely limited existence at the moment and one of the ways I’m trying to do so is with both large and small screen comic adaptations.

There are two types of comic adaptations: those that aim for literal translation and those more concerned with adapting a book’s sensibility. What I’m aiming for with this Pass/Fail experiment is letting you know how well a given adaptation does with whichever route the powers that be chose to go (IMO, of course).

I’m not rating the screen property. It’s 100% possible to make a great comic book movie/show using only the barest whispers of a parent property, or to go frame by frame and end up with something awful. And let us not forget the make-it-so-terrible-it’s-stupid-fun-to-watch, balls-to-the-wall variety that surgically removes anything vaguely reality-based and splatters the rest all over Tom Hardy.

Let us turn our attention today to the wonder that is Doom Patrol.

Strap in, my geeks, because this one was born weird. 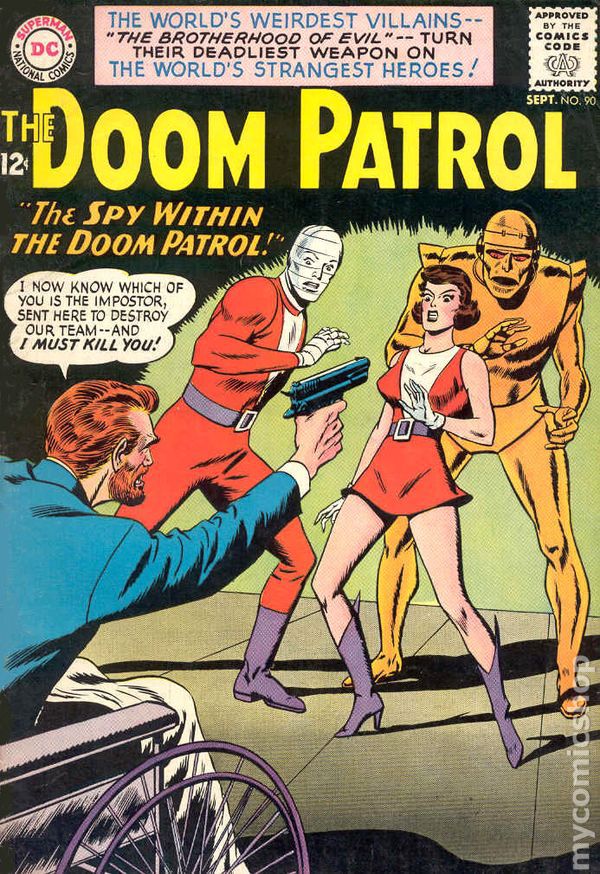 Created by Arnold Drake, Bob Haney, and Bruno Premiani, the Doom Patrol has never been on of DC’s most popular teams but they are one of the company’s most consistently published ones, never going more than a few years without a book (fun fact: Robotman is the only character to have appeared in every Doom Patrol series thus far). The original Doom Patrol first appeared in My Greatest Adventure 80 (1963) when scientist Niles Calder arranged “accidents” for Cliff Steele (car crash), Rita Farr (mysterious vapors), and Larry Trainor (radiation exposure), creating Robotman, Elastic-Girl/Woman, and Negative Man. Calder hoped that by cutting Steele, Farr, and Trainor off from their former lives and making them bitter, powered “freaks,” he’d force them together into a team willing to go on suicide missions to save the world.

Oddly, he was not wrong, though Rita does eventually meet and marry Steve Dayton (Mento, telepath with powers enhanced with a helmet of his own design) and together, they adopt Garfield Logan (Beast Boy: green dude, turns into animals), who joins the team.

There’s dying and new teams and resurrecting and, honestly, they get all the best villains: The Brotherhood of Dada (which includes, among others, the Fog and the Quiz), Captain Zahl (former Nazi U-Boat commander), Monsieur Mallah (Grodd but French), and Crucifer (Floridian Vampire who sounds more like a vegetable). Also Animal-Vegetable-Mineral Man who is, in fact, part vegetable.

None of the members of the Doom Patrol asked for their powers and none of them are thrilled to have been saddled with them. They’re weird, messy people with weird, messy abilities forced upon them by an arguably deranged ur weirdo. They screw up as often as they succeed, which lands them on the margins of even weird, messy superhero society, let alone regular society, which has never been all that forgiving of difference.

*Points at the internet* One more time for the dude bros at the back: comics have always been political.

Back to the weird, messy team at hand: at least they have each other, right?

Most of the time.

So, what kind of adaptation was DC Universe’s 15 episode Doom Patrol S1? How did they do?

The creative team definitely went for spirit with this property and that was 100% the right call. They pulled characters (the core team, much of the backstory, some of the quirkier details) from various Doom Patrol books, but these characters and their stories have passed through a lot of hands in the last six decades (Drake/Haney, Larsen, Morrison, Pollack, Byrne, Way) and everyone has done something a little different with the mythos though they’ve all all managed to maintain that sense of “other,” of “outsider,” of freak” that’s so fundamental to the Doom Patrol and very much the reason it works.

If your jam is a linear narrative that lays out a neat story as it moves from point A to pint B, Doom Patrol probably isn’t going to float your boat. This is a weird. ass. show. It does have a season-length arc, but the path from beginning to end is all twists and turns and starts and stops. You’ll get lost in the woods, stumble into a swamp, definitely fall over a couple of cliffs. If you’re lucky, you’ll wander onto Danny the Street and get to live a few episodes, protected and safe as your true self before you get thrust into Crazy Jane’s head with all of her personalities and the monsters. Alan Tyduk is both a reliable and unreliable narrator, also acting as the fourth wall–breaking villain of the piece; there’s a mouse named Admiral Whiskers who has a reoccurring role; and I’m not even going to try to explain the donkey.

Like the various Doom Patrol books, however, the show uses the bizarre and difficult and sloppy to explore what’s so fundamentally human about even the strangest of us, what’s intrinsic to all of us no matter if we’re wrapped in bandages or a brain in a damn can. We’re parents with children, we’re LGBTQIA+ in a time or place it isn’t safe to be any of those. We struggle with family and relationships. Our self-image is battered at the time we need it most. We’re forced to examine our intentions when all we want to do is forge ahead. We have to look at who really loves us and who we’re willing to risk loving.

Maybe it’s a little easier to do that when the surface is impossibly strange.

Doom Patrol gets a resounding Pass from me. If you didn’t have a chance to watch the first airing on DC Universe, the entire first season is now available on several other streaming platforms. Rumor has it the already announced second season will air simultaneously on DC Universe and HBO Max. Production was set to begin in November though I’d imagine with so many other productions being delayed that may change.