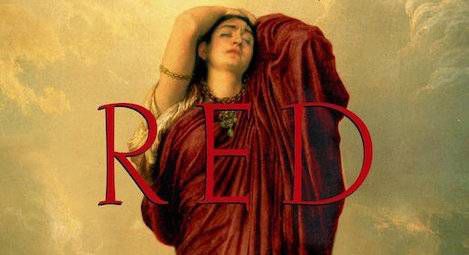 I was recently made privy to a list of mainstay Christian writers, referenceable and reliable, it was claimed, when those who like inspirational fiction ask a librarian for a recommendation, and they find themselves stumped. Some of the authors on it were familiar fare–C. S. Lewis, the Thoenes, that lady who writes all of the Amish novels (…one of them.). Some were a little more daring, like Tolkien, who, sure, was uber religious, though not all find the connection to his religion in work like Lord of the Rings.

One author, though, was present and absolutely did not belong. Her inclusion sent a red blaze from my ears to my face, and I had to bite my tongue while the presenter made it worse by qualifying her presence there.

“Sure, she comes from a Jewish background,” this woman said, “but her work has Christian themes. She does push the boundaries sometimes, but I hear that’s called midrash” (She pronounced it mead-rash, at which point I could no longer control the red) “and that is totally acceptable in some circles.”

The writer in question was Anita Diamant. The book in play was The Red Tent. While I am a fan of Diamant’s other work, I don’t actually like The Red Tent much, though I appreciate conversations it opens; and yet I absolutely cannot bear the idea of ceding it to the inspirational fiction folks. At least, not under the heading “Christian fiction.” At least, not as anything more than an articulation of a story we share, but one that is not, in this case, at all made to serve New Testament aims.

Here’s the thing: Anita Diamant doesn’t “come from a Jewish background.” She’s Jewish. She’s fully one of the tribe. And she’s awesome for it. I’ve dipped in her mikveh; I am fully capable of fangirling, hard, for her Jewish lifecycle books. She made The Red Tent a thing after publishers gave up on it by trekking from synagogue to synagogue across the United States and pushing it hard to fellow Jews, and I love her for that. It rubs me so wrong to hear someone praising her novel but hedging on naming or respecting her tradition.

Why can’t we call biblically inspired books what they are, and appreciate them as authors intended, without grafting foreign theologies onto them? The Red Tent riffs on a story that’s shared between three religions: of Jacob, Rebecca, Leah, Rachel, and Dinah, and particularly of what life might have been like for women navigating a man’s world, one that imposed traditions on them that constrained their own.

But whereas the Torah finds a place in the New Testament as a history leading to a messiah, it is a self-sufficient history in the Hebrew Bible. Leah and Rachel are not embraced there for someone they supposedly lead to centuries down the road; they are important because they are Abraham’s kin, because they are the first generation to be wed to the concept of “Israel,” because they are themselves. Their story, especially as it is retold in The Red Tent, is not one with Christian themes; it is a wholly Jewish family history.

And there’s nothing that requires a further explanation about that. Those who aren’t Jewish can obviously read and love that work of feminist storytelling, but they should not attempt to contort it to their own aims.

This is a frustration that recurs for me, particularly around adaptations of wholly Jewish biblical, or Bible-aged, retellings. It’s a pain I felt when Alice Hoffman’s The Dovekeepers–a gorgeous feminist approach to the siege at Masada–was adapted for television by Christians, and somehow became something that was no longer ours. Which, if you know the story of Masada, is a pretty deep affront.

It’s a frustration that raged fully for me when Darren Aronofsky’s Noah provoked ire from those who did not know that the nephilim and elements of paganism had a place in extrabiblical Jewish tradition, and were not simply the products of an overactive, atheistic imagination. Who complained that there was no mention of Jesus in that adaptation of the Bible story.

These things may seem like edgy Christian inspirational fare to some, but filing them as such, either as a condemnation or as praise, mistakes what they actually are: Jewish storytelling projects without Christian aims.

So I’d like Anita Diamant off of that list–though I was too meek to say so at the time. Perhaps she belongs on a read-along list, or on an interreligious inspirational reading list, but a Christian novelist she is not.

It would be great if listmakers could stop seeing that as problematic.