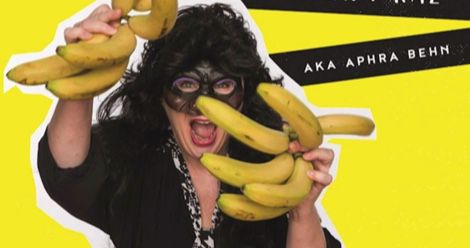 We had the opportunity to sit down with Donna Kaz, aka Aphra Behn, an unmasked Guerrilla Girl on Tour. She writes about her experiences as a Guerrilla Girl and performing artist in Unmasked: Memoirs of a Guerrilla Girl On Tour (2016). She recently released an ebook on activism in art: PUSH/PUSHBACK – 9 Steps to make a difference with art and activism (because the world’s gone bananas!). 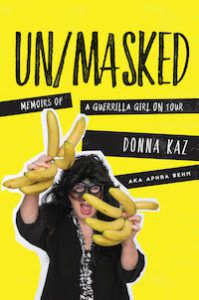 Elisa Shoenberger: I have to ask: what was it like being Guerrilla Girl?

Donna Kaz: Oh, it was mainly a lot of fun. It was empowering and it felt really good to focus on an issue and to be able to name names and call people out for their discriminatory practices. It was a very creative time. The girls are full of humor and creativity; making posters and stickers about the art world and the theater world was joyful. We felt like we were really doing something to attack sexism in society, specifically in the arts and the performing arts, which not a lot of people were talking about at the time. We felt like we were trying to make inroads into getting people to realize that the arts, which everyone thinks is so liberal, is actually very backward when it came to opportunities for women and people of color.

It was good to be educating people about the problem. Of course we don’t know how to solve these problems. We were focused on just trying to put the problem in front of the audiences, the curators, the artistic directors, the actors, the performance, everyone involved in the arts. It really started a dialog. Of course there was a lot of backlash. We got a lot of hate mail. There was infighting within the group at times. We were a grassroots organization with not a lot of structure, which was very educational. I think a lot of activist groups go through this period of a structure and restructuring and trying to figure out how to function.

Shoenberger: What made you want to write this book?

Kaz: I felt like I was at a point in my life where I wanted to share the tactics that I had learned and used as a Guerrilla Girl to pass on to the next generation of activists. I also felt it was  time for me to disclose my past as a survivor of domestic violence. It was a very long journey for me to come to grips with my story, to be able to speak about it and to be able to write about it. It took many years and it just felt as if that was the right time for me to come out.

My book came out about 10 months before the #MeToo movement resurfaced in a big way. It was nerve wracking. It was very scary to do that, but I felt that the best thing for me to do was to share my story. I started to think about how I ended up being a Guerrilla Girl. What in my life trajectory was that led me to that? I realized that my experiences as a young woman both surviving sexual assault and domestic violence caused me to speak out and identify as a feminist. Those two things were connected for me. That was my journey of connecting my origins of my feminist beliefs and how I ended up wearing a rubber gorilla mask and going around fighting for the rights of women and artists of color. 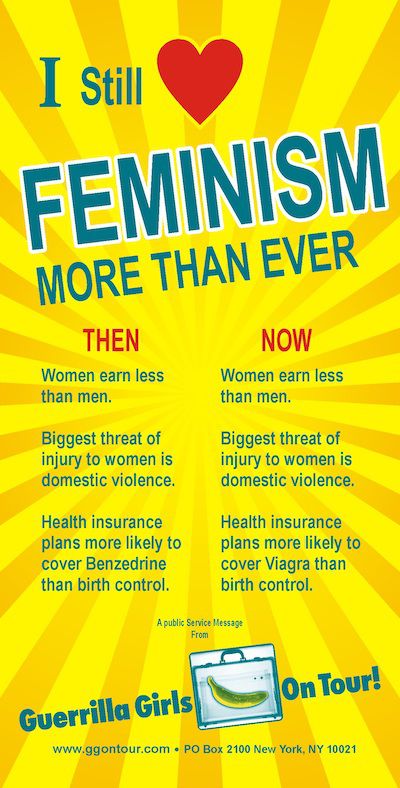 Shoenberger: How does it feel like to be unmasked?

Kaz: Oh, it’s great. It feels fantastic. I still consider myself a Guerrilla Girl. I still am an activist artist. I identify as that, but it’s very freeing to have shared my story without the burden of wearing rubber on my face. I’m trying to share my tactics with people.

When my book came out on November 1st, 2016, I was ready along with a lot of people in the United States for the year of the female narrative. Hillary Clinton was going to be president and it was going to be a great new age.

Then November 8th happened. I did a book signing at Bluestockings bookstore, a big feminist store in NYC, a few days later and it was one of the most depressing events I’d ever been at because everyone was still in shock. I did a reading and I answered the questions and all of the questions were: “What do we do about what just happened?” That informed my journey of writing my next book. It would be about how to make activist art, a sort of step by step book.

I talk about mainly the collaborative work that the Guerrilla Girls did. I talk about how an idea kept inside develops slowly and how people can form their own little huddles, 3–6 people, and come up with ideas about how they can address issues that they are passionate about with art, with performance, with stickers, posters, facts campaigns, letter writing, websites, things like that. 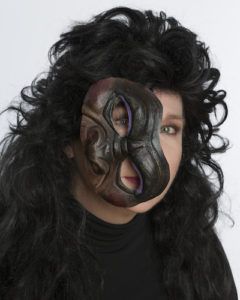 Shoenberger: Could you talk about the importance of humor in activism? I have to say you fulfilled a dream I never knew I had at your talk when you threw me a banana.

Kaz: Humor is really a very powerful weapon because if you can make somebody laugh, they become disarmed in a way and they’re more open to listening to what you have to say. So the use of humor can be very powerful in your message. If somebody laughs, chuckles, they find it funny, they’ll begin to think about what you are talking about. So it’s a great tactic to be able to use.

Of course everything isn’t funny. When you can, it’s a great way to get your message. People are attracted to humor. In my book, I also talk about the power of women’s humor. A lot of times in history, however, funny women are stereotyped as being unattractive or not intellectual enough. They have to be funny because they’re not something else that women are supposed to be. I think that humor is so powerful that it threatens some people. It’s sometimes hard to be funny because we will be criticized even greater because you have the power to make people laugh and pay attention.

Thank you to Donna Kaz, aka Aphra Behn, for taking the time to talk to us at Book Riot. For more information about Guerrilla Girls on Tour, check out: https://guerrillagirlsontour.com. And check out Push/Pushback – 9 Steps to Make a Difference with Activism and Art (because the world’s gone bananas).

More more books about feminism, check out this 2016 list of 100 Feminist books.