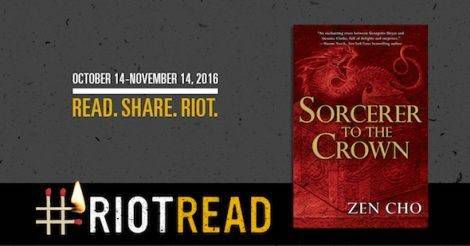 Sometimes you find a book unbidden, a story you wouldn’t have heard about save for happenstance and being in the right conversations at the right times. The Sorcerer to the Crown was one of those books for me last year, having heard about it from fellow contributors here.

From the first chapter, I found Zen Cho’s novel absolutely captivating. Zacharias and Prunella are some of the most memorable characters I’ve read, and they come to life on the page with delightful ease. Zen mixes British historical fiction with fantasy and Malaysian folklore with a deft hand. Her writing style excels at drawing readers into this complicated, dangerous world, and I for one can’t wait for the next book.

I recently had a quick chat with Zen about the first story she ever wrote, writing support networks, and some advice she’d give to her teen self.

How did you first start getting into writing? What was the first story you ever wrote, and how do you think you’ve grown since then?

I “started” a few times. I’ve been writing stories and bits of nonsense since I was a kid, but I only started regularly finishing stories and sharing them with strangers when I got into fanfiction as a teenager. I only began writing original fiction for publication much later, when I was in my mid-twenties.

According to my mom, my earliest story was a rip-off of 101 Dalmatians that I wrote as a six-year-old, about a plucky little girl whose pet rabbit is kidnapped by villains who want to turn it into a fur coat. While recounting his wicked plan to a fellow conspirator over the phone, the villain starts laughing maniacally and drops dead from his fit of laughter, so the little girl is able to recover her pet rabbit.

I’d like to think my prose has improved since then, but I still have difficulty working out story climaxes, and I still come up with ideas by remixing things I’ve read and watched.

What were your favourite parts of Sorcerer to the Crown to write?

I really enjoyed the scene where Prunella learns to fly around on a cloud, all the scenes with the witch Mak Genggang – she was one of those helpful characters that write themselves – and every conversation featuring the hapless dandy Rollo.

I loved Prunella and Zacharias, especially since they both speak to the experience of navigating a world where you are both inextricably part of society and yet an outsider. Between them, who would you say you identify with more?

Both Prunella and Zacharias have parts of me in them – I find you have to plant bits of your soul into your viewpoint characters for them to come alive. In terms of superficial similarities I’m probably more like Prunella, in that I’m a short, strong-willed woman, but my character arc is more like Zacharias’s!

The literary scenes in England, Malaysia, and the United States are quite different, reflecting the cultures that exist within each country. How much of an influence would you say each country has on your writing?

I grew up in Malaysia, a former British colony, and I live in England, so those two countries have had the most influence on me as a writer. I wouldn’t say the United States has had much influence on my writing at all. 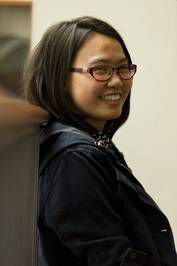 You mentioned in an interview with Rochita Loenen-Ruiz at Push that “you need support and resources in order to be creative.” What has your own support system been like, within the book community and outside of it?

I’ve been very fortunate to have good support networks. I’ve always had sufficient practical support that I have a reasonable amount of leisure time – so, for instance, I don’t have to juggle three jobs to make rent, and if I want to write instead of doing the laundry someone else will make sure I’ve got clean clothes. As a budding writer I got a lot of encouragement from the fanfiction community: having these smart, interesting people tell me that they enjoyed my stories was a huge confidence boost. As I say in the Push interview, the challenges I struggle with most are internal – the fear of the blank page, the conviction that I have nothing worthwhile to say or won’t be able to work out an interesting way to say it – so just knowing that there were people who enjoyed my writing was incredibly important to me.

What would you tell your sixteen-year-old self today?

Get Mom to let you give up the violin – there’s really no point in keeping on with it. Get to know the people in your English literature class. Try to write 500 words a day, even if they’re not very good words. Don’t worry so much.