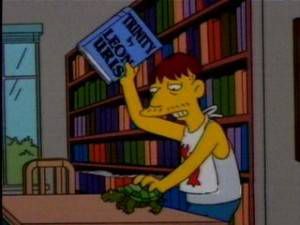 “Nothing cracks a turtle like Leon Uris,” says Cletus, the Slack-Jawed Yokel, in a memorable Simpsons episode.** When that episode first aired in 2001, I had a near melt-down of excitement — the kind of giddiness you only experience when you get a really obscure reference. Trinity is in my Top 5 favorite books of all time and I’ve read every word Leon Uris has ever published. Certainly, The Simpsons’ target demographic doesn’t exactly overlap with historical fiction-reading book nerds, so I started wondering then how many people knew Leon Uris from Leonardo DiCaprio.

And that’s a question I’ve been thinking about even more lately. Indeed, I’m starting to think the original masters (not counting Tolstoy or Margaret Mitchell, of course) of the historically hefty novel, Uris and James Michener, are dying slow, torturous second deaths. Uris died in 2003 and Michener in 1997, and while much of their huge catalogs is still in print, these novels seem to be sliding slowly off the radar of most readers. This is especially apparent when you walk into any used bookstore — as I did just last week — and find more Uris and Michener books than just about any other author not named Stephen King.

This is impossibly sad. I don’t think it’s overstating things to say that these were world-changing writers. Like many other readers, I’m intensely interested in history. But like many readers, I totally snored through my incredibly dull, lecture-based high school and college history classes. For me, it wasn’t until after college that my love for history really crystallized. Maybe it was because I was reading books like Michener’s The Source and Uris’s Exodus when I didn’t have to read them. Or maybe it’s just because these — and many of their other novels (and there are LOT!) — are just really, really good. Whatever it was, these two writers kindled a love of learning about history that no college class ever did.

There are a several historical novelists still publishing that do an adequate job of carrying the torch Uris and Michener lit: Bernard Cornwell, Edward Rutherfurd, Herman Wouk (though he’s 96 years old, and hasn’t published in a while), John Jakes, Jeff Shaara, Colleen McCullough, Hilary Mantel, etc. And while these writers are good and I’ve enjoyed their novels, they’re just don’t hold the same allure for me as Michener and Uris. That’s natural, I suppose. Michener and Uris were the first, and you can’t ever substitute adequately for your first.

So, again, it’s extraordinarily sad to me that they seem to be falling out of vogue. But maybe I’m imagining this. So here’s the question for you: Do you still pick up Uris or Michener novels? Or are there other historical novelists like the ones mentioned above that scratch your itch for extremely long-form historical fiction?

**Cletus says this in response to Lisa’s comment, “I think books have an amazing power to bring people together. Look, even Cletus is checking one out” — which is all kinds of right, but a topic for another post, perhaps.