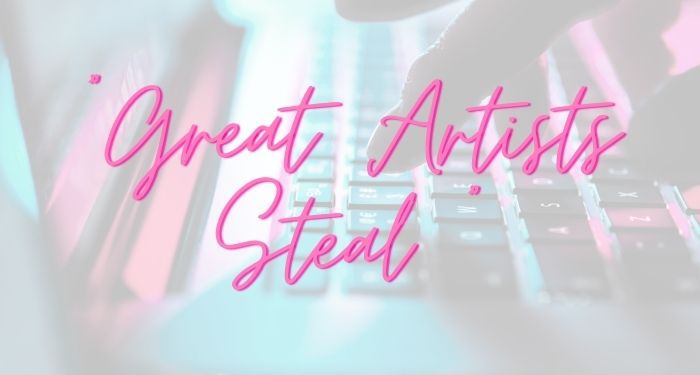 “Good artists borrow; great artists steal.” You’ve probably heard a version of this saying, which has been attributed to T. S. Eliot, Pablo Picasso, Steve Jobs, and many more. What does it mean, and where does it come from?

This saying has always irritated me. I find it vague, presumptuous, and ethically questionable. Some people use it as an excuse to justify plagiarism or appropriation. An extreme interpretation implies that the ends justify the means: that the production of “great art” justifies breaches of ethics. This feels like circular logic to me, conflating what some artists do with impunity with what all artists can and should do.

There’s also no consensus on what makes someone a “great artist.” If we all considered ourselves great artists entitled to steal from others, chaos would ensue. People who use this as their motto may assume they won’t get caught or trust others not to treat them as they do. In any case, it’s a hypocritical double standard for one’s own conduct.

In October 2021, during the “Bad Art Friend” controversy, many articles and social media posts repeated the saying “great artists steal,” uncritically and without context. At this point, I began to wonder about the origins of this saying: whether, ironically, the quote itself was fake or misappropriated.

In 2013, the writers at Quote Investigator (QI) researched the source and evolution of the quote “great artists steal.” QI found what they called “an intriguing precursor” to the recent saying in an 1892 article by W. H. Davenport Adams: “That great poets imitate and improve, whereas small ones steal and spoil.” Ironically, the modern version is the reverse: minor artists borrow or imitate, while great ones “steal.”

The first version QI identified that resembles our current saying is from T. S. Eliot’s 1920 book The Sacred Wood: Essays on Poetry and Criticism. Eliot wrote: “Immature poets imitate; mature poets steal; bad poets deface what they take, and good poets make it into something better, or at least something different.” Whether or not you agree with Adams or Eliot’s opinions, all nuance gets lost when someone tries to reduce them into a universal truth or a witty quip.

QI’s post traces several other versions of this quote across decades. However, the original quote “great artists steal” is spurious because it never occurs by itself. People quote it and falsely attribute it to William Faulkner and Pablo Picasso but cannot isolate its origin. QI also researched a similar quote that defines creativity as “concealing your sources” and is often falsely attributed to Albert Einstein.

The internet is full of incorrect or misleading information. Misrepresenting a controversial opinion as a wise saying or a quote from a brilliant person is disingenuous. When counterintuitive or ethically questionable opinions are incorrectly attached to a famous, brilliant person, that’s an attempt to legitimize them.

The original context of these longer quotes is also important. Adams’s article from 1892 condemned plagiarists and praised Alfred Lord Tennyson, a poet who often wrote about Arthurian legends. Eliot used many references to Greek mythology and the Bible in his own Modernist poetry. So, both Adams and Eliot were describing writers using allusions to much older works to create something new. Tennyson’s and Eliot’s audiences likely would have recognized these allusions, and indeed, transformative works have always been a part of literature.

The question of whether a particular work is derivative can be subjective and tricky. This post from Utah Valley University (UVU) praises The Lion King as a new take on Hamlet. Ironically, though, many people have pointed out the similarities between the 1994 Disney film and Kimba the White Lion, an anime series begun in the 1960s.

I agree with the UVU blog post that it’s best when writers are upfront about their influences. I love myth and fairytale retellings in general, but I think it would be baseless to call them “stealing” in any way. Most of them reimagine famous stories that are in the public domain. They wear their influences, their passion for literature, and their uniqueness, openly. They also allow marginalized authors to fight back against the bigotry found in classic literature.

Reinventing timeless stories and themes and making them your own is not comparable to stealing. The original, nuanced versions of Adams and Eliot’s quotes describe reimagining ancient ideas, like a lot of fiction and poetry today. They weren’t endorsing plagiarism.

As a fiction and nonfiction writer, I try to respect my and other people’s boundaries. So, I’m always frustrated to see the “great artists steal” line invoked to minimize plagiarism and invasion of privacy. Power dynamics, consent, and attribution are always relevant. Is the original work already published and widely recognized, or will plagiarists get away with theft?

Adams and Eliot’s specific literary criticism doesn’t make much sense if it’s removed from their historical context and reduced to a maxim like “great artists steal.” This short saying is an example of backwards logic, sometimes viewed as a license to plagiarize. The subtext is that unethical behavior is OK — as long as you don’t get caught. This is an excuse, not an artistic principle or universal wisdom. Some opinions will always seem immoral or illogical to me, regardless of who supposedly said them.