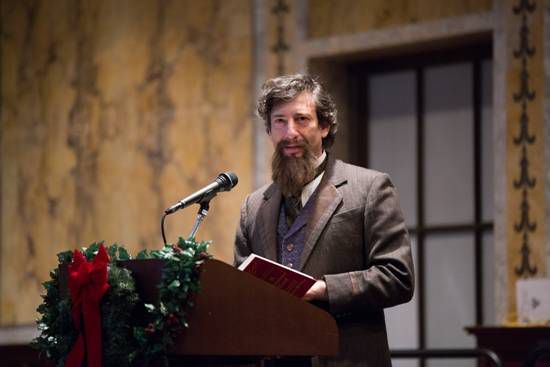 Back in 2012 – a time that seems, alarmingly, too recent and too long ago, both at the same time – one of my earliest articles for BookRiot was about my peculiar obsession with Charles Dickens. The peculiarity of my obsession as I discussed it at the time was that my interest was almost entirely in the person of Dickens himself, and not in the works of fiction written by him. A couple of years later, I still haven’t particularly taken to his fiction, although I’ve carried on reading biographies about him and his life and times.

So why is this? I touched on it briefly, two years back, but failed to elaborate as thoroughly as I could’ve on something which I refer to as a Diving Bell For History.

A “Diving Bell,” if you don’t know, was an old-timey way of going underwater with an air supply, in the days before we had any type of oxygen tank. A big metal bell would go down on the end of a long line, heavily weighted along the bottom. It would hover just over the seabed. Then a diver could swim down, go inside of the bell, and take a breath, before swimming back out and exploring. When out of breath, it was back into the bell. It was crude, but remarkably effective.

Charles Dickens is my diving bell, as it were. He’s one of three big ones. One is Dickens, the other are the pirates of the Caribbean (not the theatrical-looking one like Captain Jack Sparrow but the real ones like Blackbeard who wasn’t theatrical but instead…er…had lit cannon fuses tucked into his hair. Never mind.) The third one is Jack the Ripper. (Jack the Ripper is tricky, for me. So many of the books are obsessed with whodunit, and I couldn’t give less of a shit. I have very little interest in murderers. But the social hysteria and focus surrounding it fascinates me).

What is it about these particular people that attract me, and what am I gaining from obsessive reading about their lives and times? Aside from the tedious ability to lecture people at parties which I mysteriously do not get invited to?

How it works, I find, is by focusing a reading of history very tightly onto the life of a single person – or a single event, in the case of the Ripper murders, or the piratical era – I am able to almost get on the ground and look around in the past. It’s like sticking a lantern out of the Diving Bell and illuminating the bottom of the sea, to belabor my metaphor.

With these particular subjects, I’m able to read a vast amount about them, because they were insanely popular even in their own times. They were media frenzies, in their ways. With Jack the Ripper, it’s easy to see. It was the same with the pirates of the Caribbean, who were Robin Hood-like for their few years. With Dickens, he was very much the first superstar novelist, of a level of personal and literary popularity as we might expect in later centuries from J.K. Rowling or Stephen King.

What this means is that there was a great deal of attention focused on him at the time, and a great deal written by and about him. We know a lot about his life, and about the lives of the people who were around him, who were in their ways illuminated into history by their interactions with him. The routes he traveled and the causes he supported; the articles he wrote, the letters he exchanged. The dinners he attended. The opinions of everybody around him for and against him, and on a million related subjects.

As I read, I begin my focus on Dickens. Thus, the countless biographies and studies of him. But as I read those, other people begin to appear and soon I find myself reading the works of Wilkie Collins, friend of Dickens and fellow author. Eventually, I read biographies of him, and William Makepeace Thackeray, and so many other people. Through their interactions with the world, I begin learning about the events of the day. Not just the big ones (like a thwarted trip to America because of a pesky “civil war”) but little ones, like an orphanage fire or fund-raising events. And since these events are all fixed, they recur in their ways throughout everybody’s biographies and lives.

Soon, you can find yourself reading newspapers and articles written in the time period and know what they’re talking about. You are so immersed in the timeline, it’s people and geography and world, that you’ve fueled that lantern very brightly and gone out of the diving bell with it. Metaphor aside, it’s like you can almost close your eyes and dimly see the world and all its people, which you are reading about.

It’s exhilarating, when it works. It’s educational even when it doesn’t.

It works with moments in history that were social focal points in their own times or immediately after, as I said. That’s why it works with pirates and Jack the Ripper as well. However, it doesn’t work with other figures. Queen Victoria, for example, mirrors Dickens’ lifespan in many ways, but she was apart from society in a way that doesn’t make her as useful (though still a fascinating subject). Samuel Pepys is someone whose diary I love reading, but he also isn’t that useful…because he wrote about himself and his immediate day-to-day life and almost nothing else. He’s wonderful to read (he is so boring. He is such a schmuck.)

Pirates are the most recent addition to the list for me. I’ve had a shelf of books about pirates for ages, and I’d read most of it already. But lately, I’ve been playing Assassin’s Creed IV: Black Flag, a pirate game, and been enjoying using it as a jumping-off point to reread biographies and histories of pirates.

Dickens remains the big one, though, and perhaps he always will. Maybe he’ll be useful for you too, if you’re interested in what I’m talking about, or maybe you’ll find your own subject which you can use to get on-the-ground and examine a period in history. It’s terrific fun and as I’ve said, there’s nothing quite like swimming out from under that diving bell and into a moment in history, dimly illuminated but recognizable all around you.

It’s the closest I’m going to get to time travel, unless a mad man in a blue box turns up, and it’s both fun and educational at the same time. Can’t beat that.