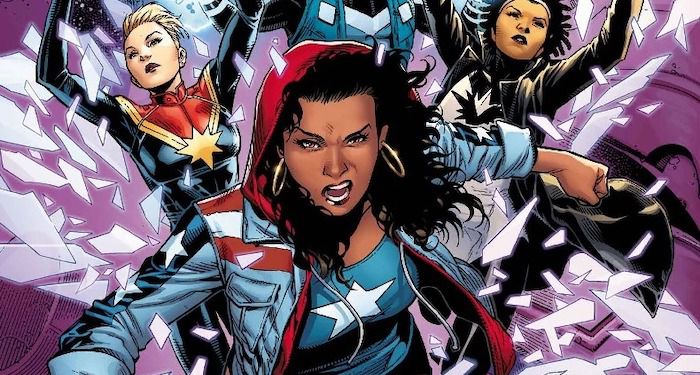 Being a Puerto Rican woman and proud of it, as well as a huge comic book lover, representation in comics really matters to me. Whenever I see any sort of diverse female character reflected on a comic book page, my heart swells with joy, because that means those like me are being seen. While I have some favorite comic book heroines, such as Wonder Woman and Harley Quinn, lately I’ve been craving to see more female characters in comic books that look like us — us diverse women from every background and with different cultures and points of views.

To me, female comic book representation is something that creators have been slowly inching towards, giving us diverse women something to look up to. Take for example one of my favorites, La Borinqueña, created by Edgardo Miranda-Rodríguez, whose Puerto Rican background inspired him to create a story with a strong female superhero at the helm. La Borinqueña tells the story of Marisol Rios De La Luz, a Columbia University Earth and Environmental Sciences undergraduate student living with her parents in Williamsburg, Brooklyn. Inspired by her heritage, she takes a semester of study abroad in collaboration with the University of Puerto Rico, where she discovers five magical crystals after exploring the island’s caves. After that, she unearths some explosive powers within, which are inspired by Puerto Rico’s deep history and mystical tales. I remember attending New York Comic Con in 2021, and Edgardo’s booth was one that I and many boricuas gravitated toward, purchasing his comics and merch, such as buttons representing the superhero and our culture. Many of them were women. To me, this makes me realize that girls like me are hungry for more representation, something that is highly needed in a pop culture comic book world where superheroes are mainly male or white. While there is nothing wrong with these characters and many look up to them, I feel like certain voices need to be uplifted in this type of literature. And one very important voice is that of women from a Latin background.

Recently Edgardo Miranda-Rodríguez had actress Rosario Dawson, of Afro-Cuban and Puerto Rican ancestry, collaborate with him and grace the cover of his comic: he drew her as La Borinqueña. Edgardo and I have cultivated a friendship, and he told me:

“The internet has given a voice to the voiceless. Social media has empowered an audience to tell mainstream publishers and studios ‘¡presente!’ However, this doesn’t always translate into characters that are accurate or rooted in real world history, culture, or places.”

Female characters rooted in culture and diversity are extremely important, and we see this happen with characters such as Naomi McDuffie, a character from an alternate universe in the DC Comics world that also inspired a recent CW network show. Naomi was the first child born from two metahumans, who came from an unknown past radioactive energy that affected the Earth. What I love about the Naomi comics and story is that her character represents a powerful Black teenage superhero, one that young Black girls can look up to and feel represented by. Naomi’s super strengths, which include the power of flight and energy manipulation, are impressive. It’s not just about this female superhero having unique superpowers, it’s about what this symbolizes: that diverse women can truly fulfill their destiny, find strength within themselves, and showcase their strengths in front of their male counterparts. As a teen growing up in Puerto Rico, this is something I always craved when it came to my comic books. Comic book characters might be filled with fantasy, but they give us not only an escape but also hope and connection with others. It’s refreshing to see girls at Cons, which I love to attend, cosplaying as characters such as Naomi and La Borinqueña. It’s also great to see them happily mingling with the other creatively-dressed girls, and finding a community with each other.

Another fantastic female character from the Marvel universe, recently portrayed and represented on film in Dr. Strange in the Multiverse of Madness, is the LGBTQ Latina America Chavez. In her background story, Chavez was raised by her mothers in the Utopian Parallel, those who sacrificed their lives to seal Black Holes that at the time threatened to destroy the Utopian Parallel when Chavez was 6 years old. This led to their particles occupying the Multiverse, and Chavez escaping and traveling across different multiverses and eventually coming into her own strengths. Chavez also identifies as Puerto Rican, and the fact that she was raised by a queer couple and is also LGBTQ herself, means that a lot of girls who identify as such will feel like they could possess the confidence and power to be strong and a superhero in their lives as well. The fact that this character is now showcased on the big screen in a big-budget Marvel film gives a lot of us hope that there will be much more to come for us to look forward to when it comes to representation.

I could shout from the rooftops that it is important that these creators keep going in this direction for a long, long time. As Edgardo said about culture and representation, social media has become a driving force when it comes to us and other underrepresented communities speaking out about what we want to see in comics literature and adaptations. While this is not the only outlet to express our needs, I am excited to see we are being heard, and it’s loud and clear that in order for us women to be inclined to immerse ourselves in the fantastical stories that comic books provide, the creators themselves need to give us something to take pride in and speak to us if they want us to support them as well.

So, let’s hear it for the girls. Let’s keep supporting these powerful and diverse female characters so we can hopefully see many more of them in the future. While we still have a long, long way to go, I am really looking forward to a brighter and fully creative future where our voices will be heard and represented further and in different stories. And this, in the end, gives this Puerto Rican gal hope that other young girls will see themselves in comic books in the future just like I craved when I was a tween and teen myself. I’m looking forward to future comic book tales that will be sprinkled with our unique cultural and diverse backgrounds. And that’s a beautiful thing to hope for.

What other female superheros that represent diversity in comics do you love? What type of characters do you hope to see in the future? Let me know on Twitter @AuroraMiami. Stay powerful, always.