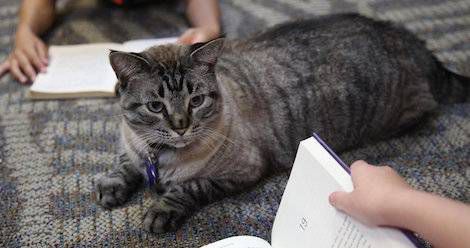 Our librarian staff and contributors have hand-picked some of the most interesting topics affecting libraries at this very moment — cool projects, innovative programs, awesome people, important news — and gathered them here in a handy digest for everyone who hearts libraries as much as we do. It’s our monthly open love letter to libraries.

This month we talk about a fired library cat, the first African American Librarian of Congress still isn’t confirmed, a library forgives $600,000 in kids’ fines, and more.

The Story: The U.S. Senate has delayed Carla Hayden’s confirmation as the first African American Librarian of Congress for OVER A MONTH

What It’s About: This press release was put forth by the American Library Association on June 9th, when a small senate committee voted on moving Carla Hayden’s confirmation as Librarian of Congress to the Senate Floor, where the final vote for her confirmation will take place.

Why I’m Talking About It: The Senate STILL hasn’t voted on her confirmation, and they’re about to go on their summer break. When they get back to session, they’re going to be incredibly busy and continue to push back the vote. Our Senators need to hear from us and know this continued avoidance of confirming the next Librarian of Congress is unacceptable.

What It’s About:  Two weeks ago the city council of White Settlement, Texas, voted to banish Browser, a cat, who has resided at the public library for the past six years. But due to a worldwide outcry, they reversed their decision, unanimously agreeing that Browser could stay.

Why I’m Talking About It: HOW CAN YOU EVICT A CAT???? He didn’t even do anything. Supposedly they decided to kick Browser out in retaliation for another city worker not being allowed to bring a puppy to work. These are elementary school antics. They’re smart to change their mind before Anonymous decried them as cat haters and published their private emails and home addresses on the internet.

The Story: Multnomah County Library Will Waive Over $600,000 in Fines, End Late Charges for Kids

What It’s About: Multnomah County, which is the Portland, Oregon, library system, is getting rid of fines for those under the age of 17. They’re also choosing to waive any outstanding current fines for that same demographic.

Why I’m Talking About It: Fines *are* a part of a library budget, but the truth of the matter is, kids lose out big time from them. In my experience working with the under 17 set, those kids accrue fines (often they don’t realize it — they forget to return a book or two for a few days and that begins to add up), then they get their library cards blocked. That block denies them access to not just checking out materials, but also to using technology in the library. When the kids fine they’re unable to use library resources, they don’t pay the fine; they just stop coming to the library. This disproportionately hurts the less wealthy, meaning those who need access to things like computers at the library to do their homework.

What Multnomah realized was that they weren’t going to get the money from these kids anyway, and thus, blocking their access to the library was benefitting no one. It’s a smart move and one I’d love to see replicated. Even if other libraries can’t offer the same sort of program, there are smart ways to help kids tackle those fines and be able to engage in the library. At one point in library world, I let kids “read down” their fines. If they read a book and wrote me a short review, I’d waive a buck off their fines. It was a nice way to get them reading, get them writing, have them checking out materials, AND have them “pay off” the fine.

(I haven’t even touched upon the number of times I learned adults had racked up fines high enough on their personal cards to get blocked, so they’d use their children’s cards and get those blocked with high fines.)

What It’s About: Matt de la Peña is the winner of the 2016 Newbery Medal (best book for children presented by the American Library Association) for Last Stop on Market Street, illustrated by Christian Robinson and published by G. P. Putnam’s Sons.

Why I’m Talking About It: The Newbery Award is a BIG DEAL in the library world, especially for children’s books. The winners tend to stay in print and be used in classrooms often. These are the children’s books that get passed down through generations and have lasting staying power. Even though I’m not a children’s librarian and don’t often read picture books, de la Peña’s speech moved me to tears. The constant refrain of the speech is: “I had never known, never even imagined for a heartbeat, that there might be a place for people like us.” It’s a good reminder of why libraries and the publishing world should embrace diversity. Stories are powerful.

The Story: Video Calls in Brooklyn Libraries Will Help Inmates to Stay in Touch with Their Families

What It’s About:  The Brooklyn Public Library ‘s innovative Telestory program was recently awarded almost $400,000 to expand its programs in more libraries.

Why I’m Talking About It:  The program focuses on creating a warm and comforting space for children, aged 0-10 to interact with incarcerated relatives. I love that the program plans to offer the same set of books to both the visiting families and the incarcerated person so that they can read together as part of the visit.  As a children’s librarian, I find this project really inspiring and a great example of how libraries can serve their communities–particularly those communities that are so often overlooked.

What It’s About: Public libraries across Sydney are holding events, exhibitions, talks and panel sessions about comics, bringing together the comics community and the library community in Sydney.

Why I’m Talking About It: This started in 2014 with a comic convention in one library, and is a multi-day event across fourteen libraries in 2016. I love seeing the different forms of reading promoted by libraries, and how they connect with all kinds of creators, readers, and creative communities across the city. Another great aspect of this is how it promotes local comic culture and artists, and promoting local authors, illustrators and events/history is a huge part of public libraries. This also seems like a very fun week of events that I wish I was back in Sydney for. Check out their Facebook page here!

The Story: Librarian Turned Journalist: How Columnists Bridge the Gap Between Media and Library

What It’s About: The ways in which librarians connect with the community through library-centric newspaper columns.

Why I’m Talking About It: I wrote this piece for MediaShift, as part of a series on Libraries+Media, and I loved getting to talk to two very different librarians who wrote columns for their local papers. Julie Winkelstein in California used the space to talk about librarians-as-social-justice-advocates: how libraries and librarians help communities with technology and literacy, libraries and the homeless community, how funding impacts libraries – and she let readers in on new libraries she visited through her travels. And David Kent in New York is a library director who writes for his village paper, discussing library events, author visits, and connecting the community to books through events like the local baseball team’s successes. Both have excellent rapport with their editors and community, and saw their libraries thrive through their weekly columns. It’s inspirational for me as a librarian and writer, and good to know what librarians are doing, above and beyond, to serve their communities.

What It’s About: Libraries are more relevant than ever, providing community classes and resources on everything from sewing and job skills to meditation and coding. New York City is reaping the benefits of increased investment in public libraries, that are delivering 21st century services while remaining committed to books and literacy.

Why I’m Talking About It: While this article focuses on New York City, this kind of renaissance is happening in libraries across the country. In communities where libraries are properly funded, they are responding to community specific needs that support creativity and lifelong learning and addressing the digital divide. Instead of just looking at libraries through one lens and framing the institutions as abandoning books for the sake of technology or as hopelessly irrelevant in the internet age, this piece actually paints a nuanced picture of what’s happening inside libraries today.