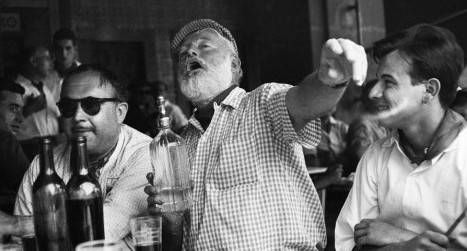 This is a guest post from Shara Lee. Shara is a former editor turned higher ed marketer. She has tendencies toward internet procrastination, Netflix, and stories featuring strong female leads. Follow her on twitter @shara_lee.

My curiosity about the lives of writers compels me to perform Google searches on every new author I encounter before reading any of their books. For me there’s something fascinating about discovering the lives behind great creators. So when it came time to choose a honeymoon destination last summer, of course I opted for a place with a famous writer association.

After much deliberating and debating, my guy and I agreed on Cuba. We went for the Varadero beaches, the Havana hotspots, and to be completely honest, as a Canadian, part of me wanted to visit Ernest Hemingway’s Cuba before the gates to American corporations were re-opened and the country risked losing its romantic time-preserved appeal.

Pre-1962, Cuba at just over 100 miles off the coast of Florida, was the go to destination of the stars. Marlon Brando, Ava Gardner, and Frank Sinatra were known to have flocked to Havana along with their Hollywood posses. But those personalities, while still known in Cuba, don’t hold a flame to the name Ernest Hemingway. His ghost still lingers over the city in a very tangible way. Ask any Cuban to point you in the direction of Hemingway’s bar, hotel, or villa, and they’ll have no trouble giving you clear turn-by-turn instructions.

The city of Havana dazzles with its Spanish colonial architecture and colourful art scene. The streets are lined with ’50s Cadillacs, Chevies, and Oldsmobiles in every colour imaginable, giving the city a very authentic throwback vibe. You almost feel as if you’re transported back into the scene of a 1950s Cuban postcard.

While in Havana I was on a mission: I would visit as many of the places that Hemingway frequented as possible and maybe be inspired as he was. Our first stop was El Floridita where in the corner of the watering hole, a life sized Hemingway statue leaned on the bar. Above the statue was a framed photograph of Hemingway with the infamous revolutionary, Fidel Castro. We only stayed long enough for me to get a picture with the statue, then we were off. I wanted to stay longer, but we had rented a classic car for only one day, and our guide was anxious to shuffle us off to other touristy Havanese locales.

The second Hemingway stop was La Bodeguita, a tiny hole in the wall bar famous for its mojitos. A framed inscription signed by Hem himself hung high on the backbar and read, “My mojito in La Bodeguita. My Daiquiri in El Floridita.” Bottles of “Havana Club” rum of various ages and shades from clear to dark brown lined the shelves behind the bartender.

Our last (and my favourite) Hemingway stop in Havana was Los Ambos Mundos, Hemingway’s hotel of choice while staying in the city. The original exposed elevator took us up to the fifth floor and and for a couple of CUCs we were given private access to his room. It was in that room that he was said to have written, For Whom the Bell Tolls. Things were left exactly as he would have had them: bed neatly made (and much smaller than I expected), sheer white curtains pulled back letting in the glorious Cuban sun, typewriter and desk placed facing the shuttered windows overlooking old Havana—truly the perfect “room of one’s own.” Ironically, the only thing that shattered the authentic Hemingway vibe were the framed clippings and typed obligatory background information detailing Hemingway’s literary achievements that hung all around the room.

After a long day of exploring, and to give Papa the toast he deserved, we ventured up to the rooftop patio of Ambos Mundos where the bartender mixed us up some very minty mojitos. There we sat enjoying the view, and reflecting on Havana past and present until our driver told us it was time to go.

Visiting Hemingway’s favourite places made me admire the singular focus he had—He lived to write and even went so far as moving to a foreign country in order to nurture his creativity. Seeing one of his most creative spaces made me crave my own little perch: a place to write, a place to read, a place to be inspired, but most of all, time to do all of these things. For now I’ll keep planning my literary escapes, carry on with my 9-5, and on the second floor of my suburban townhouse, clear some space on my perpetually cluttered kitchen island for my tattered copy of A Moveable Feast and a strong cup of Cuban coffee.