One of my favorite daydream pursuits is the Dinner Table in the Sky – deciding who, living or dead, I’d like to round up for an imaginary meal. Great writers and raconteurs are an especially rich source for a guest list. Imagine pulling up a chair with Orhan Pamuk, debating barbecue with R. W. Apple, or asking Mark Twain about his latest travels. And wouldn’t Henry Fielding have fantastic bawdy gossip to share?

For your invitations, don’t always choose people whose work you admire. Instead, consider who would make for the best company – the people you think would roll out hilarious stories and bon mots, pour the wine generously, and generally play well with others. For the paralytically shy, attention hogs, and sourpusses, steer clear. After all, Evelyn Waugh was a brilliant writer but no one would accuse him of bonhomie and he’d also guzzle all the good Champagne. (Of course, there’s something to be said for a volatile mix, when a handful of strong personalities start scrapping after the brandy arrives.)

There’s the seating arrangement to consider, too. Who would get along well with their neighbors and keep the conversation flowing? Neil Gaiman and H. G. Wells would probably join forces over the appetizers and concoct a dozen new ideas. Zora Neale Hurston and James Baldwin might start singing over the soup. And who, most importantly, do you want to your left and right?

So who would you have at your table? Here’s a seating to get us started: British authors, party of eight. Disraeli (and for him, I must credit my dad for the suggestion) far preferred the company of women, so he gets to sit next to Jane Austen. Christopher Hitchens, on his other side, could spar with him about religion and politics. Anthony Lane and Simon Schama would chatter up a storm, bridging between history and art. Schama could also ask a few zingy questions of the shy E. M. Forster. As for Ewan McGregor: he did write a book, so he counts; he would be a twinkly neighbor for Forster and help draw him out; and most importantly, he’s in my direct line of sight. 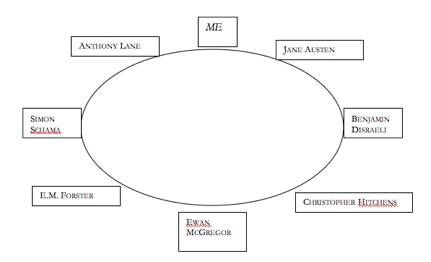