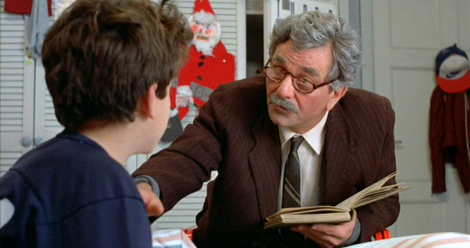 On my first read of The Princess Bride at age 13, I was amused and enchanted by the thought that S. Morgenstern had written a boring royal history that William Goldman had abridged into a masterpiece. I told my father so, and he looked at me, thought for a moment, and said that he didn’t think that was true. I realized my mistake. Of course it wasn’t. There was no Florin. There was no actual Inigo Montoya. But it was a rather depressing thought.

So several years later, when I read the 25th anniversary version, and it had all of this compelling, real-sounding information (wait, there’s a museum? they’re all real? the entire story is based on a true royal history! it is true!), I simply chose to believe it.

That’s how talented an author William Goldman was. After his passing in mid-November, countless readers have posted about believing: yes, his grandfather read him the “best parts” version of an old dusty classic by S. Morgenstern when he was young, and yes, this led him to take an actual book and abridge it into the classic The Princess Bride we hold in our hands today. Framing devices can be awkward, weak, but so many of us were fooled, or allowed ourselves to be fooled. Even now, as I write this, there’s a small voice in the back of my heart telling me that I’m wrong, and that Morgenstern did write an original.

I’m not the only one who had this experience, as evidenced by these many wonderful tweets:

While I later wrote a thesis on the minutiae of economic strife between Florin and Guilder and its ties to the respective travel rituals of each nation, I would never have made it through those dense chapters in Morgenstern’s work without Goldman’s careful editorial to guide me.

Part of the brilliance of the framing is that Goldman never once wavered. An account of historical letters posted the letter that Goldman would send to his many readers begging for the reunion scene or asking about the original book. He claimed in these letters that he was being sued by the Morgenstern estate, and that this was keeping him from releasing any further works from that world:

RIP William Goldman. This is the letter he sent to readers keen to know about the missing ‘reunion scene’ in The Princess Bride. pic.twitter.com/dUuoDk7Zy5

Even as I write this, I still sort of believe. And I won’t tell you what to believe either, dear reader. Because, in the end, as in all good writing, Morgenstern’s work is real enough. The original The Princess Bride, William Goldman’s story about his grandfather, Fezzik’s size and Montoya’s quest for revenge, Westley and Buttercup’s love story—those are real in all the ways that matter.