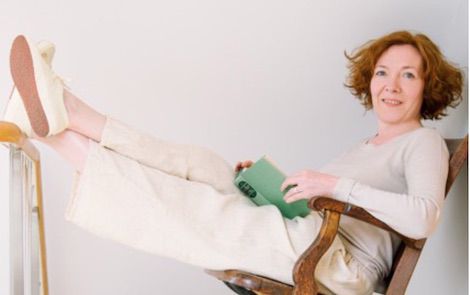 In an ancient inn by the River Thames a group of men and women gather on the longest night of the year to tell stories about a 14th century battle that had claimed the lives of eight hundred men. As the stories inside the inn unfold, the door bursts open and a man with monstrous injuries appears in the doorway holding a drowned little girl. The girl has no pulse and isn’t breathing; but hours later she stirs, coming back to life.

Is the girl’s resurrection a miracle, or is there a scientific explanation? 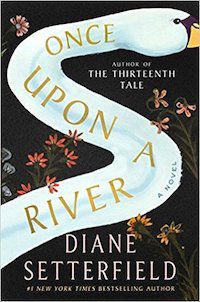 Diane Setterfield’s new novel, Once Upon a River, is an agglomeration of folktales, science, and faith– an homage to classical mythology, George Eliot, and Darwin– it’s a meditation on grief and the churlish power of a great river. This is a story about the relationship humans have with nature, and nature’s ever-constant source of nourishment and calamity. It’s a marvel.

Diane Setterfield’s first novel, The Thirteenth Tale, was a #1 New York Times bestseller, has been reprinted 26 times, and has been published in 38 countries. She lives near the Thames, but as you’ll read, she’s (unfortunately) never seen any actual corporeal beings on the river…

This has been one of my favorite books this year. I love a good Victorian- era yarn, but (BONUS!) this also includes allusions to classical myths like Orpheus and Eurydice; Demeter and Persephone; and even a little bit of Dickens– I’m obsessed.

Sarah Ullery: It’s been twelve years since your first novel The Thirteenth Tale, how has your writing process changed since writing that first book?

Diane Setterfield: The writing of this book was actually very like the process of writing The Thirteenth Tale.  I began with a hazy sense of a couple of characters, a distinct idea of an atmosphere, one or two concrete ideas.  There was a false start, a new beginning, a lengthy period of wondering whether I had been madly over-ambitious, a distinct falling out of love with my material, followed eventually – thank goodness – by a reconciliation!  I was often in despair, frequently feared I couldn’t do it, but often enough came the good days, when my early excitement about the child who came back to life returned to me and reinvigorated the writing.

SU: I found an old review of Charles Dickens’s novel Our Mutual Friend that referred to the Thames as “the old horror”. The Thames is what drives the plot of Once Upon a River. Would you consider the Thames to be a force of good or evil, or are the characters’ relationship with the river more nuanced?

DS: Good and evil are human characteristics and cannot be attributed to the natural world, even though it’s tempting to want to do so.  Certainly good comes to human beings from the river, just as harm comes from it, but the river predates humanity and will no doubt outlast it and is essentially indifferent to it.  It’s part of the arrogance of our species to attribute human qualities to nature (and I can be as prone to that as anyone). Perhaps the best way to answer your question is to say that the human need for water is so profound that we have, over the millennia, endowed it with all kinds of superhuman characteristics, and this magical thinking has been one of the cornerstones of our culture.

SU: Speaking of Charles Dickens, I couldn’t help but draw parallels between Once Upon a River and Dickens’s novel Our Mutual Friend. In both novels the river is a source of death and violence. The characters’ lives and livelihoods are dependent on the river. Is this a fair comparison? Was Dickens an inspiration?

DS: It is certainly true that the river is the lifeblood of the local economy.  The drinkers at the Swan all have working lives connected with the river: they grow watercress, they are gravel diggers, they are bargemen.   I knew that Our Mutual Friend was set on the London Thames, and I believed I hadn’t read it, yet when I bought it early in the writing I was surprised how familiar it seemed.  Perhaps I read it as a young teenager before I started to keep my reading diary. I think I was most conscious of Dickens when I was writing the character of Ben, the butcher’s boy.  He owes a lot to Dickens’ child characters in his pluck, his self-reliance, and the great care he shows others despite his own poor start in life. The other great river book that I was conscious of – though it’s decades since I read it – is The Mill on the Floss, by George Eliot, which ends with a brilliantly dramatic river scene.  I bet that laid down some of the preparatory work in my imagination years and years ago!

SU: At times it felt like there were supernatural elements at work on the Thames. There’s Quietly, the man that’s said to ferry the souls of the newly dead across the river; the little girl that’s found nearly dead in the river is thought by some to be a changeling. But at the same time the characters discuss Charles Darwin and evolution as if they’re the most absurd ideas they’ve ever heard. Why do you think it’s easier to believe in changelings and ghosts rather than man evolving from monkeys?

DS: It was the age.  It’s easier to believe in the things your parents and grandparents believed in than a brand new idea – especially when the new idea must have seemed so demeaning to humankind.  Man had grown used to thinking himself entirely separate from the rest of the animal world, for Christianity taught that he was made in the image of God. It’s hardly surprising that people with little power in the world were attached to this superior self-image.

Once I knew that I wanted to write the story of a child who drowned and lived again, it was obvious to me that it had to be set towards the end of the nineteenth century, because people then had so many ways, new and old, of trying to explain the miraculous.  It’s not just that Darwin had come up with evolution – in the US William James was carrying out work that places him as a precursor to Freud, so you can also trace the beginning of psychology to this era. Yet traditional beliefs were going strong – Christianity was still a powerful influence on the way people perceived themselves and the world, and folk beliefs were still prevalent in rural areas and uneducated circles.  What I wanted to investigate was the way people use storytelling to create order when something happens that upsets the previous way of seeing things – and this period, with its new and traditional ways of seeing the world, seemed to offer a very rich vein.

SU: You live near the Thames. Have you ever seen any spirits on the river?

DS: Not once!  And if there were any, I’m sure I’d have seen them because I spend so much time there.  The magic of the river – if it can be called so – is the way that the river seems to free up my thoughts.  If I get stuck in my work, a walk on the bank will usually provide a solution to whatever knotty plot problem is troubling me, or at least suggest a new way of thinking about it.  And if I don’t come home with the answer, at least I get some fresh air in my lungs and the pleasure of observing of nature, which means I can live better with my disappointments about my creativity.  If you want to call this the ‘spirit of the river’ I don’t mind!

SU: Storytelling and the power of stories on the characters’ lives was an important component of this novel. What were some of your favorite childhood stories?

DS: I borrowed When Marnie Was There, by Joan G Robinson from the library over and over again.  I never tired of the setting and the ghostliness and it taught me the word samphire.  When someone gave me my own copy a few years ago it was one of the loveliest gifts I’d ever received.

SU: I felt the influence of fairy tales in this book. Did fairytales influence the story? Was there a specific fairy tale that you were thinking of? Do you have a favorite fairy tale?

DS: I have a new one every week!  Bluebeard is a long favourite of mine though.  I love the way writers such as Angela Carter reinvigorate the fairy tale tradition.  Philip Pullman too.

When I was writing Once Upon a River I had classical mythology on my mind: Orpheus goes to the underworld to bring back his beloved Eurydice, and the goddess Demeter sends Hermes there to retrieve her daughter Persephone.  I was fascinated with these ancient tales of returns from the land of the dead, but knew that my characters – ordinary working people with only a few years of education – would be unlikely to have a familiarity with the classics.  So I transposed the themes to a brand new folktale and invented the story of Quietly. Writing it was one of the greatest pleasures of my career to date.

DS: One characteristic of Robert Armstrong will be recognized by my family, for it belonged to my grandfather.  At mealtimes he always insisted that the little ones should be fed first, and his motto was: I’d rather starve than see these children go without.  It was only when I reached adulthood that I understood he had known hunger as a boy.  As for Rita, I lent her my own fear of childbirth – but in her it is well-founded. In the nineteenth century labour was much more dangerous for women than it is today.

I think there are two keys to the creation of rounded characters that spring to life in the reader’s mind: firstly, the author must submit to the characters, always accepting that they know best; secondly, you can’t rush it.

SU: Many authors say that they cannot read while they write, are you that way? If not, what were some of the books you read while writing this novel? Was there a particular book that you found inspiring?

DS: If being a writer meant I couldn’t read, I would stop writing!  Writing is the best job I’ve ever had, but I could survive without it.  Reading on the other hand is essential.

I read hundreds of books while writing Once Upon a River, but it takes years (decades even) for what I read to percolate into my writing brain, so it’s more likely to be the books I was reading ages ago (and have mostly forgotten consciously) that influenced it.